"Looking back" posts sure do remind me of just how many good times we've had in 12 short months and how very blessed I am to be a part of such an adventurous and fun-loving family. Here's the Mommy-chosen highlights of 2010 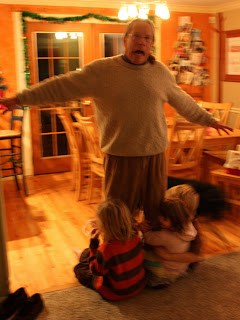 Buddy (that's my dad's "grandfather" name) certainly gets plenty of "affection" when he comes out for a visit. Between the kid massages and leg weights, it's a wonder he always leaves Utah in one piece. I'm still not quite sure how three kids, all overcome with the hilarity of their antics, manage to stay fixed on Buddy's two legs, but somehow they do!

The new game this trip was giving Buddy "deep tissue" massages.  It started with (what else?) toilet paper draped over the sore area and ended with leaping and pouncing.  It all looks so relaxing... good thing Buddy is in good shape and is such a great sport! 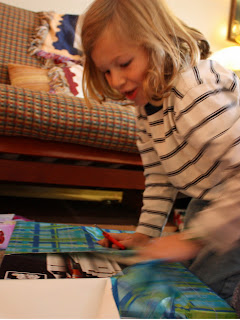 I got a Lego Space Shuttle for Christmas.  I liked opening it.  I was so surprised when there was a Bible inside and a note that said other gifts would give me scriptures that had clues in them.  It was fun finding it!

One of the scriptures were, "He who enters his house must first wash his clothing" - washing machine!  It was tough finding the pieces.

[Editor's note:  in case that was unclear, we tortured Sam with a treasure hunt where the clues were scripture references that led to portions of his Lego Space Shuttle kit, such as Genesis 44:12 leading to Ben's backpack.  I thought it was creative... Sam thought it was needlessly painful.  In my defense, he's the one who asked for a "hard" treasure hunt this year.] 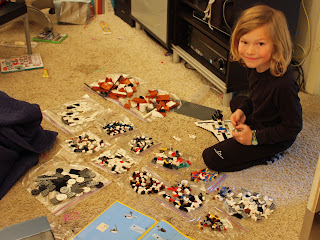 Hence the fact that it's Lego and a Space Shuttle and two days worth of building, you can guess I had a lot of fun with this. The space shuttle has got a shuttle arm, landing gear, a pilot seat, booster rockets, and an external fuel tank, plus a launch pad. I think it's pretty cool, I like it. 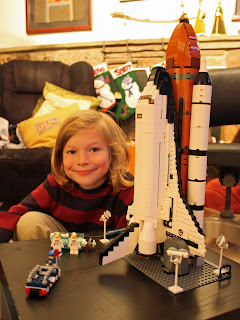 It had 1,204 individual Lego pieces. With that kind of stuff, you can imagine what I could make if I took it apart and built it with my imagination. But I want to keep this together for a couple of years, it was tough. 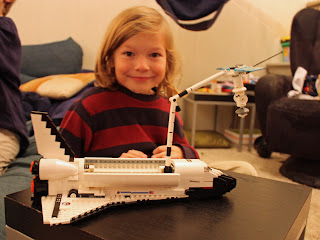 How I Spent My Christmas

This year we decided to try something different - we opened gifts on Christmas Eve and then on Christmas Day we hit the slopes!


Only one Mary Head and two Donkey Legs were harmed in the (re)making of this holiest of nights.
Posted by Jstar 2 comments: Links to this post