Risky Love (no, not that kind!)

I've been thinking about this topic for a while, and I think it's important to record, to remember the significant things that God is teaching me in the current season of life. Jesus is the perfect teacher, and he'll re-teach me lessons as often as I need to learn them, but that's not my heart! I want to learn new things and go to deeper places of love and understanding; not keep re-learning the same thing over and over! Plus these lessons are usually pretty tough ones, so I'd rather learn from a tough thing once ;)

I want to get real about the inner fear I experience almost every time I reach out to somebody in love. Generally, this expression love includes a notecard and a stamp - the postal service is my medium and I'm just going to embrace it. But the reality is that I feel a little twinge of nerves every time I clip an outgoing letter to my mailbox. Over the past few years I've been learning about how love usually feels really risky at the time it is extended.

Here's an example of a delightfully common internal Jamie conversation:


Me: Oh, man, that's a funny pair of socks. My friend is going through a tough time. I bet she'd like a funny pair of socks.
Me: Or maybe she'd think I was a weirdo if I sent her a pair of socks. I mean, I don't really know her that well. I mean, I did know her really well a while ago but I haven't heard from her much lately. I know it's a tough time for her so I'm guessing that's why she hasn't reached out.
Me: Or maybe she just hasn't reached out because she just doesn't really like me. Or she thinks I'm too intense. Which is fine, but sending socks would probably seem like a weirdo thing to do.


Me: It's my three-year work anniversary! I'm going to take the time to write a thank-you note to a few people I'm really grateful to work with.
Me: You know that's not a thing normal people do, right? They'll probably think you're over-the top... or needy... or overly emotional... or just have too much time on your hands... or all of those things. Weirdo.

The first me in these conversations - the one feeling the impulse to love rather than the one second guessing it - is the one I'd rather be, and I choose to express the act of love that I'm debating. But let's not pretend that the choice is easy!

The hard part about these expressions of love isn't the time or the expense; it's how risky they feel. These gifts, these notes are an extension of my heart. They means I care, I care personally, and I'm willing to communicate that care. And all that feels scary because I'm risking the real, unguarded me. The sentiment may not be appreciated or reciprocated. I may even look like a weirdo.

But over the years I've learned and decided that I'd rather look like a hyper-loving, stationery-obsessed weirdo than to miss the chance to express love and gratitude to the people around me.

The allegory is not lost on me. All of the emotion above is just a little shadow of how God feels about us. Sending Jesus was the very definition of sending "an extension of his heart." His love, his gift, was rejected. The most beautiful, world-changing, eternity-impacting, personal gift ever given was seen as scornful by most.

God is using all of this to teach me a little more about his heart - his passion for joyful, sacrificial giving. His commitment to expressing his love no matter the cost.


This is how we know what love is: Jesus Christ laid down his life for us. And we ought to lay down our lives for our brothers and sisters.

Little Red is really fun. You have to train hard to do it. It's really fun and guaranteed that you're going to have a great time if you do it.

Little Red is a bike ride that you can do in Cache Valley. Only girls are allowed to do the bike ride. The guys can volunteer, though, to help around. 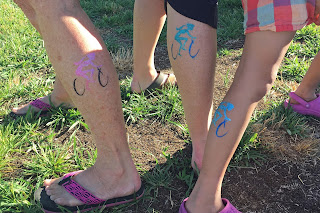 And there's many stands that you can go around to buy things, mostly bike things, though. You can get glitter tattoos - there's bikes and butterflies, but I don't know if there's any other things. I chose a bike, that's what I usually get every year. My mom and me got matching tattoos and they were blue and the tires were dark blue. Our gramma got one, too.

There's breakfast and there's lunch and there's dinner and there's tickets for the food but if you volunteer or you're a biker then you get free food. I really liked dinner. 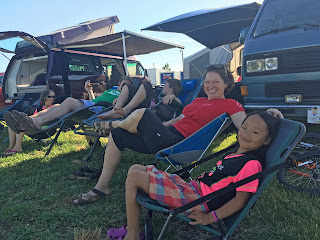 Volunteers have to wake up at 6, though.


It felt really good to do Little Red. There were rest stops each 10 milesish. At the rest stops there were Oreos with peanut butter and bananas on it! 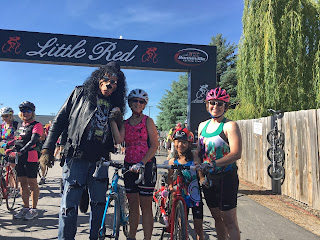 There was a huuuuuge downhill. We went 42.5 miles per hour down it. It was really fun. It was the biggest downhill I've ever done. 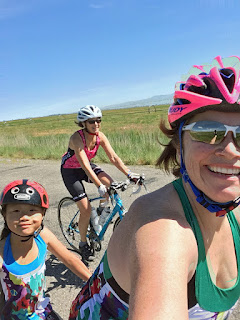 It was a bit chilly at some parts of the ride because we were going either really fast down a hill so there was a lot of wind or we were going so fast ourselves that there was wind. It felt hot in the afternoon.

It took us three hours to do the whole thing. I felt really good at the end because it was the longest bike ride I've ever done.