Although our late-season biking memories are (rightly) overwhelmed by the glory of our Tour de Donut victory, we did some darn fine rides in August and September that are worthy of recording. 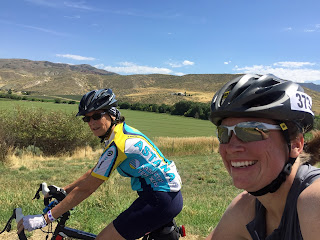 August's first triumph was the Wildflower Pedalfest. This ride kicked my ass last year - it was my first major ride after totally borking my ankle and I was so, so not ready for 3,000 feet of climbing over about 10 of the course's 75 miles. I completed the ride last year, but not with dignity or grace - that is, I completed it with a lot of tears and swearing.

This year Mom and I both did Wildflower and it was a ton more fun. I ended up in the top third of my age group, which I was a-ok with. I also never spontaneously burst into tears on the course - an even greater victory. 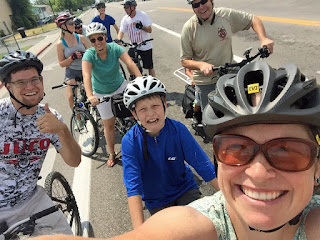 We also enjoyed some fun family-and-friends rides, including an after-church ride with our community group. It was a harrowing 11 miles so, never fear, we stopped for ice cream at the midpoint.

We sure do love our church! 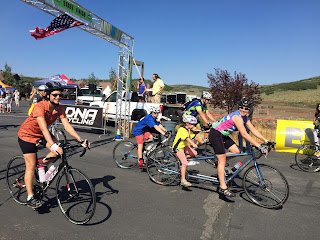 Next up came the Summit Challenge in Park City - one of our kids' first big organized rides. We signed up for the 18-mile course and it was just right - challenging for the kiddos but not so much challenge that it smashed their will to go on, which is what I normally look for in a ride.

Sasha was thrilled to complete the course on the tandem and Ben really held his own on the new road bike. And both kids stuffed their pockets full of Cliff bars and M&Ms at the rest stops, so I think they have finally figures out why cycling jerseys have such large pockets. 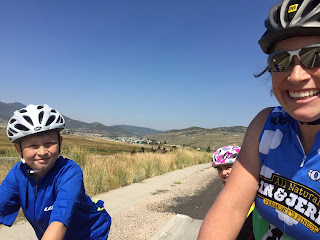 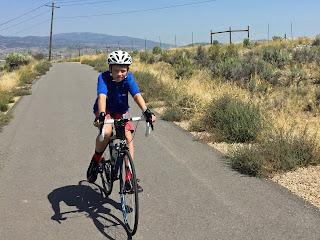 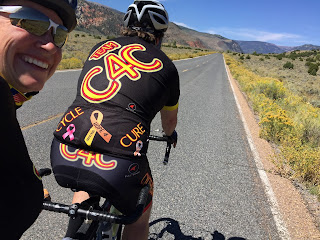 And the weekend before last brought us our first major tandem ride up in Tabiona, Utah at the To the Moon and Back ride. This was an... interesting... ride.

We signed up for the full century figuring that we had nothing to lose since if we got tired on the out-and-back course we could always just turn around. And, besides, I'm too much of a masochist to ever sign up for less than the full mileage. 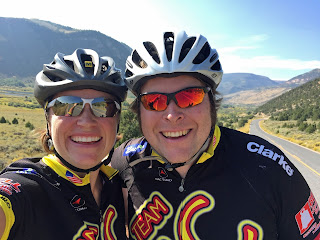 The day before the ride, the organizers announced that there was some construction on the original route and so they decided on a different turn-around point. This turned the ride into 110 miles with over 4,000 feet of climbing. And, in case you forgot, we signed up to do this on a tandem. Not exactly a climbing machine.

Long, grueling, tear-streaked story short, we ended up completing 90 miles and 3,500 feet of climbing and felt very, very satisfied with our effort. It was a beautiful course and a fantastic day, but maybe next time we'll attempt it on our carbon road bikes instead.


Of course, the season is far from over! The days are getting shorter and we're starting to dream of snow, but we're also enjoying crisp fall rides and still-warm afternoons with golden sunshine. Never a bad time to ride!
Posted by Jstar No comments: Links to this post 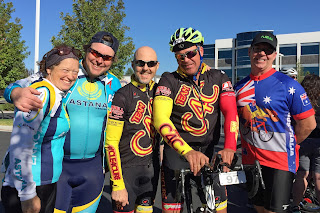 It's the race we've been training our whole lives for. 21 flat miles. 3 minutes deducted for each donut consumed. And a tandem division. 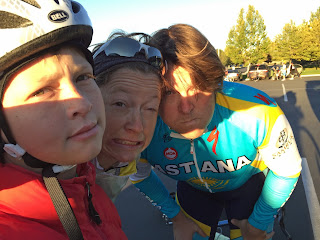 We woke up early.

We got our game faces on.

Yes, this is the best we could do (perhaps these are just our natural early morning faces). We're not really "sportsy" people so we haven't had a lot of practice at this "game face" thing. 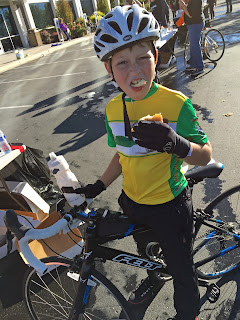 And then we rode our bikes and crammed donuts into our faces up to (but not surpassing) the point of yacking.

Here's how the Tour de Donut works: it's three 7-mile laps. After laps 1 and 2 you stop at tables and consume as many donuts as possible. These are then deducted from your total time at a rate of 3 minutes per donut. And all to raise money for the Rotary Club.

It's sheer genius I tell you. 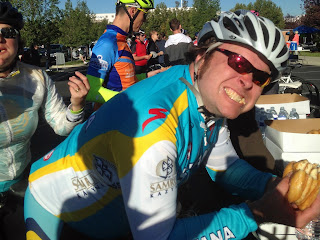 Newbies eat donuts one at a time.

We who know better put 3-6 donuts in a stack, squish them down, douse them with water for easier sliding, and shovel them in as quickly as possible.

Yes, it's as disgustingly awesome as it sounds. 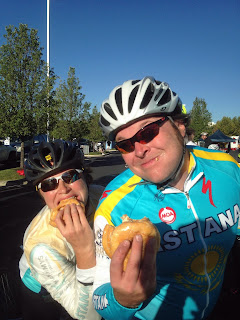 Steve pounded 11. I choked down 7. Our best effort? Maybe not, but it was enough.

You may recall that we rode the Tour de Donut last year. It was 45 degrees and pouring rain. It was completely miserable and hilariously fun. When we won 3rd place in the tandem division while pulling the girls, we knew we were made for better. We knew that our combined fat consumption power could propel us to first.

So in faith (yes, I'm going to call it faith) we registered for the tandem division. And then we bought a tandem bike and figured out how the hell to ride that thing before the race. Backwards? Maybe. But we seldom do anything the normal way. 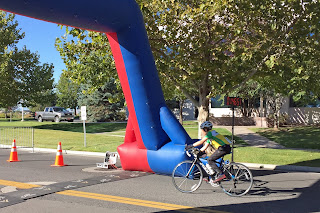 Here's Ben coming in for the finish. He rode his new 650mm Felt road bike and competed strong with 6 donuts consumed. We're not exactly sure how he placed because he was apparently registered as a female and the kid timings got all confused. So we'll just say he was the unofficial winner, cause, why not? 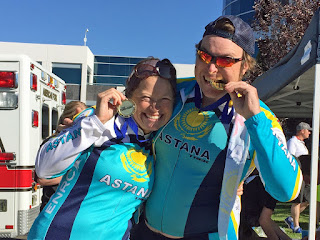 Steve and I came in with a very official first place in the tandem division.

Yes, my favorite thing about this picture is Steve's belly peaking out beneath his jersey. Because, let's face it, 11 donuts have to go somewhere.

I have never been prouder to be a Morningstar.
Posted by Jstar No comments: Links to this post

Yes, I am aware that I have the most beautiful children currently on record. Yes, they always look terrible in school pictures. Yes, I get pro shots taken every year and it's still cheaper than school pictures. And, yes, I plan to show you every last lovely photo (ok, not really, but at least 2 per child!). 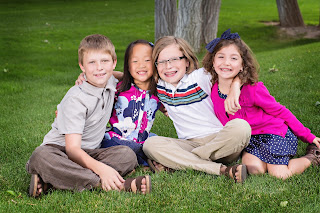 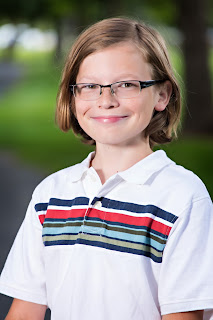 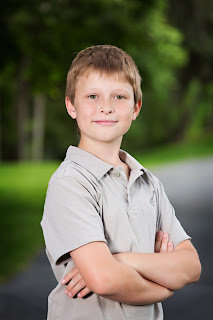 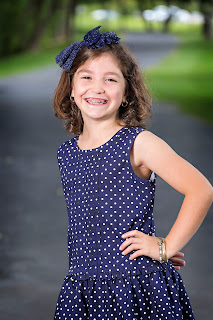 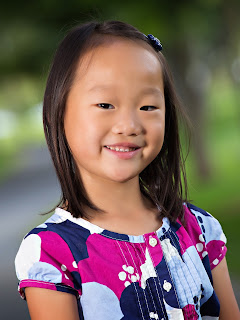 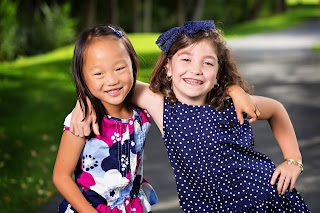 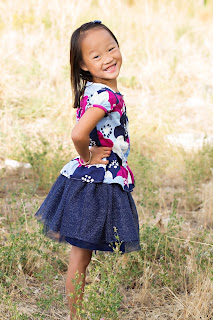 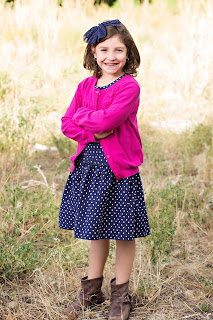 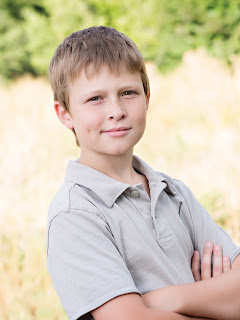 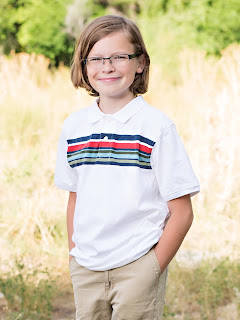 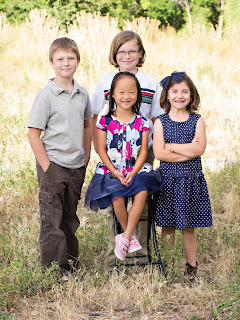