Forty Under 40 - The Party Continues 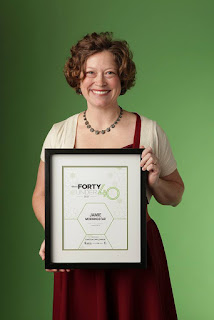 The award ceremony for Utah Business Forty Under 40 was this week and boy do I feel special!

A big crew from Qualtrics came up to Salt Lake to celebrate, the reception was lovely, I felt fab in my new dress, the video I recorded in January while suffering through the depths of a head cold wasn't too embarrassing - yeah, the whole afternoon worked.

It all leaves me feeling so grateful.

Grateful to work for an amazing company that I love;

grateful for a husband who supports me and believes in me; 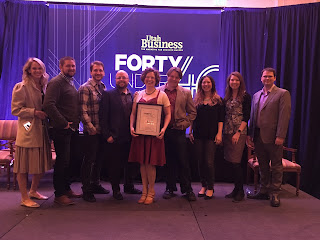 grateful to have dear friends who want the best for me;

grateful to be good at my job;

grateful for the conviction that my efforts in and outside of work make a difference. 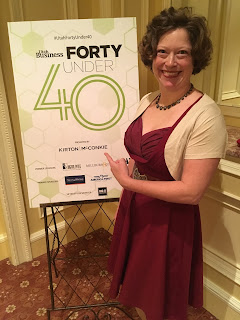 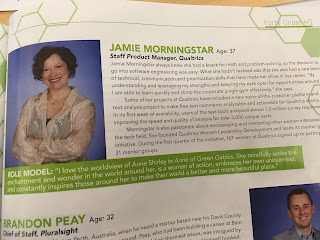 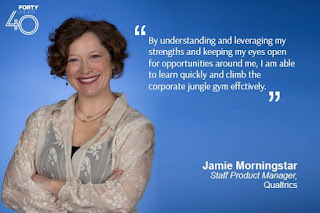 I'm super honored and excited to be in Utah Business Magazine's 2017 list of Forty under 40! The full article is here, the awards ceremony is tomorrow, and Qualtrics posted this cool blog post, too. Feeling pretty special and very, very grateful right now! 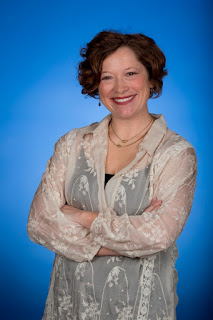 Jamie Morningstar always knew she had a knack for math and problem-solving, so the decision to go into software engineering was easy. What she hadn’t realized was that she also had a rare blend of technical, communication and prioritization skills that have made her shine in her career. “By understanding and leveraging my strengths and keeping my eyes open for opportunities around me, I am able to learn quickly and climb the corporate jungle gym effectively,” she says.

Some of her projects at Qualtrics have included a new voice-of-the-customer platform and a text analysis project to make free text comments analyzable and actionable for Qualtrics clients. In its first week of availability, users of the text tools analyzed almost 1.2 million survey responses, improving the speed and quality of analysis for over 3,000 unique users.

Morningstar is also passionate about encouraging and mentoring other women interested in the tech field. She founded Qualtrics Women Leadership Development and leads its mentor group initiative. During the first quarter of the initiative, 167 women at Qualtrics signed up to participate in 31 mentor groups.

Role model: “I love the worldview of Anne Shirley in Anne of Green Gables. She mindfully seeks the enchantment and wonder in the world around her, is a woman of action, embraces her own uniqueness, and constantly inspires those around her to make their world a better and more beautiful place.”
Posted by Jstar No comments:

The Best Day of My Life (So Far)

Saturday, February 18th has marked a momentous occasion in the morningstar household; Sam's(Henceforth known as me('s?)) 16th birthday. Upon this notable occasion much rejoicing occurred and much candy was consumed. The festivities begun at the early hour of 8:30 (teenagers, am I right?) with the traditional opening of the things.

Many things were received, including, but not limited to: 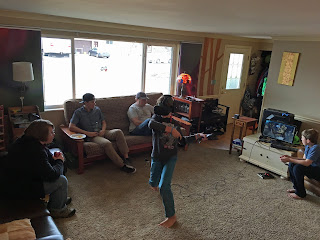 Skipping to the party, here you can see me swinging the controller around wildly. As an aside, how awesome you feel in VR is directly linked to how dorky you look. 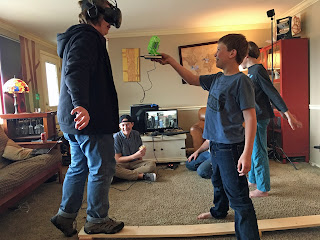 I couldn't leave all the VR to myself though, and so here is one of my friends playing a rather interesting game. As you can see, he is standing on a plank roughly 5 centimeters(Translation: 2 inches) above the ground. To his eyes however, the plank is suspended at the top of a skyscraper, deadly drop to either side. This is a great example of my vr awesomeness theorem, especially when he falls off. 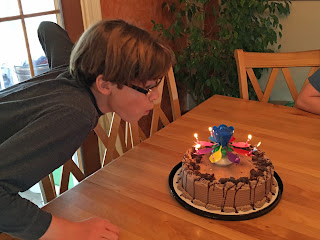 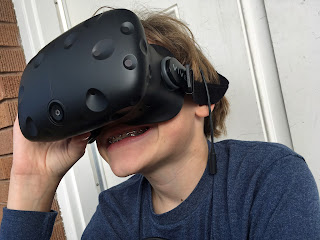 Lastly, another image of me looking into a darkened headset (You can even see it's unplugged! I fell to the dork side on this one)

[Editor's Note: I asked if we could take a birthday picture. I was told yes, as long as the VR helmet was included. I couldn't argue... it's his birthday and since I haven't seen him without the helmet for the last 24-48 hours it seemed only appropriate]
Posted by Jstar No comments: 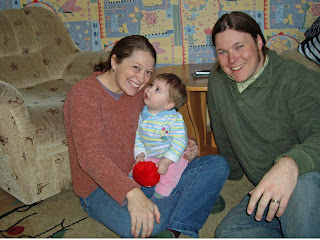 Eight years ago today, after
thirteen months of paperchase,
four weeks of daily orphanage visits,
and two days in court
a judge in Kazakhstan said,
"dah" and Alexandra Grace Morningstar became forever and always and officially a part of our family. 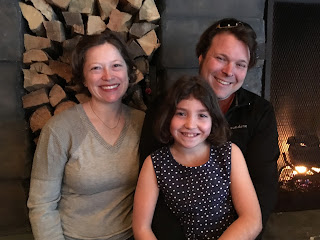 The wild ride continues with our spunky, zany, sassy girl and I can't imagine life any other way.

Sasha, I'm so very grateful that you are ours and we our yours!

This is WanYing's eighth birthday. I got a new camera that can print out pictures [Editor's note: watching kids' fascination with Polaroid photos is awesome]. When I woke up I had a bunch of balloons when I woke up in my room.

I got to have a Walk Around the Sun on my birthday. A Walk Around the Sun is where you get to tell something about each year and you can bring pictures in and you can bring a treat in for your class. [Editor's explanation: it's a Montessori tradition - you share a photo and story from each year (each trip around the sun - get it?) and the kids sing a cute little song while the birthday kid carries a globe in a circle around a candle. It's adorable]

I had a great day. 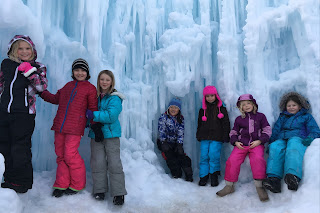 These are the friends I invited for my birthday party. This is a picture of all of us together. I chose to go to the Ice Castles because two years straight there's some problem to go to it then I got to go because we got all the stuff done and it wasn't too hot.

[Editor's explanation: Ying has wanted to have her party at the Ice Castles for several years. Two years ago it was too warm and they closed before her birthday. Last year I didn't realize we needed to get tickets ahead of time so they were all sold out. This year it finally all worked!] 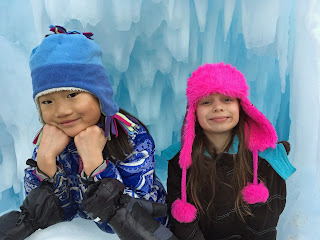 This is a picture of me and my friend. We were sitting together under a big pile of ice. 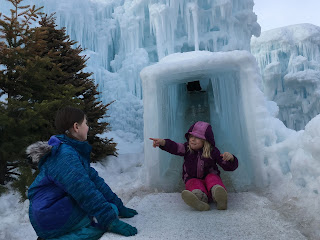 This is the ice castle slide. They made it out of ice and it was really slippery and you would like fall down it almost because it was so slippery. 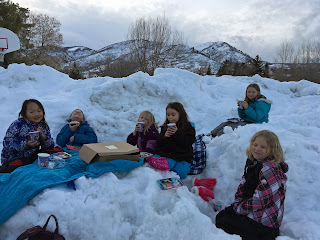 We got to pick up pies from a place that my mom knows and they were surprise pies so we didn't know what they were and one of them was a hand birthday one. And they had a creamy center. And we mostly everybody ate two.

[Editor's explanation: We ordered "hand pies" (think turnovers) from my friend's wife's pie shop in Heber - June Pie, check it out! We didn't know what flavor the hand pies would be, hence the "surprise pies" but the vanilla cream filling was a huge hit with the girls!] 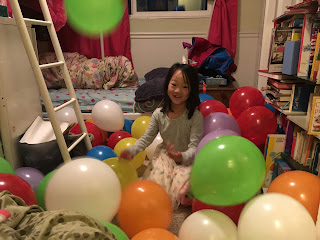 This is a picture of when I woke up in my bedroom. I played with the balloons for a bit and then I went downstairs. And I played with my sister and brother and we threw balloons at each other. And my brother blew up all the balloons 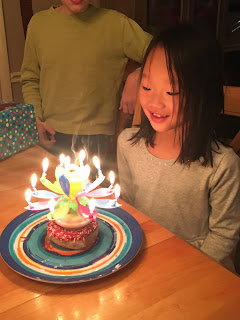 This is my birthday candle. It's one that sings and sings and sings. You have to cut the wire to make it stop singing. And it has a lot of flames on it so I had to take a few blows to blow it all out. And it's on top of a donut. 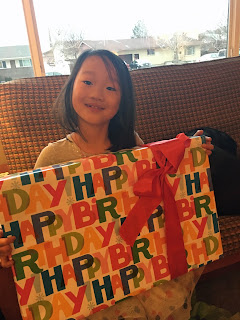 This is a present that I got from my gramma and my grandpa and it's actually what I wanted and it's a really cool set of Littlest Pet Shops. And I shaked it and it didn't make a noise.

I now love being eight! And I don't need a booster seat!
Posted by Jstar No comments: