Confession (which surprises no one): I am not good at sitting still. I have devoted considerable time and energy into finding contentment outside of checklists and have, through the grace of God, limited many of the negative effects of my natural striving, outcome-focused economy on my mind, body, and spirit. But even as I find increased joy in margin and space, the truth is that my hands just like to be busy!

Enter my new hobby: Knitting! Knitting is AMAZING. I get to make pretty things, learn new skills, create gifts, buy fun and good-feeling and ridiculously-expensive yarns, purchase accessories like yarn winders and neato knitting needle sets, follow patterns (I love following patterns), and have something to do when I travel or watch TV! Knitting just may be the perfect hobby. 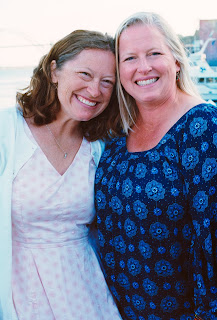 It all started this summer when we went on a multi-family camping trip to the Oregon Coast.

My fabulous friend Cindy has been knitting for years and I tasked her with buying me some starter yarn and needles and teaching me the basics. With infinite patience, she helped me create some practice squares and set me up with her favorite knitting book, Stitch 'n Bitch, and with an introduction like that what more could I need?

Then things got crazy.

See, another dear friend was giving birth to her third-born at the end of August. If it's true that I'm not good at sitting still, it's equally true that when I jump in, it's always with both feet - so I figured I should make a baby blanket! 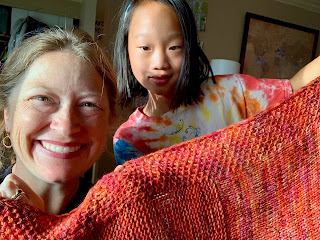 Note to all new knitters out there: when you decide to knit your first big project, and it's a gift for a specific occasion (e.g. birth of a child), begin more than two weeks before the event! But, I figured that the baby was unlikely to need a merino blanket in August anyway, so if I was little tardy the baby wasn't likely to mind - and into the project I plunged! 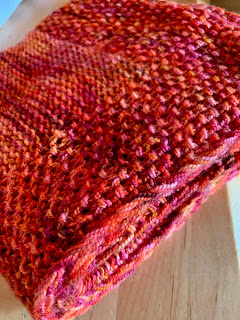 I was super happy with the finished product. It was far from perfect, but, hey, that's how you know it was hand made with care, right?!? And the wool was super soft and it should last long enough to be an heirloom.

At this point, I was hooked. But, after doing such a ginormous project it was time for something a little faster. Plus, I wanted to experiment with different patterns, and Christmas was coming so it was time to make gifts. All of those factors combined into my scarf-making craze! It turns out that scarves are basically the best thing to knit ever, especially for beginners. You can use really chunky yarn so they go fast and they're easy to give away because one size fits all! 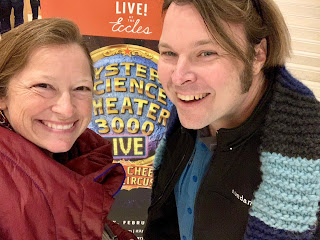 Steve got my first scarf attempt. I was a little dubious that he actually wanted it since, in our 21 years of marriage, I've never ever seen him wear a scarf. Plus, as my first attempt, it was a little wobbly. But he was very sweet and actually wore it a bunch of times this winter and said that he got a ton of compliments when he wore it up at the Sundance Film Fest while volunteering. So, I figure, if it was nice enough to get Film Fest compliments, I must have done pretty well. 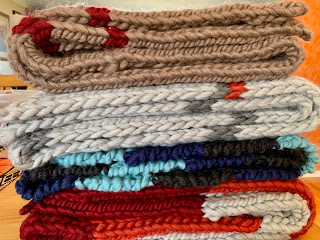 And thus began the scarf-knitting craze. I played with different colors and styles and stripes and it was a lot of fun. The yarn was hella expensive - it turns out that when you consistently buy chunky merino yarn from adorable little shops in Seattle, it's not cheap. But I figure that if I'm going to put this much time and attention and love into something, it might as well feel good! 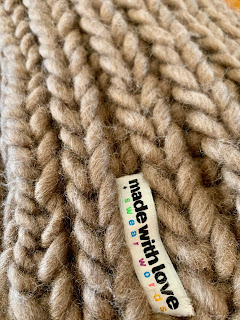 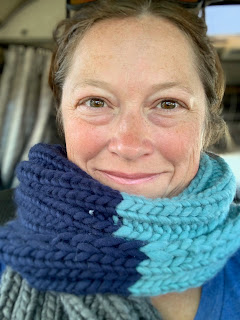 And once the Christmas-fest knitting frenzy was over, it was time to get back to my main project - a sweater!

Yes, I know I have issues. 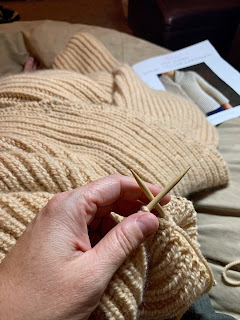 I had a blast knitting my sweater. It took me from November to March, with some weeks off for Christmas presents. And the pattern I chose was a fisherman's knit, which, in my ignorance, I thought would be fun - but little did I know that every row is actually knit into the one before it. This makes the knit super chunky and warm, but it means that the sweater basically takes twice as long because you have to knit each row twice. Well, live and learn.

The sweater is 100% merino wool and weighs just shy of three pounds (yes, I weighed it). It is basically the world's heaviest, warmest sweater and I love it! I always feel a little guilty if I wear another sweater, like I'm cheating on it. I guess when you spend that much time creating a thing, you forge a slightly disturbing bond with it.

Here are my sweater vanity shots - I'm particularly proud of the sleeve decreases; they look so darn cool. 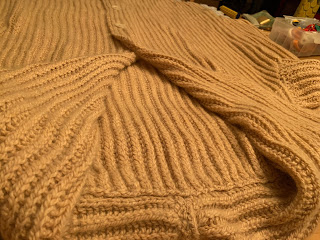 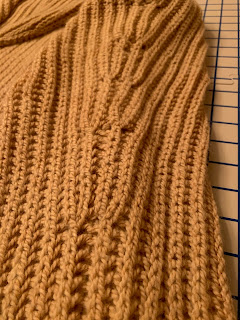 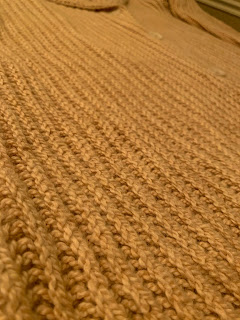 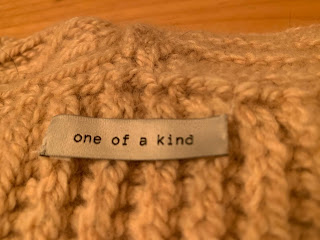 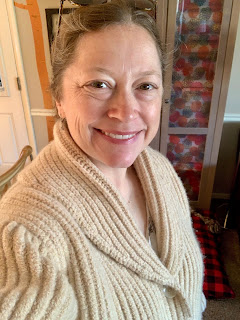 I also made my mom a wrap as a late Christmas present: 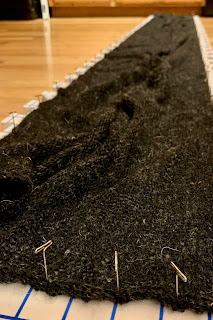 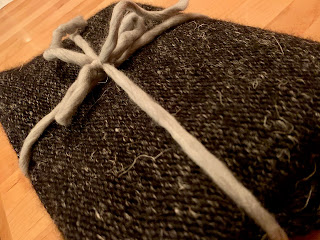 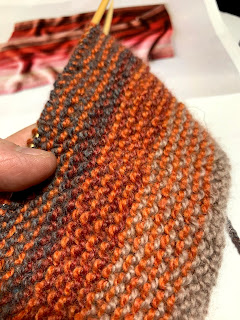 And now I'm making myself a fun striped wrap in preparation for sundress and evening summer concert season in faith that summer concerts will again be a thing!

So, there you have it, my new hobby-slash-obsession. In this time of Tiger King-watching sequestering, I'm happier than ever that I have something productive, beautiful, and comforting to keep my hands busy.

Now I gotta go knit and watch the next episode of Tiger King - those people are so marvelously, crazily entertaining!
Posted by Jstar No comments: Links to this post

The Hardest Working Member of our Household

Heaven knows we're all working harder these days in a lot of ways. We're working hard to share space, stay motivated, get healthy, eat well, adapt to change, care for each other, and not throttle the other members of our families while cooped up for waaaaaaaay longer than we ever thought possible.

Like so many other folks, there's a lot of good stuff happening around my home:

But hands down, there's one member of our family whose efforts far outstrip the rest of us, working tirelessly to keep us healthy and clean... 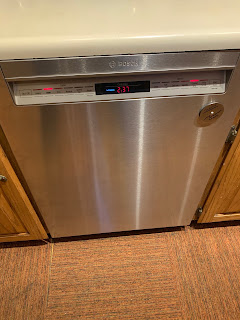 Thank you, trusty dishwasher! It is UNREAL how many dishes we go through with everybody home, eating at home, all the time. Seriously, we run a full load of dishes at least once a day. We are actually occasionally running out of forks in just one day's usage. It's astounding.

I have never been so grateful for my dishwasher.
Posted by Jstar No comments: Links to this post 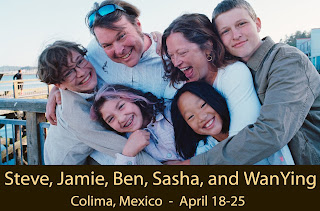 Over the past 8 years, the Hogar de Amor orphanage in Colima, Mexico has become a huge part of our lives and has captured our hearts. Every year, we lead a group of folks from our CenterPoint Church family down to Colima to encourage, support, and be loved on by the kids and caregivers of Hogar de Amor. Our brothers and sisters in Colima truly are our family.

This year, we are unable to take our scheduled trip in April because of the border closings - and we are gutted. It's incomprehensible to us that we won't be spending April in Mexico, and we are mourning missing this trip as a family.

But regardless of whether we can travel to Mexico, the need at Hogar de Amor continues! Will you join us in supporting the orphanage's needs? You can donate online at https://centerpointutah.org/giving (select Mexico Mission Trip as the fund) or make checks out to CenterPoint Church with a memo of "Mexico trip" and mail them to us. Or if Venmo or Paypal are easier for you, just email or text us and we're happy to send your donation down to Mexico.

And above all, please pray for Hogar de Amor. Pray for the kids' health and safety and continued emotional growth even in a tough time. Pray for the caregivers and volunteers at Hogar de Amor as they now need to provide schooling on-site in addition to all of their other responsibilities. Pray that each person at Hogar de Amor would feel God's love, every day. 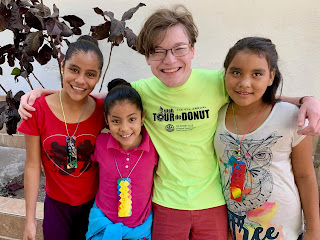 Every year, we put together a letter as a family explaining how much Hogar de Amor means to us and sharing our heart for Colima with family and friends.

This year, we asked the girls if they wanted to share a little about their experiences in Mexico and I was blown away by what they shared: 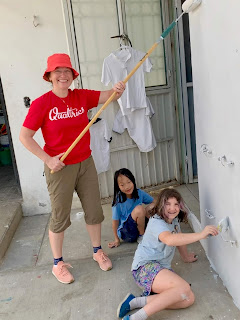 My name is Sasha. I have gone to Hogar de Amor about three years. This will be my fourth. I enjoy it all because I learn some really important lessons about poverty and what it means to “Help”. When I go there I feel like I'm doing something really great and important in my life and make a big change in the world. I feel like when I grow up that I will lead a mission trip to make orphanages and kids a great place to be. This is very important to me in my life and I feel like we should all put some kind of help into this mission trip for the children and their families, caregivers, friends, and everyone in this world. 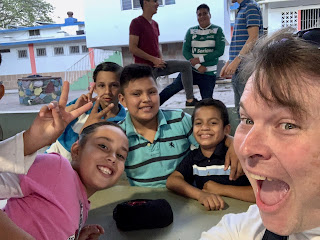 The Hogar De Amor orphanage is full of kids with either family problems or have no relatives. We go there to help the kids go through some hard times and help the orphanage. We like to go there to have fun with the kids and to have a great time with them. We go there every year to have fun. Some great things about this trip is that we get to make great relationships with the kids. We go there to make a difference in the world and help people in need. If you can’t go with us and you still want to be part of our team we would love donations for the trip. All of the donations will go to fund activities and supplies for the trip and for the orphanage. Last year we were able to save enough money to help build the new adolescent’s boy home which is so beautiful and they love it. The donations each year make a great impact and the orphanage gets better every year. 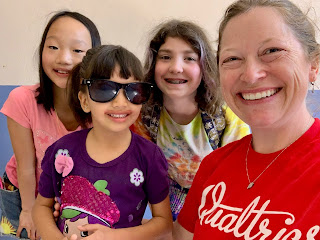 My name is WanYing, I have been going on the Mexico Mission trip for a few years and it’s so cool to see all the kids and how happy they are to see us when we come. It’s a nice little break for the caregivers, too, because when we go down we hang out and do crafts and activities with the kids and that means the caregivers can take a rest when we’re doing those things.

One of the things that’s cool about going is you can make some friends or buddies and if you go again they’ll remember you and want to hang out again. 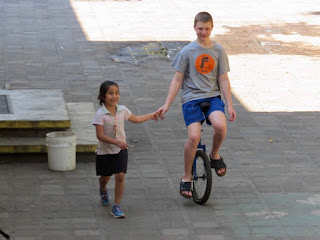 Truly, Hogar de Amor has become part of our family’s identity and mission over the past 8 years as we have traveled annually to Colima, Mexico. As a family, we are proud and grateful to support Hogar de Amor Orphanage with our time, prayer, and finances year-round.

We invite you to join us in support of the orphanage financially. If you choose to donate, your entire donation will go to Hogar de Amor. Thanks for being an important part of our support team.  We are grateful for your prayers and enthusiasm for our family, and for the kids and caregivers of Hogar de Amor!
Posted by Jstar No comments: Links to this post