Hello my name Sasha and i will be talking about the Kazapalooza trip. The Kazapalooza trip is where every year people from Kazakhstan meet up with each other and hang out. they also get to know each other better each year. they have been doing this for over ten years and this year was our first year going. We don't usually go because its usually on the west coast near Maryland, But this year it was in New Mexico it was only a two hour plane ride from Utah so that's how we got to go Kazapalooza.

Before we left to Kazapalooza there were a couple things i was looking forward to for when we went. One was that I would know that  wasn't the only one adopted from Kazakhstan. That I would make some  new friends I could hang out with. also that I would have a ton of fun being there with my family. It all came true after the Kazapalooza trip and even more happened then I was hoping for, it was so fun. 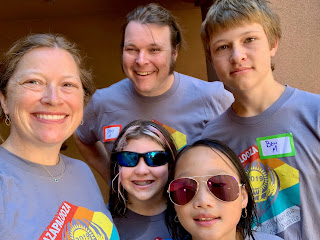 This was a picture of my family on the porch of our Hotel Room wearing our Kazapalooza shirts for the year so people could recognize they group of Kazapalooza  people in the day. 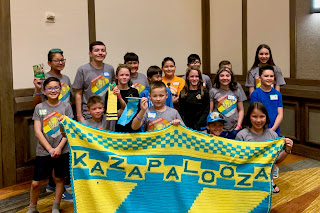 This picture is with me and all the other kids that were born in Kazapalooza [editor's note: she means Karaganda, the city her baby house was in] with a blanket that was knitted for the bidding they have each and every year and the age of kids is 2 to 18 of people who were adopted from Kazakhstan in all the city's not just Karaganda. 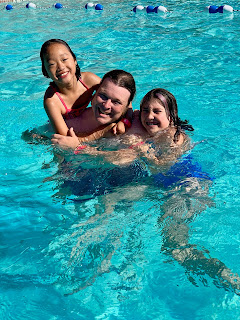 This is a picture of me my dad and my sister all swimming in the hotel pool which had a water slide and a deep pool that you could do tricks in. the pool was like 100 steps from our hotel room and me  and my sister both went into the pool every day. 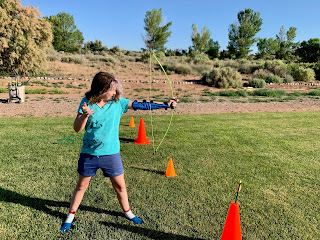 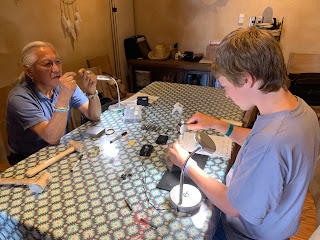 This picture is a class my brother took it was basically making rings and necklaces and bracelets out of metal and making a design on it. my brother enjoyed the class because he was trying something new. 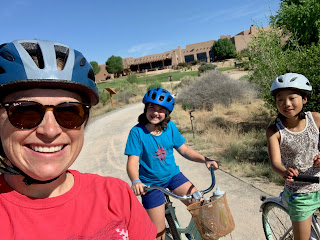 This picture is of me and my mom and sister renting bikes and going on a nice bike ride in the forest behind the hotel. 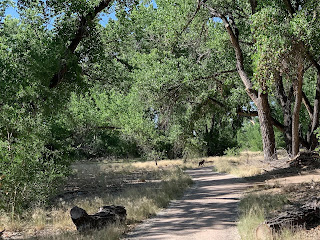 This is a coyote that crossed the path why we were biking on the path it was so cool to see a baby coyote in new Mexico. 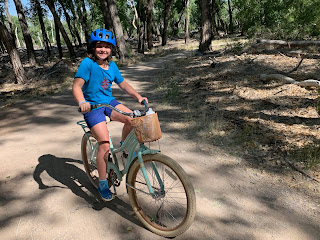 this is me on my rental bike turning a corner it was nice and shady so fun to bike in a nice forest. 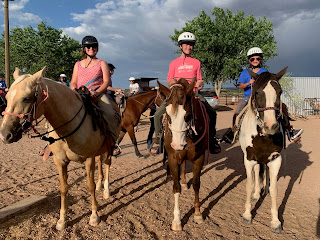 this is a picture of my mom and siblings doing a horse back riding lesson even though i wasn't there it was cool to know that they had fun together. 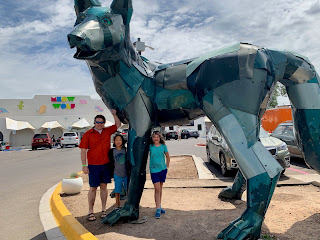 This is my next favorite part to talk about it this picture of me my dad and sister in front of meow wolf which inside looks like a normal house but when you  open something like a refrigerator it has a secret passage way which leads into a alternate universe. 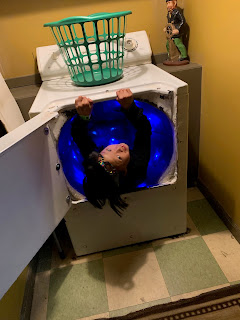 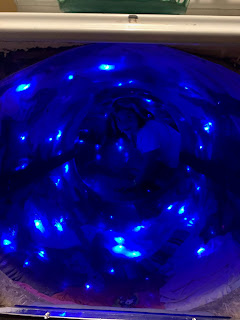 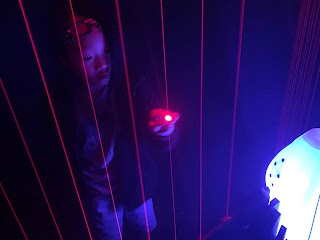 this picture is of my sister playing the laser harp which is basically when you put your hand through the laser it made  music not like a normal harp would it was super cool.

those pictures that you just saw were the most fun things that happened while we were in new Mexico while we were at Kazapalooza. All of the activities we did were so fun me and my whole family had so much fun. That is why hopefully we can go to Kazapalooza next year and if we can it will be a super fantastic fun trip no matter what.
Posted by Jstar 1 comment: Links to this post 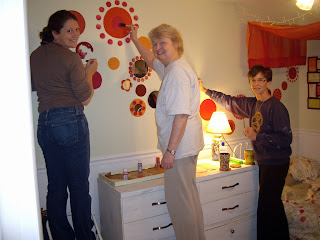 The nightmare of any home renovation set aside, it was a bittersweet experience painting over our sweet little-girl decorations. Dreaming of our little girl's room decorations with my moms during the long, slow wait for Sasha is a memory that will always be with me.

The circles are gone and it's a boy's room once more! But we'll always have the adorable toddler photos to remember it by! 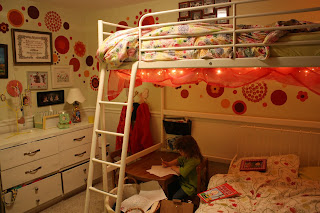 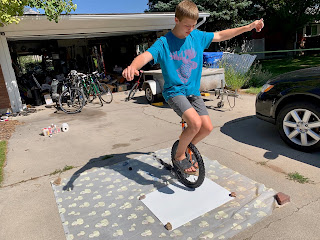 Unsurprisingly, Ben's tastes tend toward the austere. His goals in the room redo were: 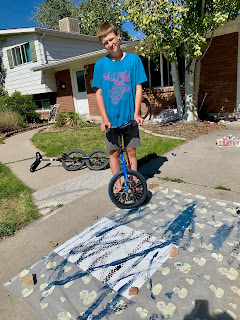 In honor of the rather obvious theme, we decided to also go with unicycle decorations. Our friend had the fun idea of painting Ben's tires and letting him ride over the canvas to make his own art. We all thought it was a great concept.

We also purchased some drawings for very imaginative and impractical unicycle patents from the 1800s for his walls, which turned out great. 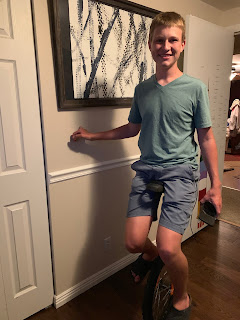 Ben's art, framed and hung high enough that he can still use the wall for support while (you guessed it) unicycling.


We're thrilled with how the room turned out and even happier that our year of remodeling is complete! A bathroom and two bedrooms' worth of remodeling and redoing is more than enough for one year!
Posted by Jstar No comments: Links to this post

We try to learn from past mistakes. Really, we do. But after only just recovering from the dreaded bathroom remodel, we signed up for another round of punishment. The summer of renovations continues!

With Sam headed to college, we decided it was time to swap the girls to the bigger bedroom. Which meant new floor, walls, and furniture in the two upstairs bedrooms and moving Sam's stuff downstairs. 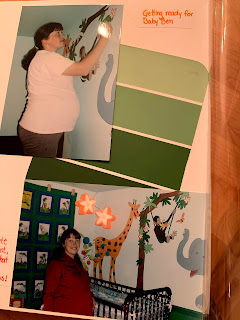 The boys are pretty flexible and undemanding in their room decor. I mean, they've been living with Curious George on their walls for 16 years. And don't think I didn't ask if they wanted an "updated" (read: non-toddler) theme over the years. They just didn't care enough to put up with the pain of repainting. They were proven wise, because the length and chaos of this room swap stretched even their easygoing attitudes. 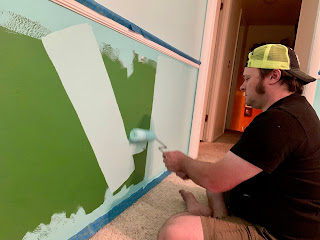 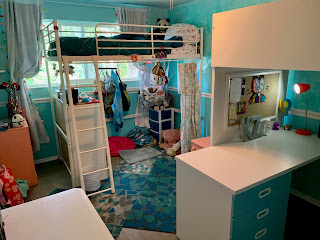 And just like that (except that the entire project took 2 months), it's done! We're all really happy with the results. It's fun, fresh, and so far the girls have succeeded in keeping it clean. WanYing got her wish of getting her own hidey hole.  Sasha got a desk and cubbies under her new bed, so both girls ended up with more personal space to call their own. 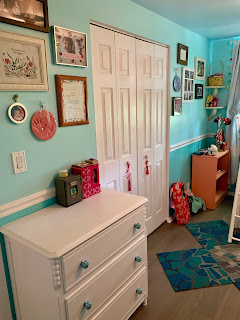 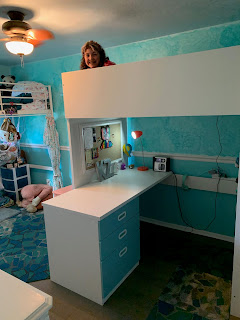 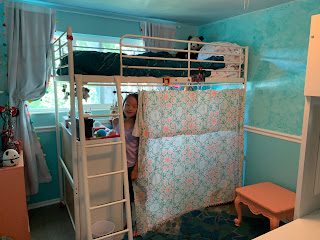 It was so. much. work. We're thrilled with the results, love the new hardwood, and looking forward to another 16 years before any more home remodels ;)
Posted by Jstar No comments: Links to this post