Pray for us. Please.

The awesome news - we are going back to the Hogar de Amor orphanage! Wahoo! 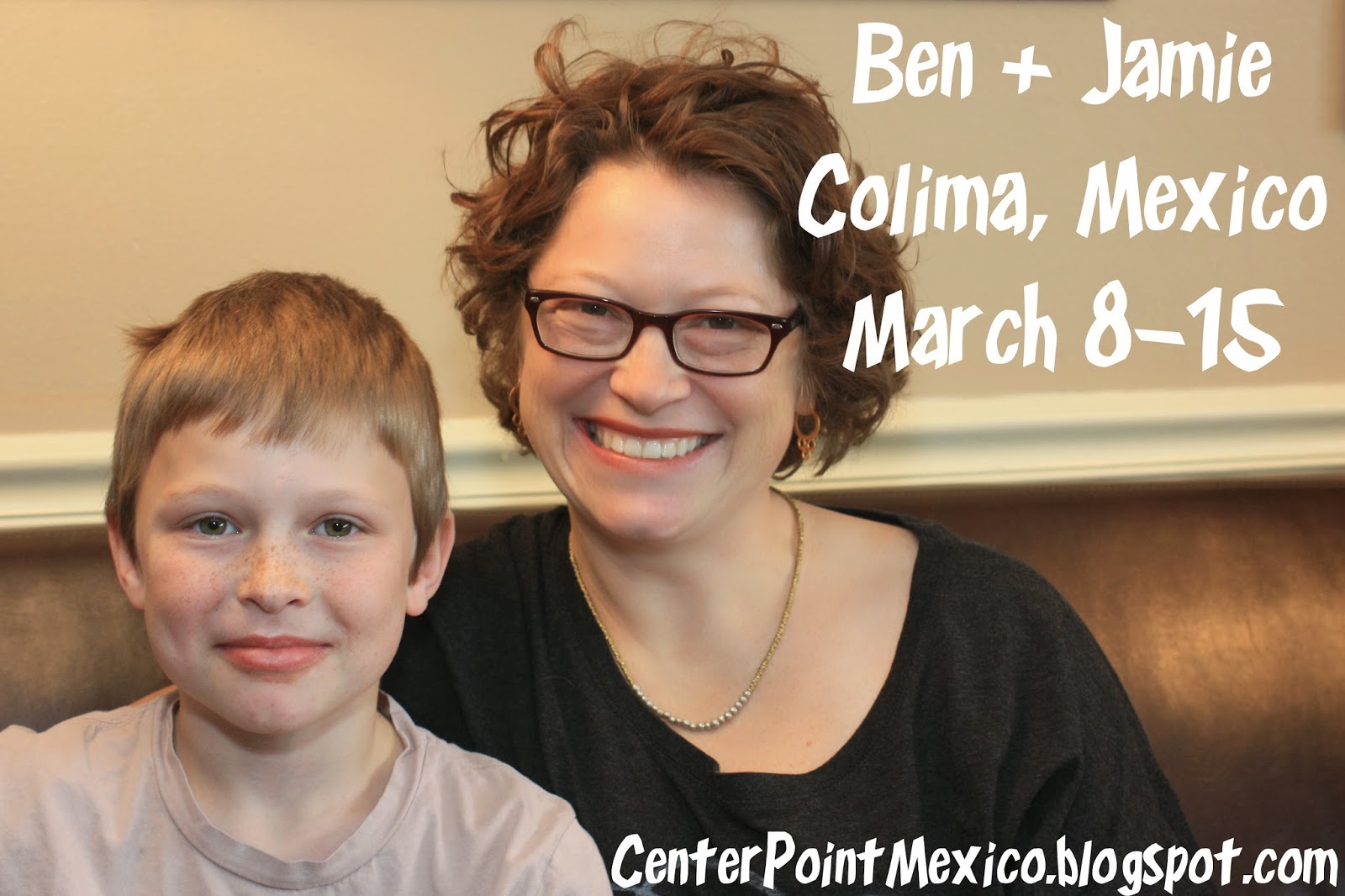 Ben and I are so excited to go back to Colima, Mexico and serve the kids and caregivers of Hogar de Amor.  This year we're taking a group of 10 from our home church, CenterPoint Church, down for a week of service in Mexico. We leave March 8th and we need your prayers!  Please pray for trip logistics, for great attitudes, for the group to be cohesive and positive, and for God to do truly good work in us and through us while we're in Mexico.

If you would also like to support the trip or the orphanage financially, our team blog at CenterPointMexico.blogspot.com has lots of ideas for how you can help! You can also subscribe to the blog to get photos, prayer requests, and updates emailed to you.

The not-so-awesome news -  we (Ben) narrowly survived the horror of taking support photos. We thought you might enjoy some of the outtakes as a reminder of just how much prayer we need :) 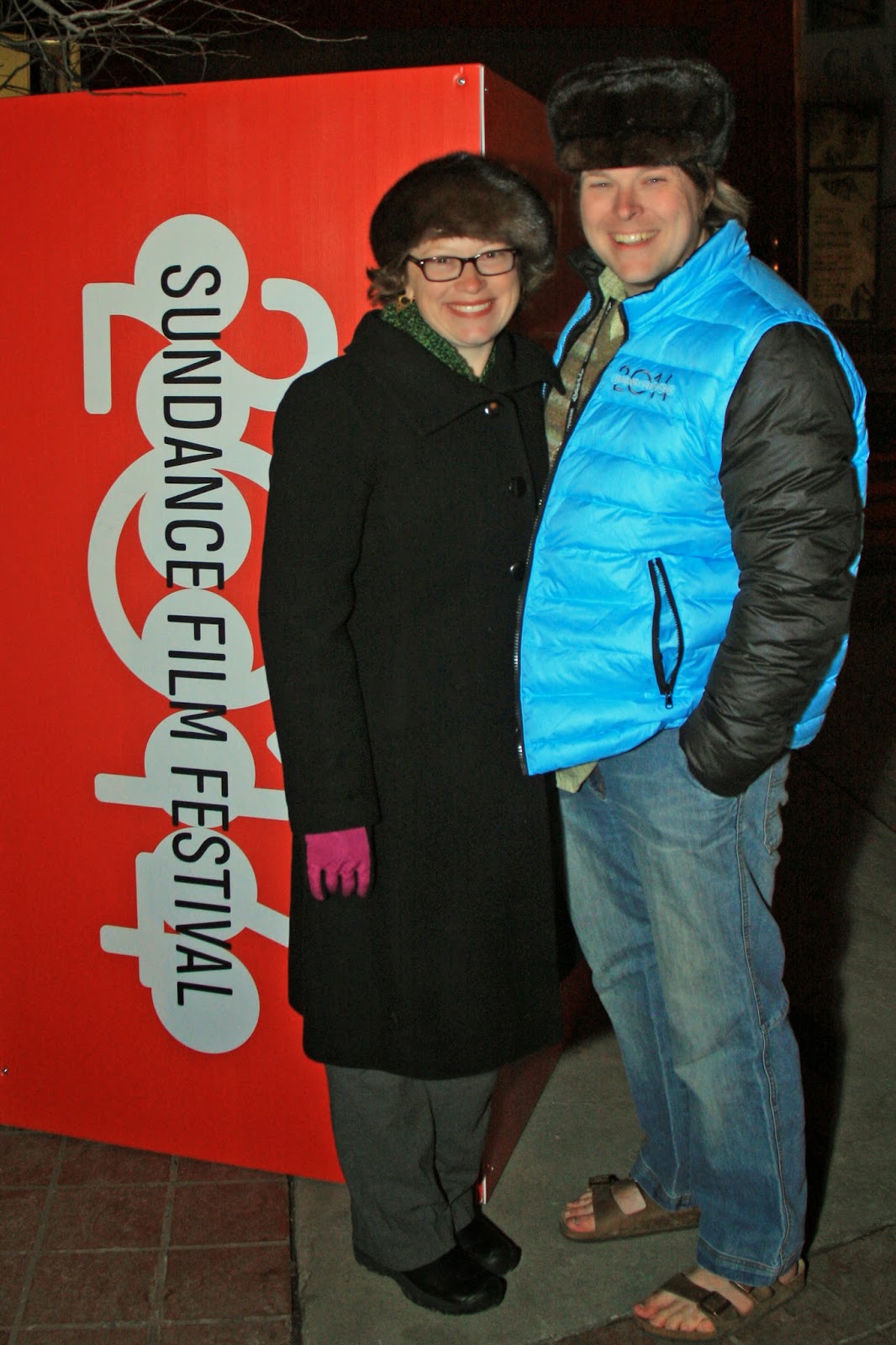 We survived Film Fest 14!  This year's film fest was an entirely different experience for us as we experienced it from the inside as volunteers.  Or, rather, as volunteer and volunteer widow.

This fall Steve had the epiphany that his experience in the Sundance Resort IT department might be very helpful to the Festival IT crew. Judging from the big smiles and warm hellos from fellow volunteers that greeted us everywhere we went, I think that Steve was quite the IT hero.

I won't lie to you, having Steve work 7 days a week between the resort and his work in Park City was crazy and stressful.  But Steve had a great time, made good connections, and got to make a Utah cultural event happen.  So, yeah, it was worth it. 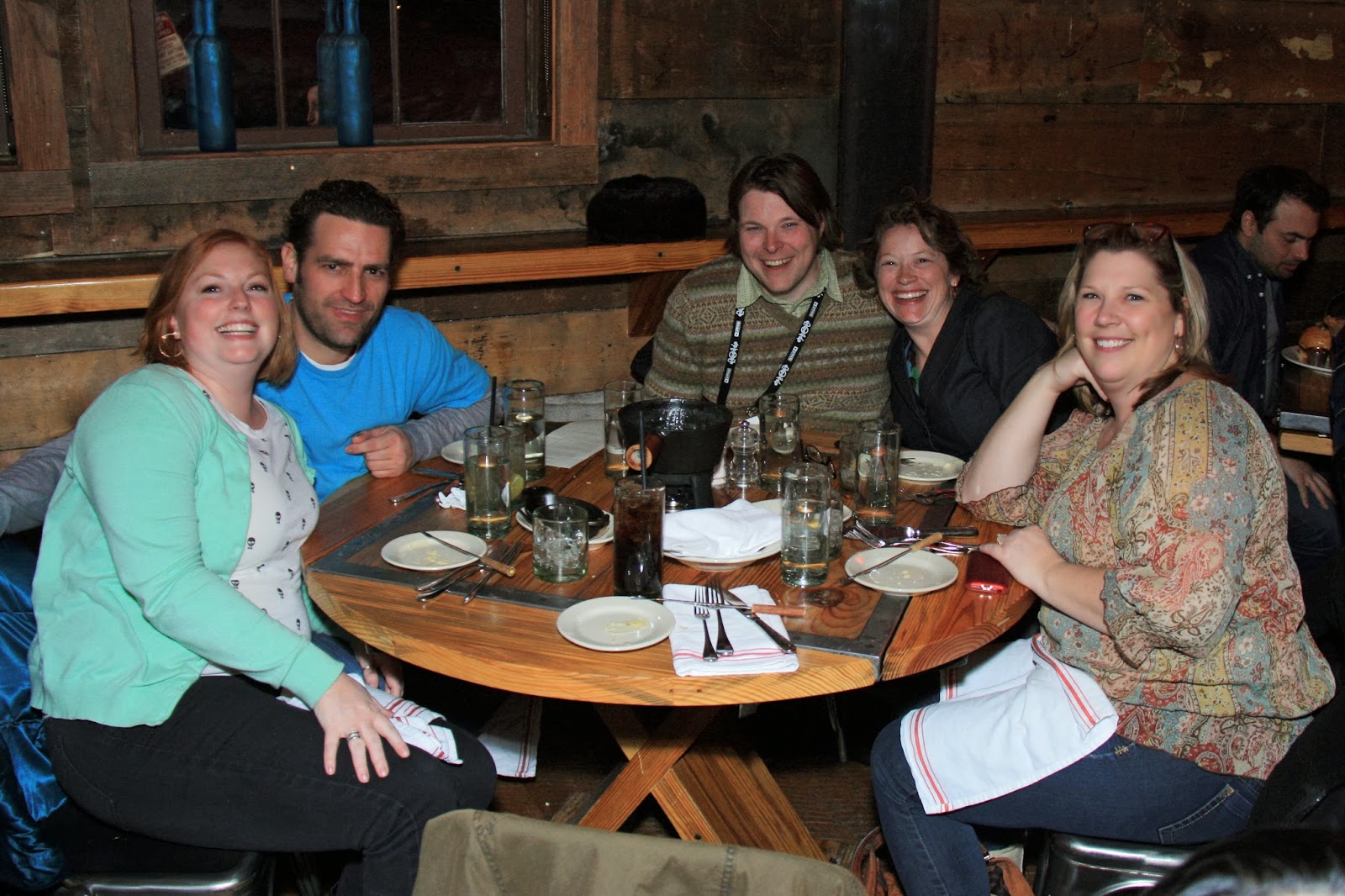 And, of course, we still made time to hang out with friends and catch some flicks.  This year we saw 1 documentary, 2 US dramas, and 1 foreign drama; a nice mix.  Here's the roster: Alive Inside, Frank, The Lock Charmer, Hits. David Cross, giant false-head wearing rock band singers, clairvoyant Argentine locksmith, and dementia patients - we got it all! 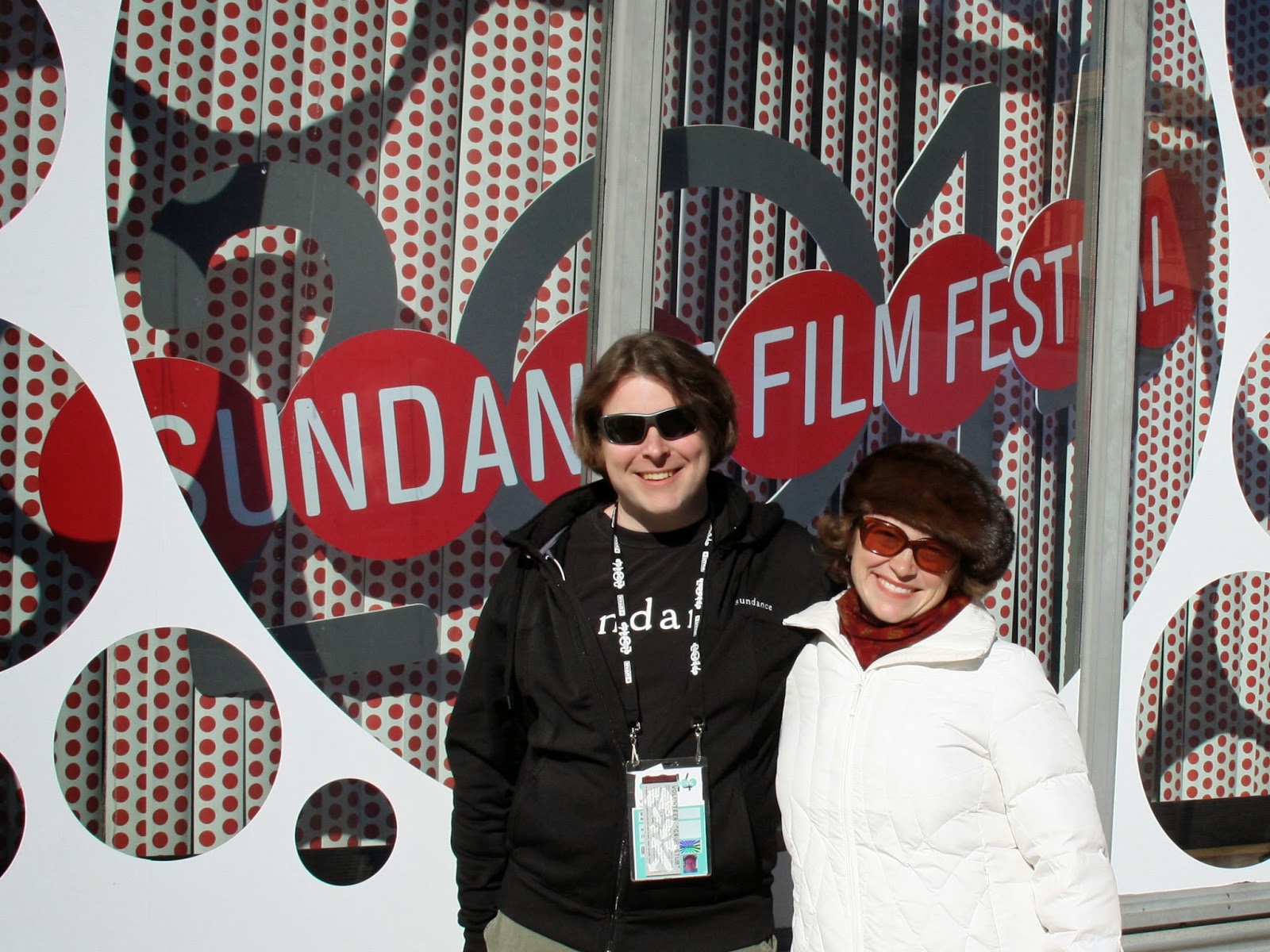 And, of course, we looked good doing it :)
Posted by Jstar No comments:

Long-time followers of the Morningstar Happenings know that the ever-fabulous Miss WanYing was born with Amniotic Banding Syndrome (ABS) causing limb differences in both hands and her right foot.  The good doctors at Shriners Hospital were able to use their skills to loosen the fingers of her right hand, leaving her with some shorter fingers and a very short thumb on her right hand.

WanYing has learned to make her hands work for her and it's unusual for her to need any help in coping with her unique digits.  She can do up buttons and zippers, use forks and pencils, climb ladders, even hang on monkey bar rings.

But now that WanYing is getting big enough to ski on her own, pole grips have become an issue.  I mean, poles are a big enough challenge for your average almost-five year old, but combining the normal learning curve with a shorter finger and thumb was leaving our girl frustrated. 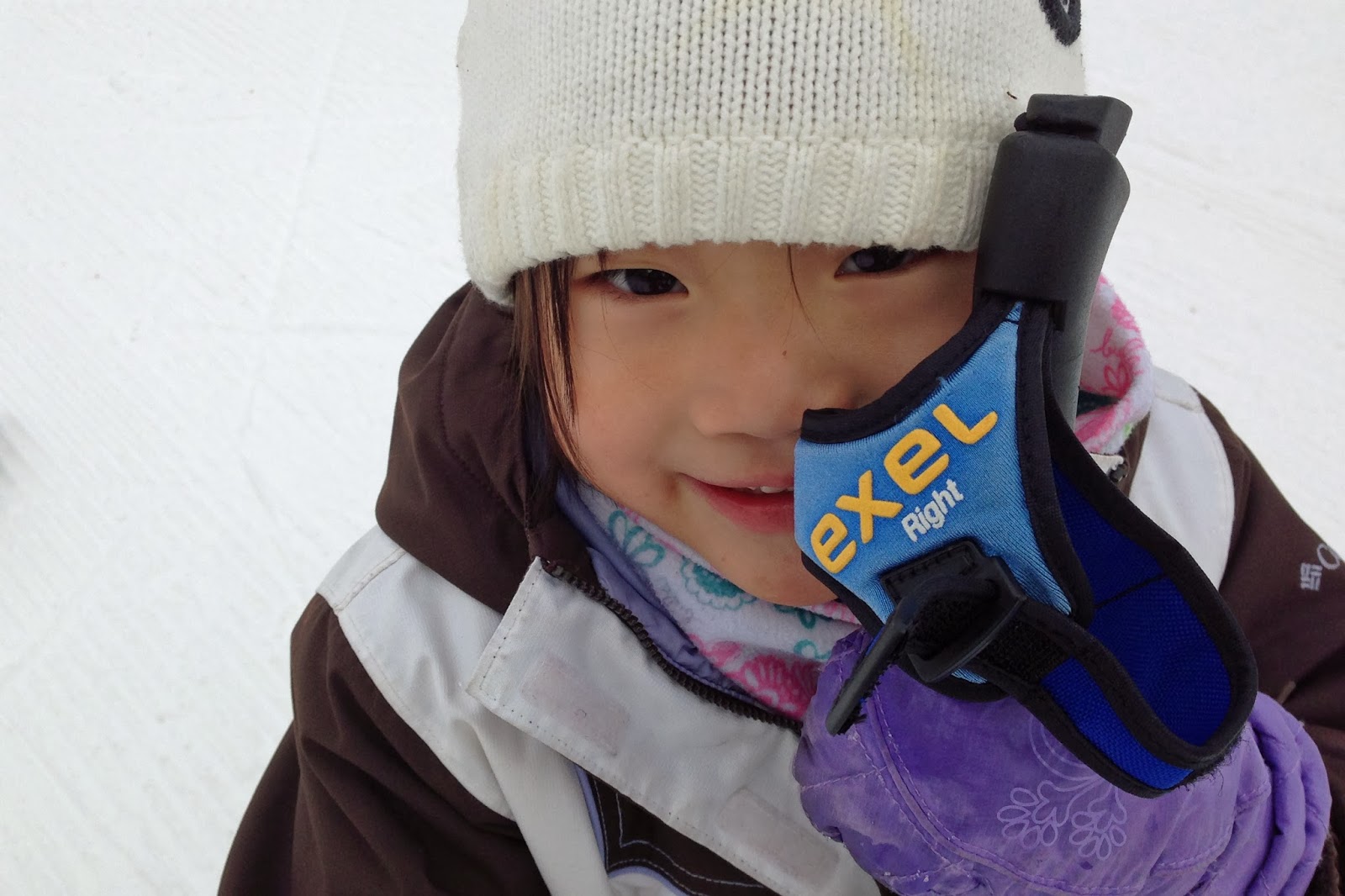 Enter the good folks at the Sundance Nordic Center!

We were up at the Nordic Center a few weeks ago with some friends and one of their kids had a broken finger. Instead of equipping him with regular grips that require the user to grasp with thumb and fingers, always-awesome Cami set him up with skate grips that Velcroed around his cast. And as soon as I saw that, my eyes got very wide and very excited - I had never considered using skate grips with WanYing! 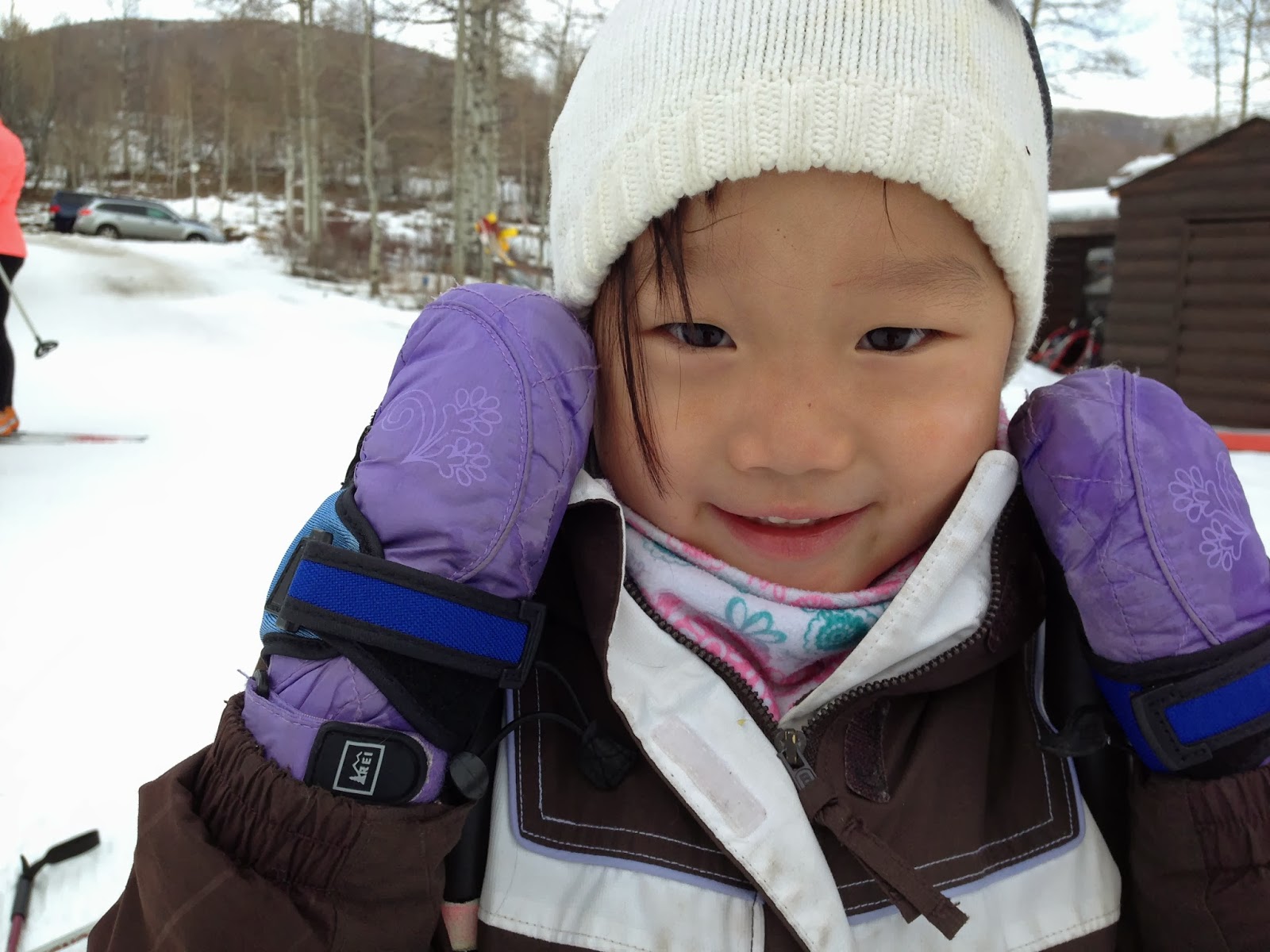 We chatted with the Nordic center folks about our options and Sam and Cami, the Nordic Center saints, scoured their supplies to find grips that were small enough for WanYing.  They mounted the grips to their smallest set of poles and, voila! perfect, custom-made WanYing poles! 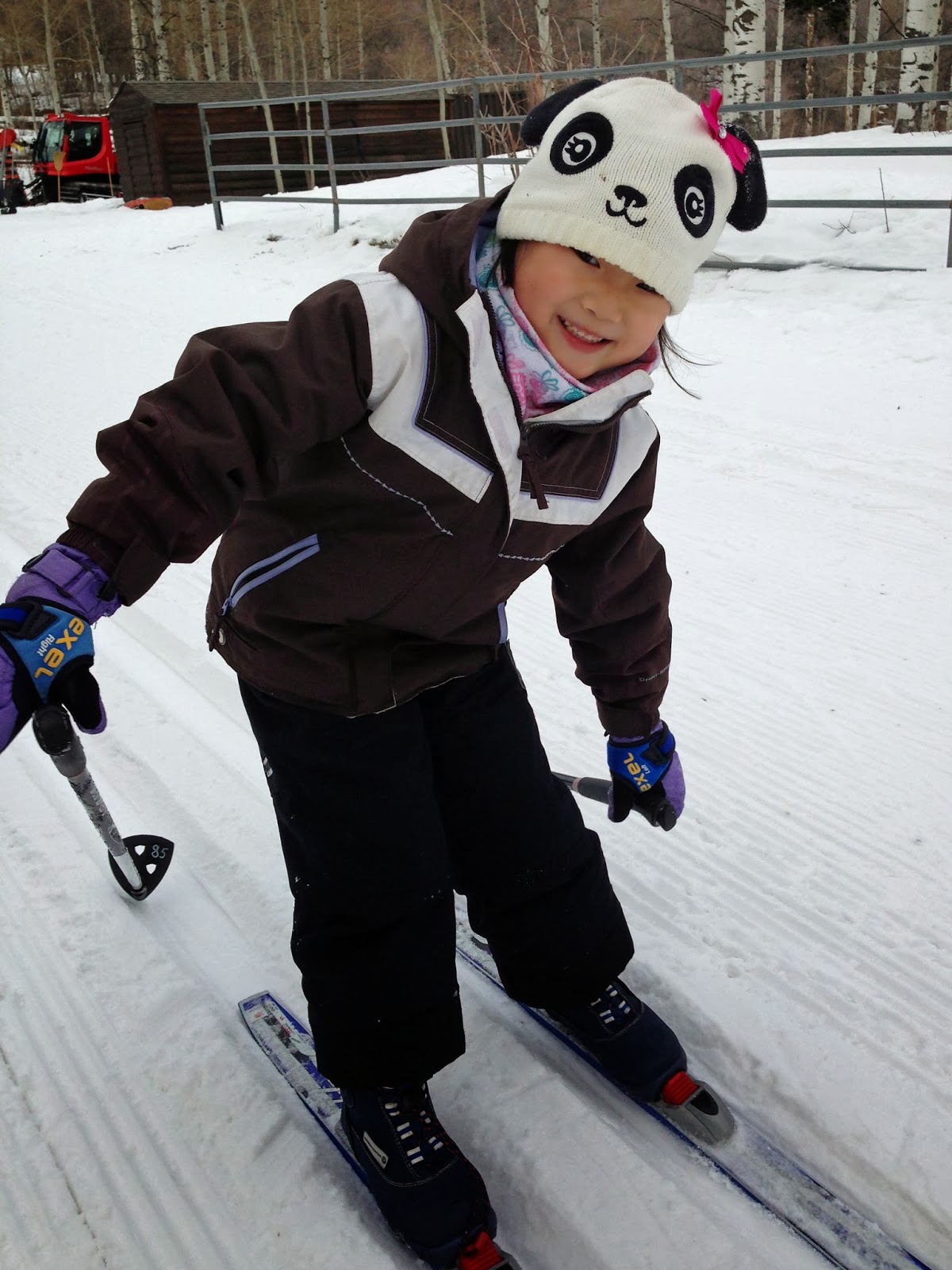 Big thanks to the fab folks at the Sundance Nordic Center for finding a creative solution for WanYing's adaptive cross country needs! Today, learning how to use poles, tomorrow Olympic biathlon!  Or, at the least, many years of fun family outings. 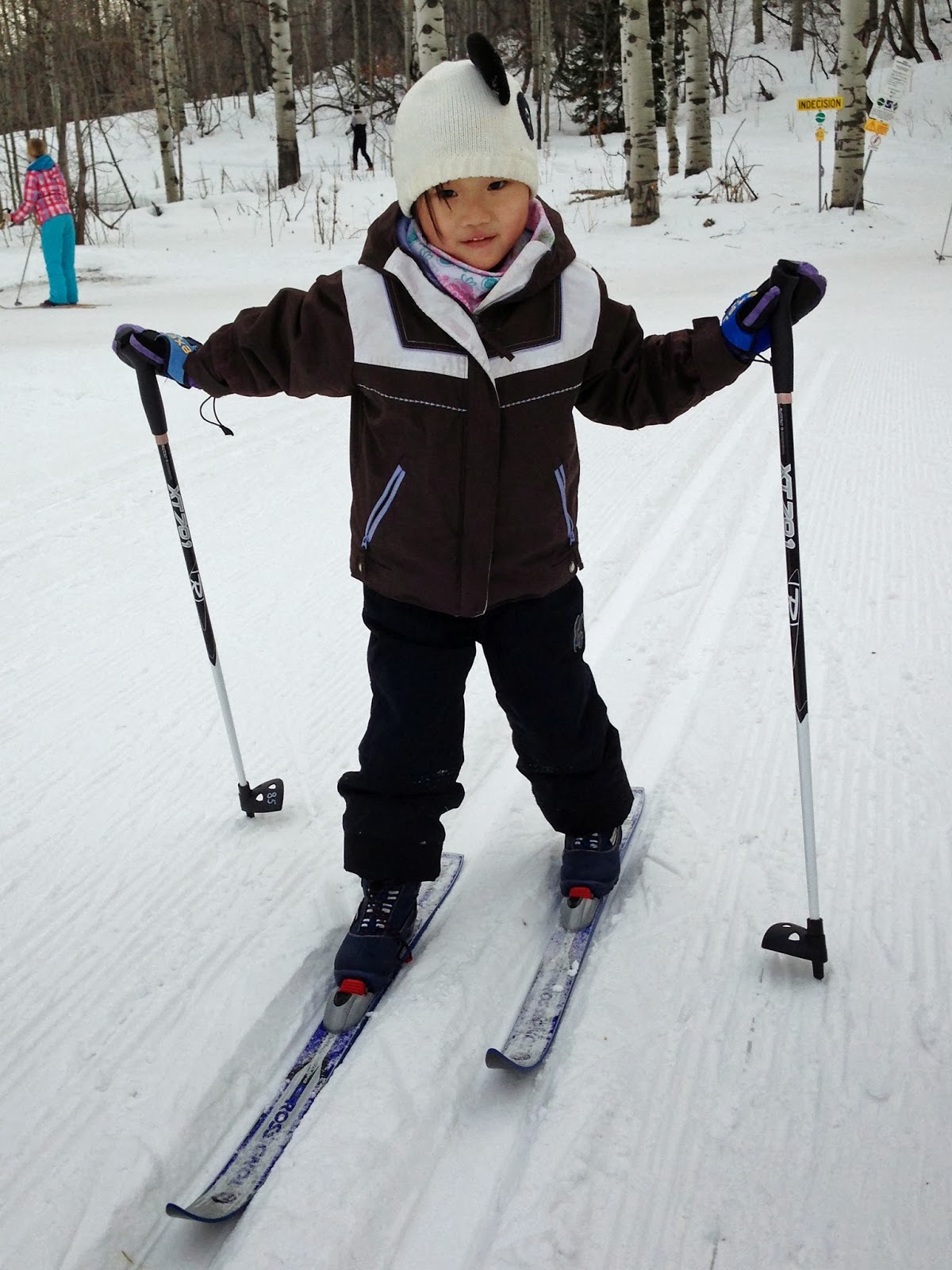 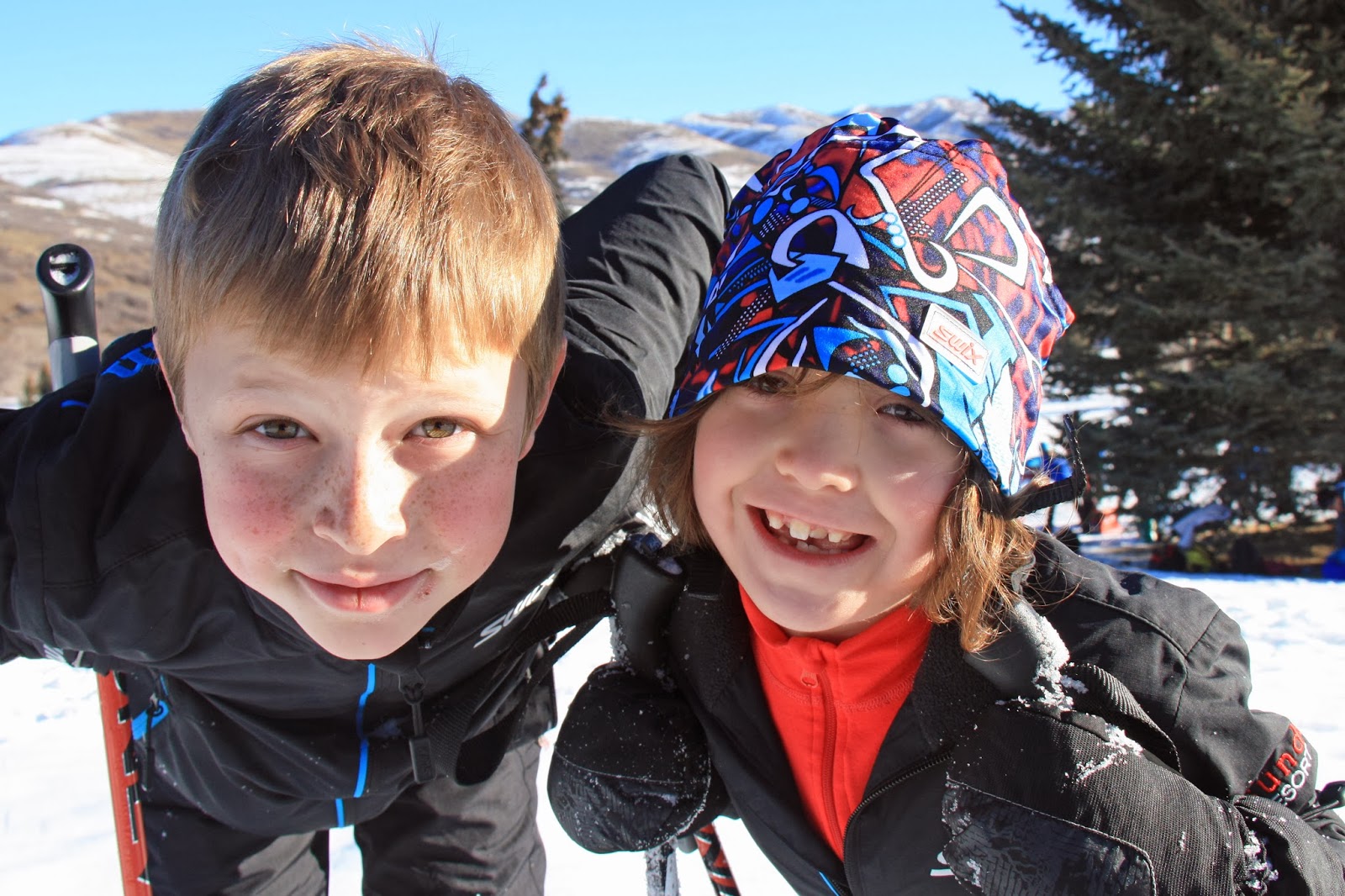 Maps reviewed so that kids don't get lost on the course and end 10 minutes after the last kid (not that this has happened...)?  Check!

Snow?  Check minus but at least enough to glide on.

Donuts purchased to that kids have added incentive to get out of bed at 7 on a Saturday morning?  Check check!

Must be time for a Nordic ski race! 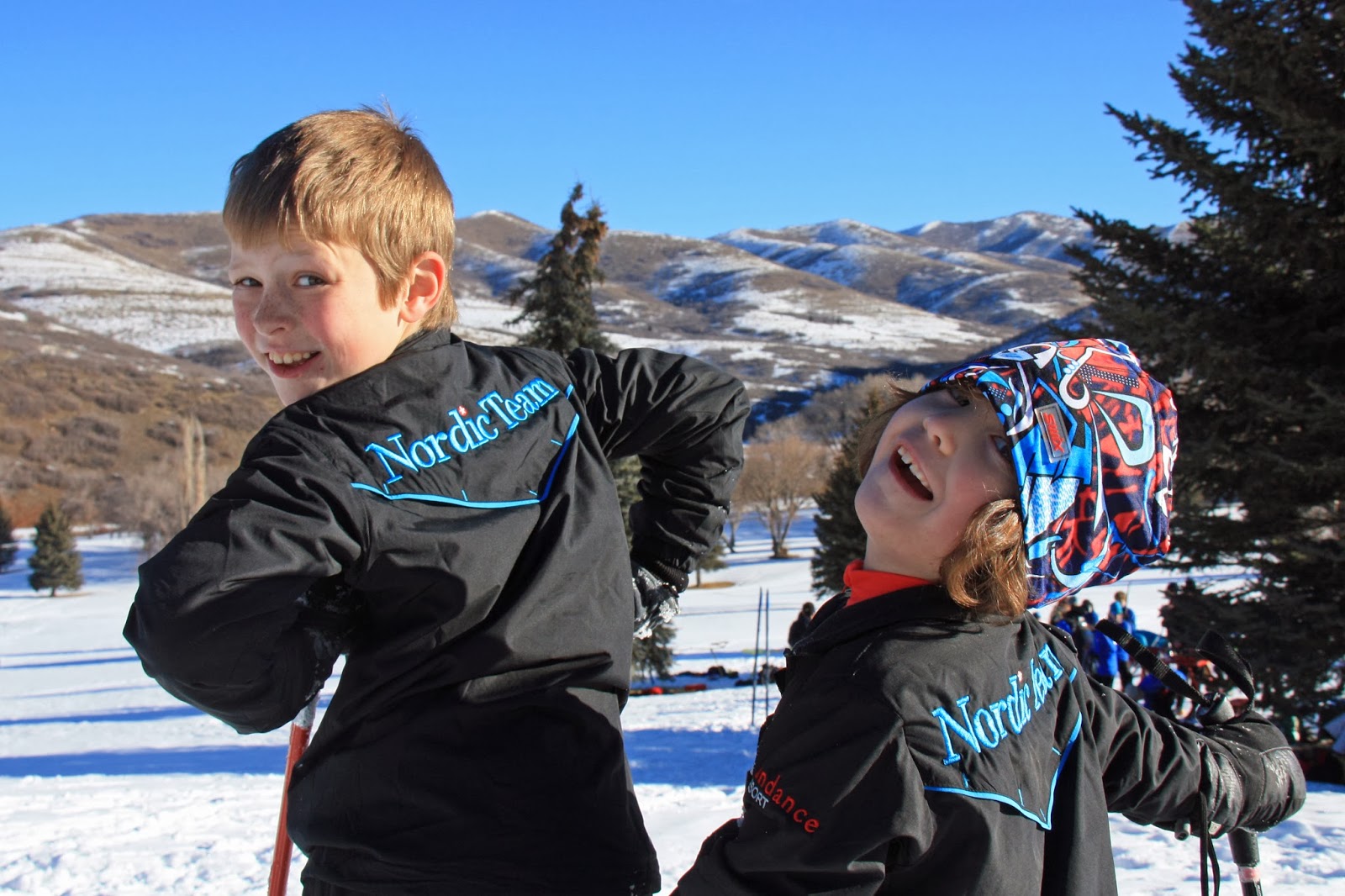 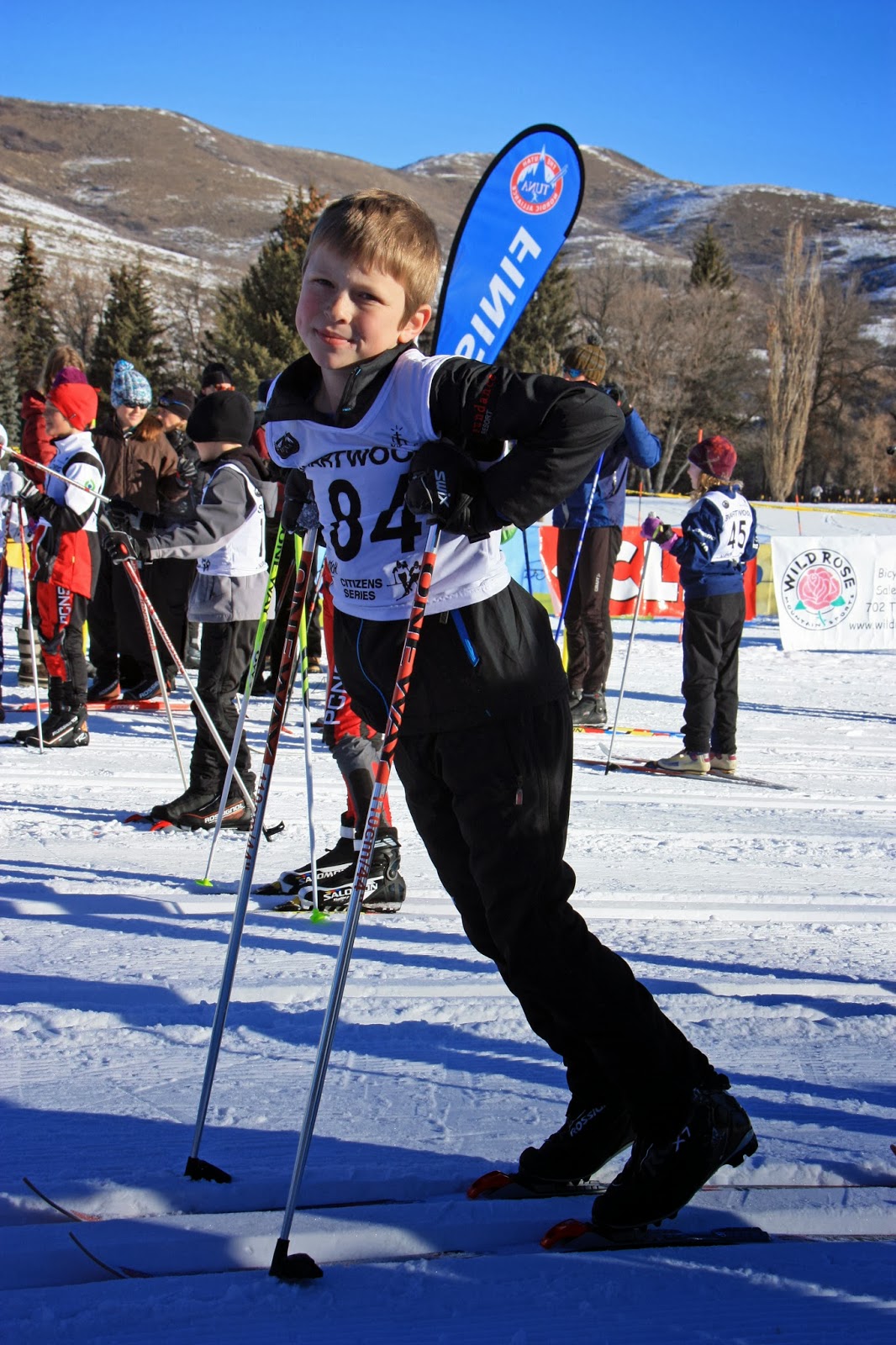 Here's Ben all ready to go at the start.  Before the race we reviewed the rules - this was a classic race, which means that all of the racers have to kick and glide, no skating allowed.  Here's how it went down when I explained this to Ben:

Ben: (puzzled look) Ok, I'll only skate when I'm going up the hills.
Mom: No, it's a classic race, there's no skating allowed.  If there's a steep hill you can herring bone, but no skating.
Ben: (even more puzzled look because clearly Mom doesn't understand that the whole point of a race is to go as fast as possible) But.  Mom.  It's faster.
Mom:  Yes, you're right.  I like the way you're thinking.  But skating just isn't allowed.
Ben: (clearly almost overwhelmed by the idiocy of this conversation) 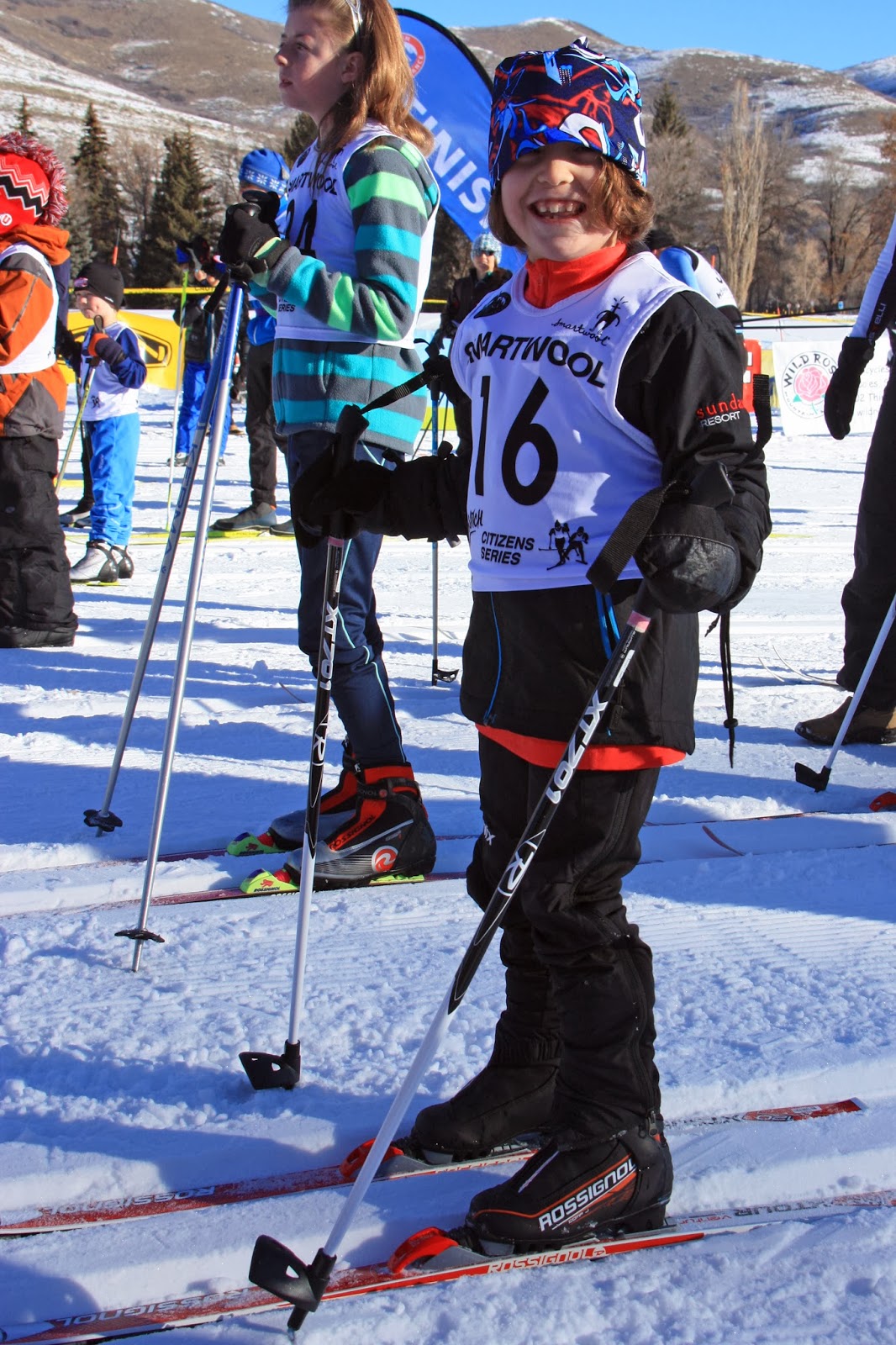 Saturday's race was an especially exciting one for our family because it was Sasha's first cross country ski race! In the past we've "encouraged" (read: forced) her to do the obstacle course, which hasn't really been a problem since they give out candy at the end, but now that she's in her second year of race team she really wanted to try racing on her own. So we told her that if she could make it to the meadow and back at Sundance she could do the 1K loop at this week's race.  She met the challenge with aplomb so the girl got to wear a race bib (and with style!) and compete in her first proper race.

Clearly she was thrilled and feeling very snazzy in her uniform, bib, and eye-shielding hat (we joke that she wears the hat over her eyes so she isn't distracted by any of the other kids - ski your own race!). 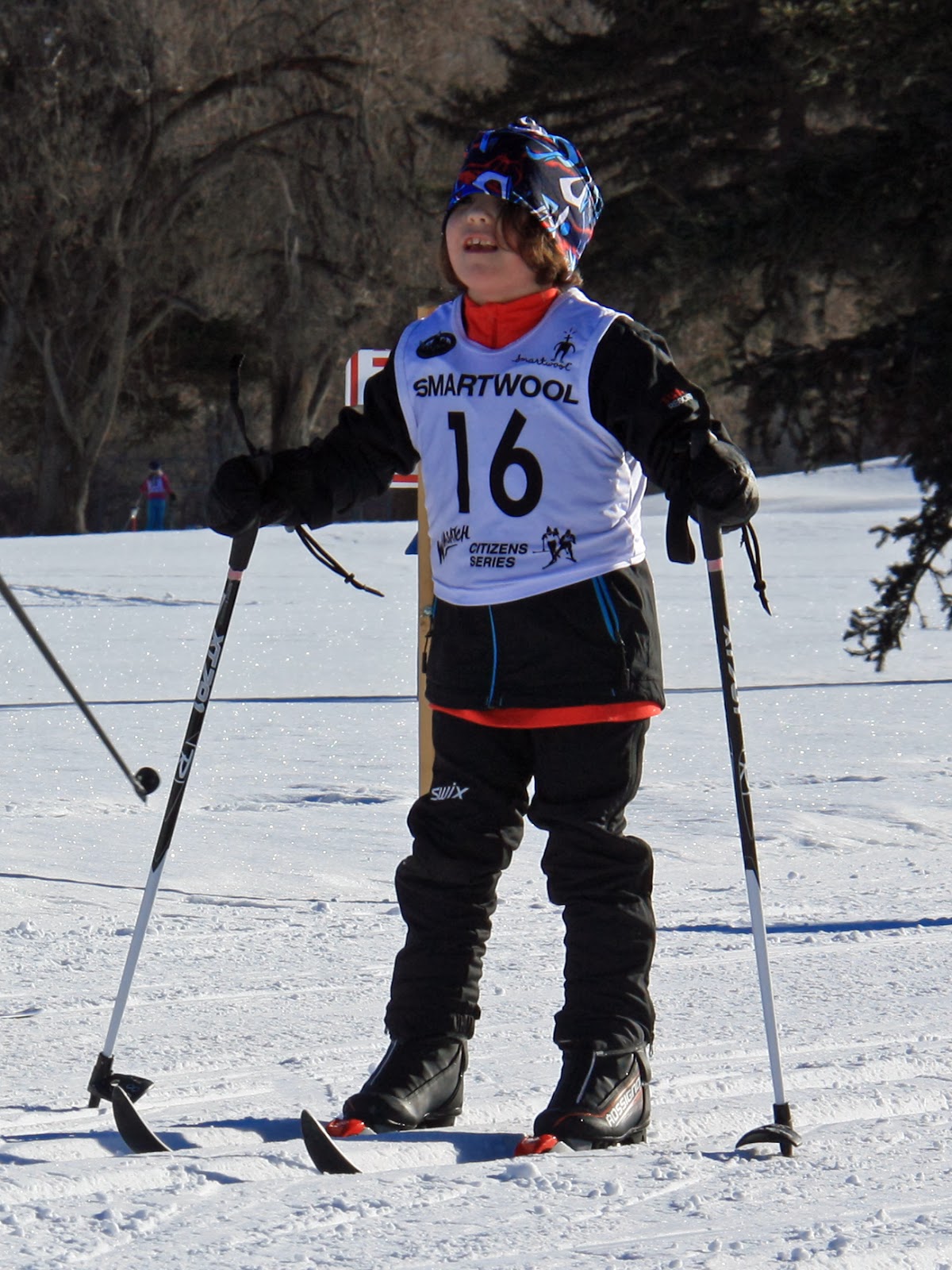 Sash and Ben both did a great job in their races, arriving tired but victorious and almost at the same time from their respective 1 and 2 K loops.  I offered to ski with Sasha but she was very determined to do this on her own and neither kid got lost or took out another kid (that we know of), so we deemed the race a complete success! 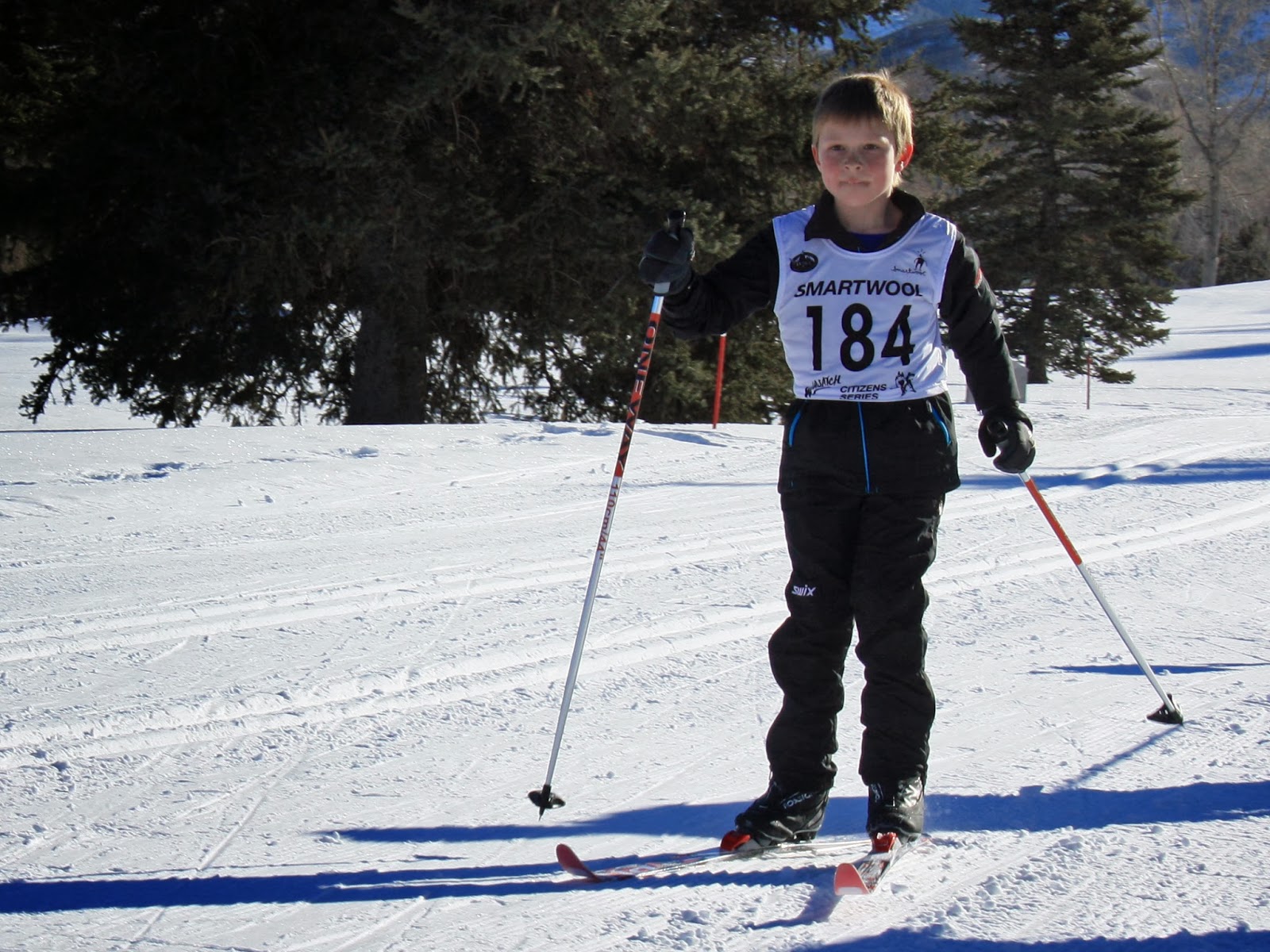 Finally, enough snow to really try out the studded tires! I admit it, dry streets and no snowfall over the past month had left me feeling pretty dumb about investing $150 in snow tires for my bike to ride on cold but perfectly clear asphalt. 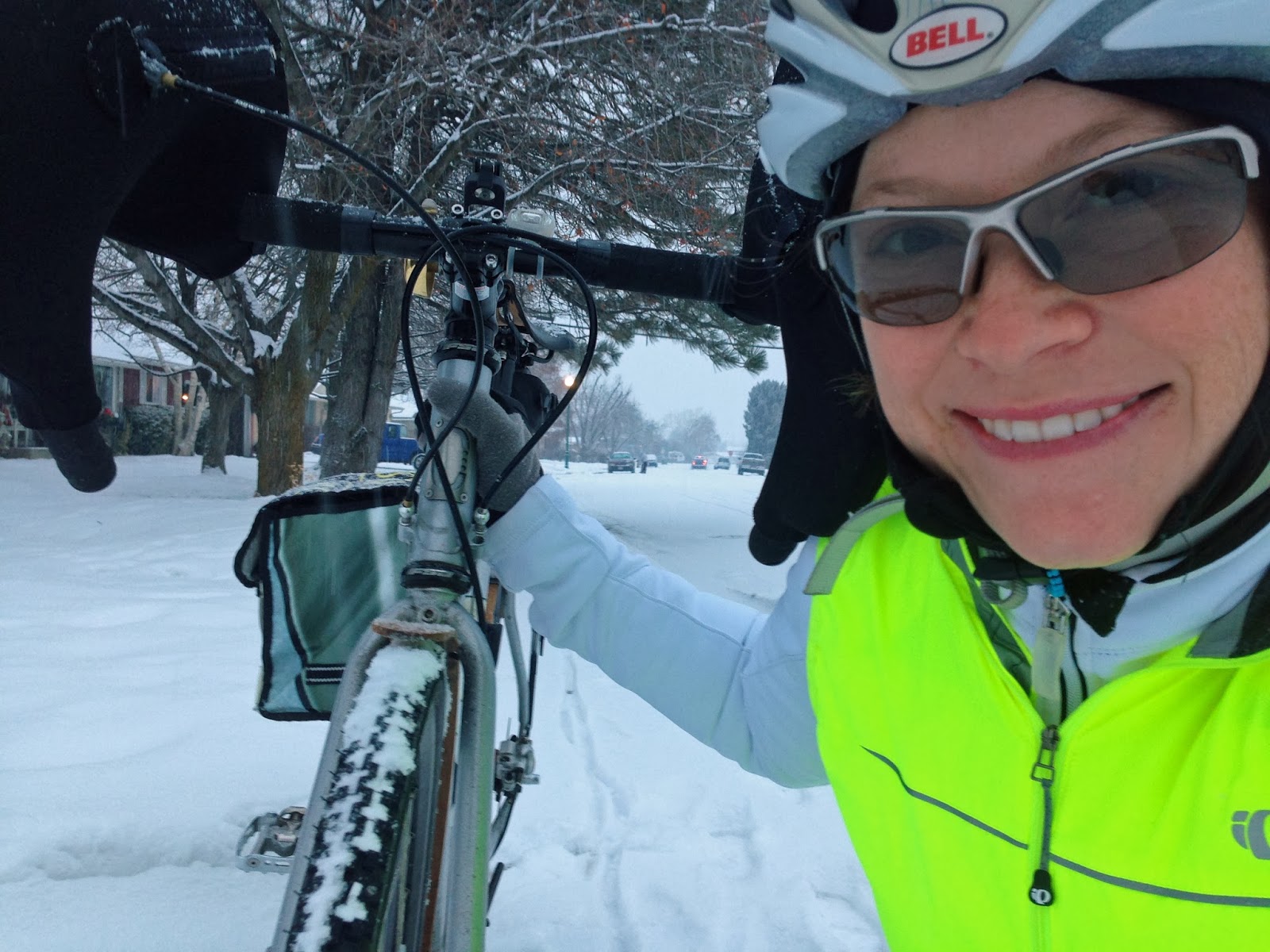 But wonder of wonders, the past two days have brought inches of snow in the valley and feet in the mountains (hooray!) and I finally got to give my Nokian Hakkapeliittas a fair shake in the snow, slush, and slick surfaces they were designed and purchased for.

After 75 clear miles and 40 snowy ones on my studded tires here are my thoughts and reflections on owning studded bike tires:
Overall, I really like my Nokian Hakkapeliittas for winter commuting.   In a couple of inches of snow or the skim left over from a snowplow they feel great and I feel confident on them.

And never you fear, I recognize that not everybody on the road has bitchin' winter tires and I'm especially careful to stay on less-traveled roads in slippery weather.  No matter the weather, I remain grateful that most of my commute is on bike paths where the scariest things I have to dodge are kids on scooters and ladies jogging four abreast!
Posted by Jstar 1 comment:

Great, great, I can't see how this could possibly go wrong.  For everybody who, like me, formerly scoffed at Utah's rule that minors can't buy any fireworks, even poppers, this is why.
Posted by Jstar No comments: 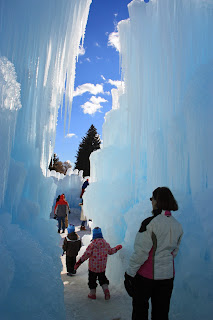 On Saturday we and about five million of our closest friends trekked out to Midway to view the Ice Castles.  It was crowded.  There were a lot of small, crying children. Mom and I spent a lot of time and energy mostly-unsuccessfully dissuading my girls from licking the ice and eating the snow that those same five million people had already walked through.

And despite the headaches, it really was breathtakingly beautiful.  The whole experience was magical.  Mom and I followed the girls down aisle after aisle of ice, looking up into blue skies through frosty icicles and remarking almost non-stop about how very unique and lovely the castles were. 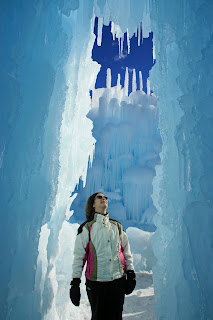 We also spent a lot of time talking about how glad we were to be wearing snow pants and boots and shaking our head at the multitudes who seemed surprised that the ice castles were actually quite chilly and maybe jeans and tennis shoes weren't their best choices in attire.

But never you fear, we always returned eventually to the wonder. 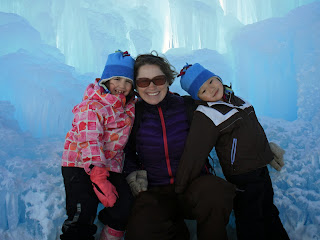 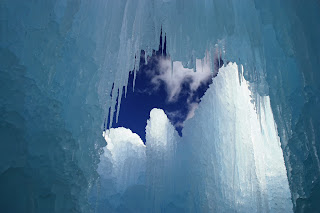 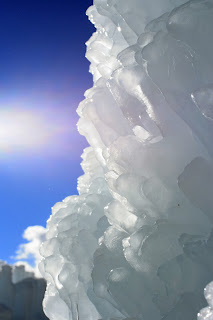 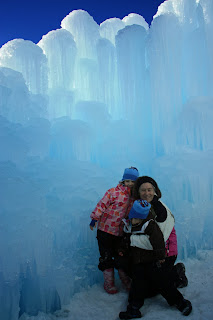 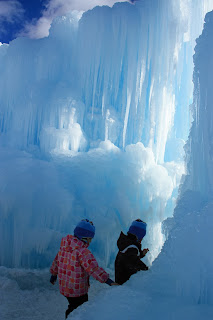 If you find yourself in Midway Utah with a couple of hours to kill, we definitely recommend the Ice Castles.  Bring your snow boots, put on your childlike-wonder glasses, and go explore every twist, turn, and cavern of the castles blissfully humming, "Walkin' in a Winter Wonderland" to yourself.

Just do your mom's frayed nerves a favor and don't lick the ice.
Posted by Jstar No comments:

Q: What happens when your cat decides to bed down in your son's ski racing supply bag?
A: Your son equips him for the slopes!

Ben and I debated at length about this post.  I thought it was a good candidate for Tragedy-averted Tuesday given the clear safety orientation of Ben's work here with Mandy.  Ben thought this was ridiculous because no tragedy was actually averted. I think that's ridiculous since the fact that Ben wasn't scratched or attacked while dressing Mandy up is nothing short of a minor miracle and Tragedy-averted Tuesday is all about how we (Ben) should have lost an eye, finger, or burned the house down and didn't.  But since Tragedy-averted Tuesday is pretty much all about Ben (coincidence?  I think not) I figured I'd let him decide what's approved fodder for our recurring theme and consequently this post is relegated to Ferocious Feline Friday :)
Posted by Jstar No comments:

New year, blue skies, and clear roads - must be time for a bike ride! 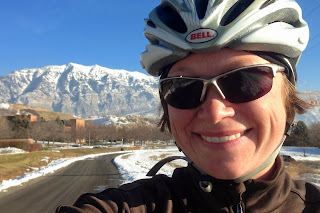 2013 was a wonderful year on 2 wheels and I enjoyed lots of individual firsts.  I clocked over 3,700 miles, completed my first 3 century (100-mile) rides, and welcomed 2 new bikes to the family!  Wahoo!

Cycling has been such a joy and unexpectedly fab new hobby for me.  When Steve bought me a bike for my birthday 2 years ago, I don't think either of us had any idea what he was starting! I'm so grateful he took the chance on a very surprising birthday present - way to go, babe! It's been a life-changing new adventure.

Hopefully 2014 is a year with even more miles, fewer new bikes (for budget's sake!) and lots more riding with friends. 4,000 miles this year?  Yeah, we can totally do that.


'Life is like riding a bicycle. To keep your balance, you must keep moving."