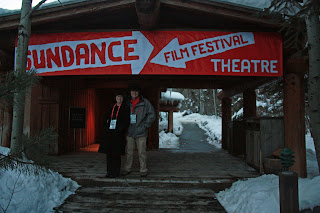 Last weekend was the start of the Sundance Film Festival and we partied like non-locals all weekend!  We were lucky enough to get a really good locals package purchase time this year and got a super-fun package with a great ticket selection time.

So we studied the catalog, we watched the buzz, and we managed to luck out and see four really good shows this year.  And the directors and cast even showed for 3 of the 4 - a personal best!

If you're looking for some culture, we can definitely recommend the following: 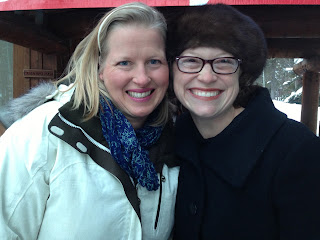 20 Feet From Stardom
This documentary about backup singers was our first screening of the year and was fabulous.  It was one of those magical movies that showed you a previously untold story and fascinating story.  And meeting one of the singers in person and watching a giddy director still on cloud 9 from striking a distribution deal within the last 12 hours definitely enhanced the screening experience :)

Sound City
This documentary about the analog recording studio Sound City was pretty good, but seeing the charming and articulate (and easy on the eyes) Dave Grohl (Nirvanna, Foo Fighters) answer questions and share his enthusiasm for analog recording in-person was definitely a highlight of our Festival weekend. 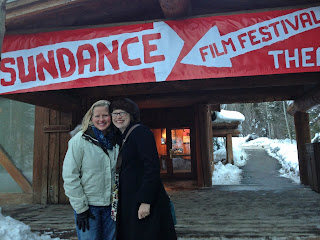 Blackfish
Leave it to Sundance to ruin something else... we can't buy vinyl fencing (thanks, Blue Vinyl) and now Sea World is off the list, too.  Apparently keeping wildly social, intelligent killer whales in a teeny tiny tank is both immoral and dangerous.  Who knew?

I think our 2013 Sundance Film Festival experience was our best ever!  Great movies, fun Q&A sessions with the directors and cast, and delightful friends to share the experience, I think that we're finally learning to do Sundance right!
Posted by Jstar No comments: Links to this post

Ah, Solitude Yurt Day. You are one of my very favorite days of the year, combining so many wonderful things: snow, hand-crafted food, Mongolian yurts, good friends, and inebriated nighttime skiing. Perfection! 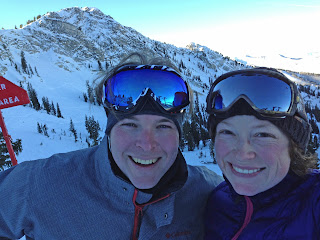 This year we started out our yurt-tastic day early with an afternoon skiing at Solitude.  I'm proud to say that we shut down the slope!  Of course, we didn't start until one... but, still, we made it on the slopes until four! 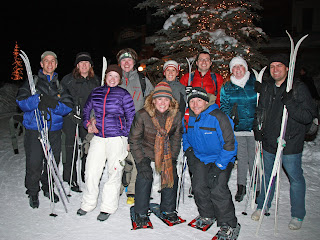 And then it was yurt time!  We met up with our whole small group from church (or Bible study/family group) and enjoyed a fabulous evening together.  The menu was, as always, wonderful (the blueberry bread pudding with butterscotch pudding on top surprised me by being my favorite selection of the evening... but now that I see that sentence written in black and white, it doesn't seem that shocking that such a thing was my favorite item on the menu), the company delightful, the stars brilliant, the skiing hilarious. 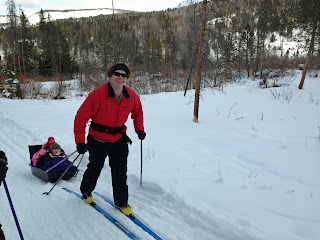 Cross-country skiing is one of my very favorite things to do in the whole wide world.  I love the quiet, the remoteness, and the fact that it's one of those magic things our family can do all enjoy doing together.  With an 8-year span between oldest and youngest, such activities are hard to find! 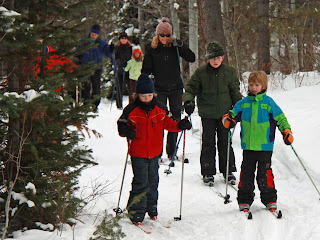 And were doubly-blessed to have friends who enjoy a nordic adventure just as much as we do!  Because if there's anything more fun than one family skiing together, it's two! 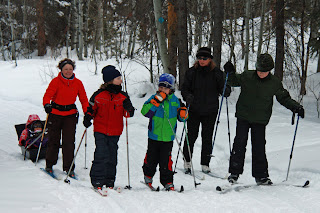 My favorite thing about skiing with kids is that they talk non-stop. It's hard to believe that they're as tired as they say they are when they never stop yacking.  I think kids have two set of lungs - one for exercise (easily exhausted) and one for jabbering endlessly about Minecraft and Halo and Pokemon (which never, ever, ever run out of breath).


Posted by Jstar No comments: Links to this post 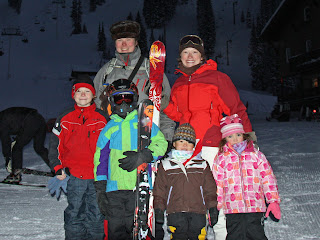 This year my fabulous family very sweetly agreed to accompany me on one of my wish-list events - the New Year's Torchlight Parade at Alta!

Here's the premise:  you go up to the Alta ski area at night in the freezing cold, wait in line to take a lift up, wait in line to get a torch or flare, and then ski down a cat track.  I can't believe this isn't on everybody's New Year's must-do list!!! 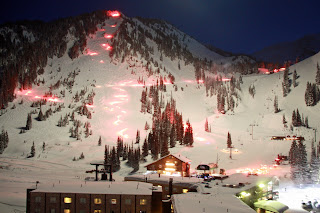 My aforementioned family was very supportive and barely mentioned the bizarrity of our evening's plans.  Ben even agreed to ski with me (which he later regretted when it was 6 degrees out and we had been waiting in the lift line for half an hour... but I'd like to think that the cocoa and cookie I bought him at the bottom made up for it).  Sam thought the parade would be more interesting from the warmth of the car.  The logic is hard to argue with. 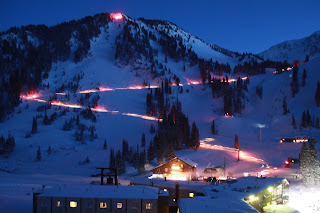 So Steve and the other kids took the car to the road above the Alta parking lot to watch the fireworks and parade while Ben and I skied down.  Steve managed to get some very cool shots of the parade, which is fortunate since if you're going to do something this silly with your New Year's Eve, you had better have the pictures to prove you were there! 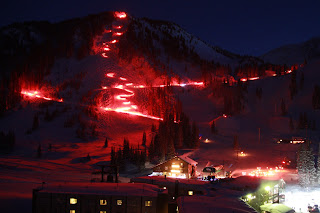 And everyone agreed that they were up for the parade next year, too.  As long as we brought cocoa again.  And as long as I was the only one skiing. 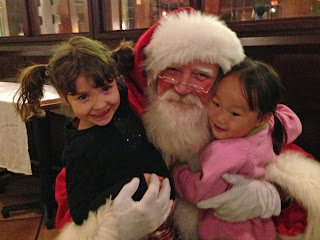 I think I'll just have to resign myself to the idea that all of my posts are going to be 3 weeks late right now.  Oh well, the pictures are cute on-time or delivered tardy!

The girls were really into Santa this year, which is odd because we don't really do the Santa thing, but I guess they get enough of it at school that they are well educated in the rules and rites of Santa.  Fortunately, when we were in DC for Aunt Sarah's wedding the swanky mall had a really sweet Santa (with a real beard!) who indulged the girls' deep need for Santa hugs. 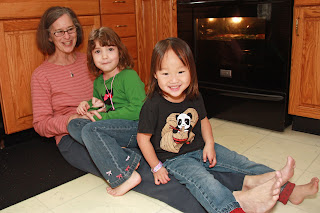 We got to spend lots of time hanging out with my parents, which included some quality cookie-making (and cookie-baking-watching) time for Grammy and her girls. 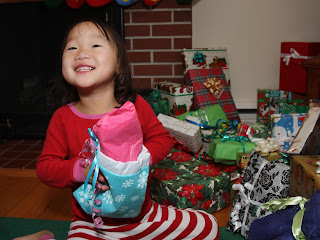 We decided to celebrate Christmas two days early so we had time to play with our new toys all together before heading home on the plane.  The kids were (unsurprisingly) very supportive of Christmas Eve Eve gift opening. 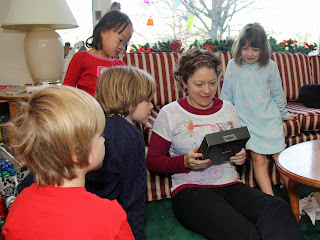 When you have 4 kids (or 3 siblings), you don't get to open or inspect any gift alone.  Fortunately, most of the time we're all very open to "help" with our unwrapping.

New Car for the New Year 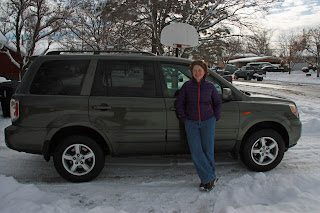 After almost two years of saving and planning and thinking, we finally did it - we got a new car! ("new" of course, being a matter of perspective) She's a 2006 Honda Pilot - all wheel drive, seating for 8, and heated seats - all I need for happy driving with the fam! 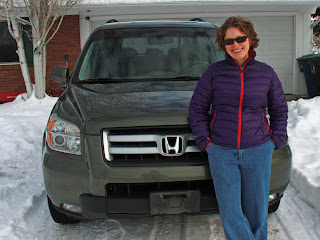 Of course, this means that we spent all weekend researching and ordering the requisite accessories and now the snow tires (with wheels), floor mats, ski rack, and new head unit are all speeding to Utah to complete the package. 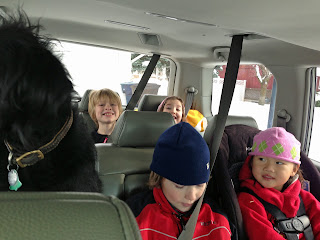 And we enjoyed a very successful first outing on Sunday, transporting 4 kids, a dog, and 6 pairs of cross-country skis in relative comfort to the Uinta mountains for a delightful romp in the snow. 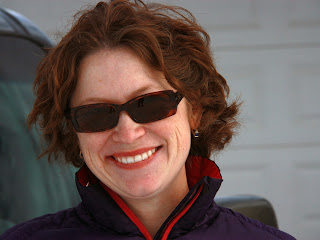