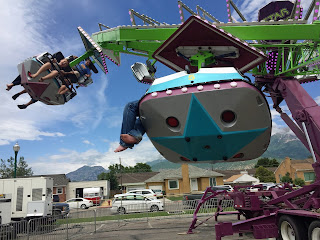 Orem Summerfest is the official start of the Morningstar summer. We await it impatiently. We save our pennies to purchase overpriced corn on the cob and Rotary Club pancakes. We hoard decorations for the parade. We spend our hard-earned money on spinning rides that threaten to liberate the aforementioned corn on the cob and pancakes. And we love every minute of it! 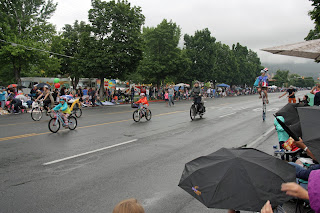 This year we had an unseasonably cool and rainy Summerfest weekend, but it couldn't dampen our spirits! The rain did, however, create some confusion around the Children's Parade. Usually the Children's Parade starts at 7 and precedes the  regular parade - basically it's a chance for kids to put streamers on their bikes and race down Center Street. 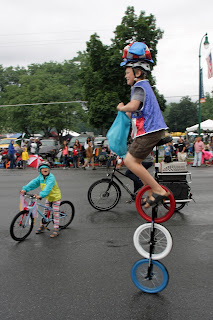 Well, this year we got to the regular meeting place at the regular time - but no Children's Parade! We weren't the only confused paraders, so when 7:00 rolled around we and about 20 others just made our own Tiny Parade. After all, Ben had practiced long and hard to show off on his 3-wheeled unicycle. What's more, he and Steve transformed it into a "red, white, and blunicycle" - so there was no way we were letting a little rain stop that much fun!

And, yes, Ben is holding a bag of candy and throwing it to the eagerly waiting crowd. I think it's fair to say that he was the hit of the parade.

No, he didn't actually hit anyone.

So of course we had to support the Swagen! It's is a VW Microbus that its owner converted into a mobile photobooth. Add funny hats and a photo printer and, voila! instant summer income and built-in road trip!

We came, we ate, and nobody threw up. Another great year of Summerfest.
Posted by Jstar No comments: 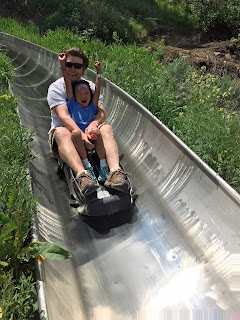 Today is Father's Day, the day when we carefully place presents beneath the Father's Day Tree, eat the traditional holiday meal of cheeseburgers and fries, and pay homage to the best dad ever!

Ok, ok, we might exaggerate a little - but today did bring burgers, gifts, a screening of Finding Dory, and a lot of video games, so I think it was a fitting tribute.

But the even better celebration of the kids' fabulous father was last weekend when we hit the Utah Olympic Park for a full day of adventure. 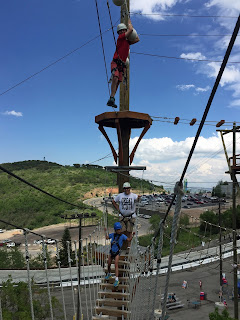 My favorite moment of the day was when we were each suspended 30 feet off of the ground completing one of our six rotations on the ropes course. The kids posed for a very sweet and smiley photo and Steve remarked that it's a lot easier to get Ben to smile for a picture when he's wearing a harness.

Ben replied, "Yeah, we should do our next family pictures up here on the ropes course! This is way more like our family than our other stupid portraits!"

Well said, Ben. I'm so grateful for a family that adventures together!

It was a heck of a great day!
Posted by Jstar No comments: 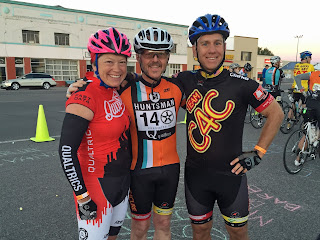 140 miles is a big goal. It's a big, exhausting day that we excitedly sign up for, pay entry fees for, train for, get up at 3:30 am for, and bust our butts to achieve.

Today I was proud to ride with Team Qualtrics and Team Cycle4Cure in the Huntsman 140 to benefit the Huntsman Cancer Institute.

I rode in honor of those we have lost, in support of those fighting tough battles, and in the hope of a bright and healthier future. 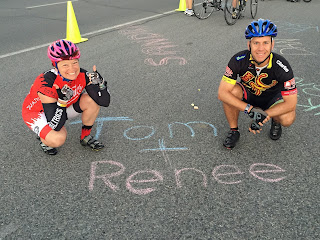 I rode in honor of my mother-in-law, Sharon Morningstar, who we lost to ovarian cancer 5 years ago.

I rode in support of Tom and Renee Bradley who are in the care of the Huntsman Cancer Institute fighting melanoma and breast cancer. 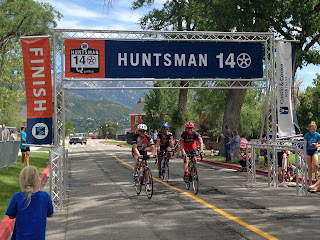 And I rode in hope of a healthy future. At current rates, 2 in 5 of us will fight cancer in our lifetimes. We must do better. Today's ride is in support of the Huntsman Cancer Institute, where scientists, doctors, and caregivers are making tremendous progress in today's treatments and tomorrow's cures.

I am so proud and grateful for this ride and all it stands for. 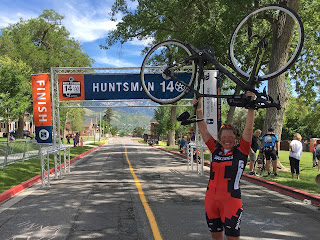 When the day came we got ready, went camping, and we had 4 other friends ride on the bike ride. Their names were Jess, Karla, Hope, and Marcia. We had fun riding with our friends.

It was hard but we trained very good for it and it was fun riding with our friends.  When we were riding the 70 mile, people said that was cute and their day was cheered up.

Our family and Zach's family cheered for us while we were riding. After we finished our goal we got ice cream and a bracelet that said "Little Red" on it.