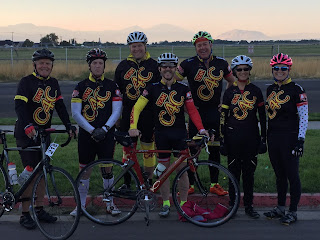 It's a beautiful, once-in-a-lifetime feeling when you find that perfect athletic event, that perfect challenge that pushes you to your limits and back again. The event that showcases the unique balance of skills and God-given talent that makes you you; almost like it was designed just for you. The event you dominate, almost without even trying.

For us, the Utah Tour de Donut is just such an event. 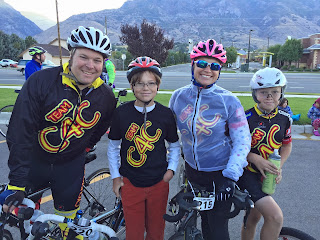 Last year, you'll recall, Steve and I killed it in the tandem division. Seeing as tandem was no longer a challenge, this year we decided to pull together a 5-man team with our good friends from Team C4C. 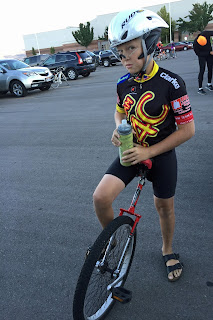 Ben entered in a bit of an underdog category: The Unicycle Division.

(no, there was not actually a unicycle division, although we're officially petitioning for one next year)

He completed one 7.5 mile loop, which is pretty freaking amazing.

He wasn't fast. But what he lacked in speed, he made up for in style out the wazoo. Aero helmet. Full cycling kit. Birkenstocks. The boy rocked it. 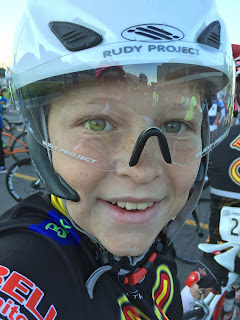 What, you ask, is the Utah Tour de Donut? Glad you asked.

The race is an event that combines cycling prowess with grotesque amounts of donut consumption. The race itself is a timed event with three 7-mile loops. After loops one and two, the athletes stop to eat donuts. Three minutes is deducted from your total time for each donut consumed. It's beautifully simple; nauseatingly difficult.

Oh, and it all benefits the Rotary Club and a local food bank, which is pretty cool. But not as cool as the glow of glorious victory!!! 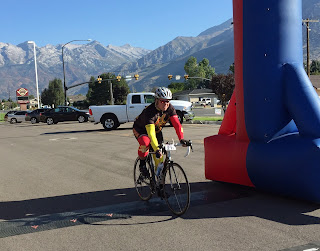 How did we fare? Well, Steve ate an inspirational 17 donuts, and I held my own with 8. The Donut Queen (most donuts consumed by a woman) ate 9, so Steve was pretty disappointed that I didn't manage to down one or two more and earn that title. I'm just glad I didn't toss my cookies donuts. 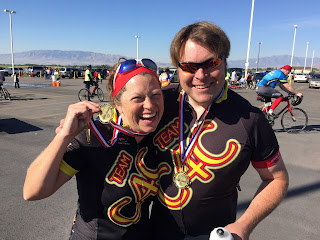 Team C4C had an extraordinary showing with 8 medals overall. We were the first-place team, and I won second place for my age group and second place woman overall! My mom won for her age group as well.

And there were no "reversals" and all smiles at the finish - so I think it's safe to say that a very good time was had by all! 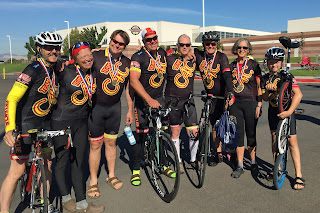 To the Moon and Back Again 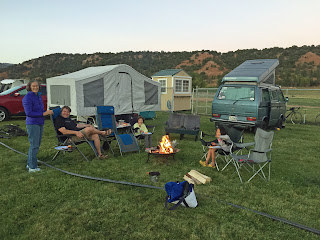 Ah, cycling. When it comes to riding, and especially riding for a good cause, it suddenly feels completely normal to drive hours to the middle of nowhere, camp overnight at a rodeo grounds, wake up at 6 am on a Saturday to frosty temperatures, mount a trusty two-wheeled steed, and ride, ride, ride. 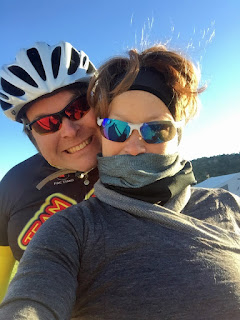 This weekend brought To the Moon and Back Again, a ride in the High Uintas benefiting Rapha House, an organization that rescues kids from and works to prevent sex trafficking.

We woke up to frost on the ground, so I put on multiple layers of merino and chose from my wide array of mittens that I carry to every ride.  Steve put on... arm warmers. We have different ideas about appropriate attire for 30-degree temperatures. 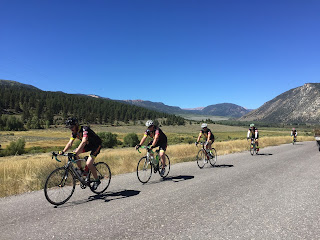 And we were off! We rode with 7 of our friends from Team C4C and enjoyed a challenging but wonderful day of riding.

The whole course was 95 miles long with an ascent of 5,250 feet - it was a very big day and we were fortunate to have beautiful weather and good friends and a great cause to keep us going. 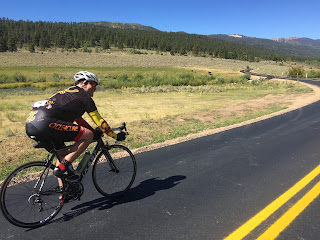 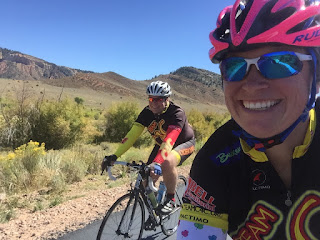 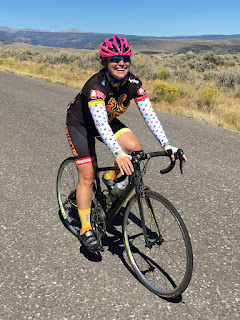 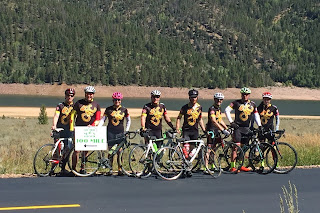 We made it all the way to the Moon (Lake) and back again!

Next week we conquer the Tour de Donut. That ride plays to our strengths a little better than all that climbing :)
Posted by Jstar No comments: 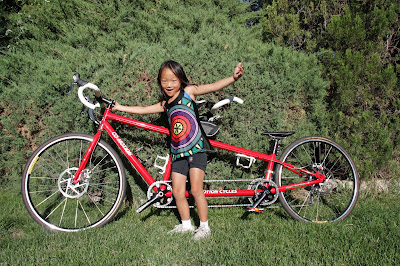 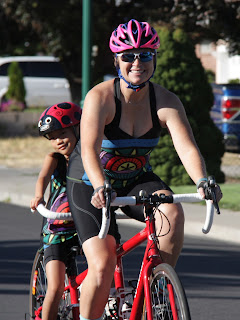 I'm proud to announce that we're a two tandem family!

Now, I hope you're not going to start asking silly questions, like, "Don't you already have a tandem bike?" or "How many bikes do you need?" or "Do you have room in your garage for all of those?" because those are ridiculous (yes, one more, no). 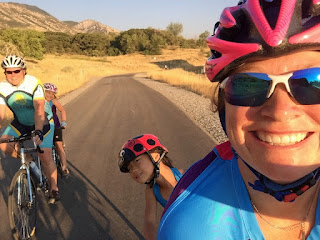 Now all we need is a matching jersey for Dad so we can all coordinate! He's still resisting, but I'm pretty sure he'll come around... 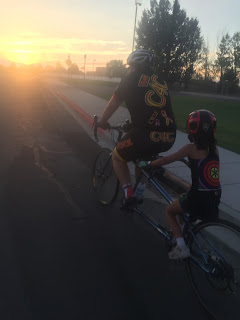 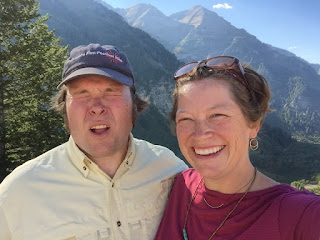 Bearclaw Supperclub may be the culinary highlight of our year. It combines all of our favorite things: Sundance, hiking, sunset, down jackets for chilly evening breezes, amazing views, amazing food that we had zero involvement with preparing.

And, of course, we try to keep it classy. You can tell by this well-timed mid-sneeze selfie. 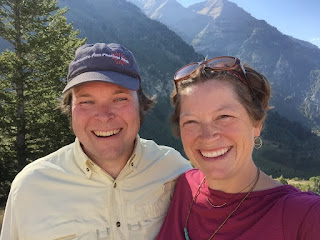 Being keen believers in earning one's moscow mule, we started our evening by hiking from the second stop of Ray's lift to the top of back mountain. It's one of my very favorite hikes... probably because I only do it when I have the Bearclaw Supperclub to look forward to! Plus, I always get to hike to the summit with my very favorite hiking buddy. 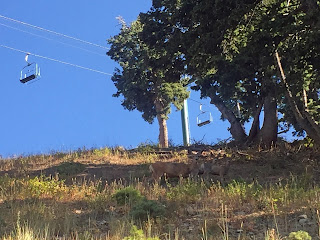 We were treated to a fab view of a deer family this year. See them hiding in the shadows, posed perfectly for us all in a line? Yeah, that's how the wildlife behaves at Sundance - always photogenic. 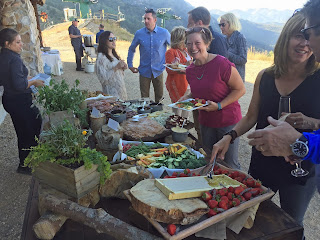 And before we knew it, we had arrived! (this is not actually true, we sweated and gasped up the whole ascent, but we'll pretend that we arrived swiftly, looking glamorous and totally-not-out-of-breath)

Regardless of our state at the summit, climbing a mountain to find a local honeycomb, charcuterie, and extraordinary little finger foods at the top will get you up any slope! 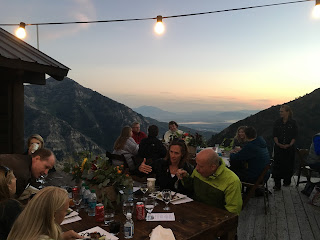 And as if the appetizers alone weren't enough, check out the dinner view! And, yes, the food lived up to the view, as did the wine and dazzling company.

Bearclaw Supperclub never disappoints - add it to your must-attend list of outings next summer and save us a seat! 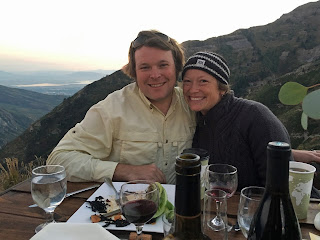