I think all casts probably smell not-so-fresh after a month, but toddler casts?  Uck.  Toddler casts after soaking them for an hour so they're easy to remove?  Unbelievably uck.  Seriously, words do not describe.

Anyway, [trying hard not to fixate on the memory of the stench] the cast removal was super easy and rather unceremonious.  I guess after living with that thing for 4 weeks, I expected some sort of drama regarding its removal but (thankfully) there was none - the nurse cut it open and WanYing pulled her hand out easy as pie (that's why you soak it, so that the bandages don't stick)! 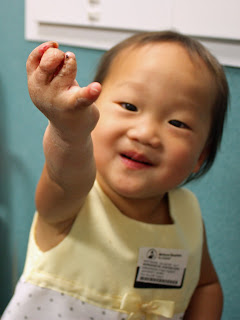 Admittedly, and unsurprisingly, the hand looked kinda grosso at first.  I mean, a month's worth of dead skin and surgery scabs is kind of destined to look icky.  But even amid the yuck the miracle was right there before us - a thumb and four fingers, all free!  Amazing!

At first, WanYing was fine with it.  I think that she was just relieved to have that blasted cast off.  Then she kind of freaked out.  I think it was all just (understandably) too much for her - she didn't want to look at her hand and just nestled in my arms for a few minutes.

But once the shock subsided,  she started poking those fingers and moving them around, rubbing off the ick, and insisting on washing her hands.  She is simply amazing - if I took off a cast to find a whole new hand, you better believe that I'd need more than a couple of minutes of cuddling to get used to the idea!

I love this picture - can't you just see the wheels turning in her head as she makes sense of all this craziness? 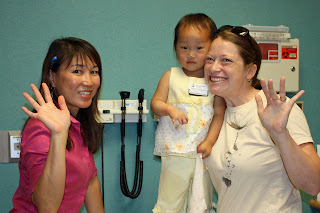 The whole thing was so ridiculously easy.  Dr. Wang checked her out and gave us the all-clear with the simplest of instructions - we're supposed to rub the scars with vitamin E oil to help them subside and help her fingers to be less sensitive, we need to encourage two-handed activities, and we need to give her a variety of textures to play with to help her new fingers and now-exposed palm to be less sensitive.  Oh, and she has a silicone spacer (basically a cast of her palm) that she's supposed to wear at night to help her hand stretch and provide pressure for the scars so that they heal nicely. That's it!  We come back for a checkup in 2 months and may need to do OT at that point, but for now we just get to let her be a toddler and figure her hand out on her own.

WanYing was a little extra fussy and clingy tonight, but other than that was no worse for the day's adventures. We headed to Red Butte Garden for a quick picnic lunch and then it was back to life as usual.

She is beautiful, indeed! :) You do such a great job of journaling. (I can almost smell the stinky cast myself.)

Oh tears for me.. such an amazing gift for her. Amazing! Thanks for sharing Jamie!!

She IS fabulous! What a strong little girl! So happy for her and for you guys that things have gone so smoothly!

What a beauty this little girl is. What a blessing she is!

Yeah whooo!! Nice job everyone - WanYing, Mom & Dad, doctors and of course The Big Guy. It's so exciting to see one of life's little miracle happen right before your eyes. So thrilled for you all.

this made me cry. She is amazing-so resilient and you are the coolest mom EVER. :)

Yay! She is very beautiful. I'm glad the cast removal was so easy for everyone involved.

If you have some time, check out this blog post. A friend of mine also recently adopted a 2 yo with ABS who also recently went through surgery. Talk about a stinky cast!! :-) http://bornofindia.blogspot.com/2011/05/post-placement-and-poop.html

How beautiful! The whole family is such a wonderful example of supporting each other. Bless your hearts ... and thank you for sharing, Jamie. It brings a smile to my face and a tear to my eye. Blessings to all of you!

I'm so excited to see her cast off. I've been checking back at your blog over and over to see her hand post surgery. It looks awesome! wooohooo! thanks for letting us into your experience. As we feel called to adopt a little girl from China with ABS, it is wonderful to see you going before us. Thanks for reaching out to me on the LD group. God bless your family!
love,
Amber

Yesterday I received the postcard with the photos, I was very happy! Thank you very much! For all and especially for having put that beautiful smile to WanYing.

There are no words for that picture of her examining her new hand. Just amazing.