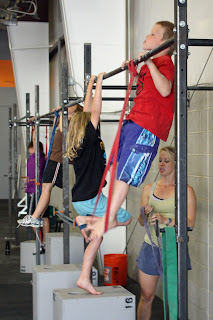 In an attempt to counteract the seemingly unending months of video games interspersed with occasional solar overdoses at the pool, the boys are participating in CrossFit Kids this summer. It's like CrossFit (this is where Steve goes to the gym and is brought to tears by the workout and then goes back the next day to begin the cycle anew. Yeah, I don't get it, either) only for kids. The childrens' version seems to involve less crying than the adult version, although that may simply be explained by the fact that our kids are far more fit than their parents. 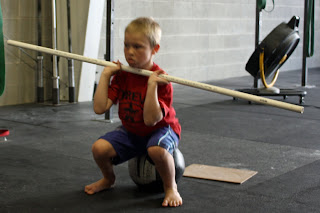 Although both boys are participating in CrossFit Kids and seem to enjoy it, Ben is unsurprisingly embracing it with more gusto. I particularly enjoyed this conversation a few nights ago:


Mom: What did you do at CrossFit?
Ben: We did races and it was boys against girls and the boys always were slower except when it was my turn. Sam was the slowest one of all.
Sam: Well, I was just jogging.
Ben: Yeah, and I was running.
Sam: [In his customary superior tone, which is simultaneously grating and hilarious] Well, jogging is more energy efficient. Go green!

That's a classic conversation from the boys! I know several people who might want to use the "go green" excuse for not exercising hard!