We got home at 4 pm today - fewer than 24 hours after Sasha went into surgery! She was doing so well that the docs and nurses agreed that we could take her home as long as we are careful that she drinks plenty of fluids and stays hydrated. Wahoo!

Sasha obviously did really well in the hospital today - Dr. Siddiqi's resident checked in on her in the morning, removed the despised tongue stitch, and remarked one more time on the width of Sasha's cleft (do you detect a theme?). She enjoyed some Spaghetti O's for lunch and after that they removed all of her monitors and wires so that we could go on a walk and enjoy some freedom. And once Sasha realized there was a big wide world outside of her hospital room, there was no going back! She ran up and down the corridors and had a blast greeting the various dogs that were visiting to cheer up the kids. They even let us give her a bath to wash off all of the gunk from the previous day. The only times she got mad were when we tried to prize the yogurt cup from her vice-like grip (she kept dozing off and spilling the yogurt - gross) and when we tried to get her back into the room after our walk - no way was she going back in there! 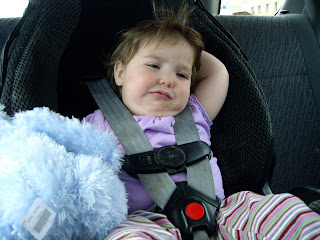 So a little after 3 pm we packed up and were out of there! As you can see, Sasha was a little groggy in the car, but she had a nice nap as we drove home from Salt Lake and filled her many prescriptions and she perked right up as soon as we got home and she saw her brothers. 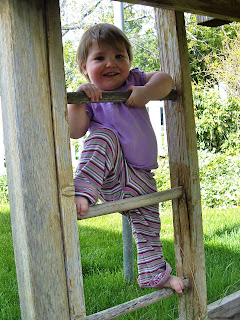 And here's our "sick little girl" this evening - can you believe it?!? She comes home 24 hours after having her mouth hacked apart and decides to learn to climb up the ladder to the playset all by herself! She just amazes me. I fear that she may have inherited Ben's monkey-climbing gene (I believe that's carried on the paternal side). Don't worry, we'll keep her off of the really high acrobatic equipment until she's off of the loopy pain meds.

Here are a few other shots from our happy reunion this evening: 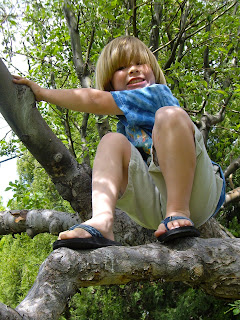 Ben shows off his apple-tree dismount 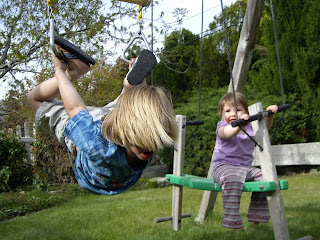 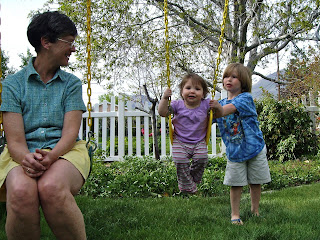 A pleasant evening swing - now this is the pace befitting a little girl who just came out of surgery!
Posted by Jstar

Oh, goodie. So glad to hear you guys are home. Sasha looks great; it's amazing the bounce-back qualities of children. It will all dim in her memory, and pretty soon she'll be the biggest talker in the bunch. Thanks for posting and letting us know.
Evelyn

Congratulations once again. So glad you are all home safe and sound.

Kids are amazing! I'm so glad that Sasha doesn't seem to be in pain anymore.
-Sarah

She looks so good! Good thing you documented the hospital stay - or no one would believe you!

Here's hoping she continues to be footloose and pain free! (I just realized that sounds like a hospital campaign.)

So glad she's home safe and well, and that everything went fabulously.

The dreaded tongue stitch sounds exactly that! I'm glad it's gone. And the yogurt story is so cute- I can picture her doing that.

I'm glad all is well and Sasha is on the road to recovering and climbing. :-)

Wow - I am glad she is recovering so well.
She is so cute!

Isn't it just amazing how quickly they recover? If that were me I would still be moaning and feeling sorry for myself. Not Sasha-what a trooper.

Wonderful news. She's definitely on the mend (and on the go).

Glad to hear Sasha is home!

Hey, I think Valeria has that same monkey climbing gene - maybe it is a Karaganda thing?

So glad to see Sasha back at 'em.

Congrats to you and Sasha. She fits in so well with her big brothers...SURGERY? Nuttin but a thing mom~! She is a doll. :)

i am just catching up....i am so glad that sasha did so well! your kids are absolutely beautiful!

I'm so glad it went well! Have been gone for a couple days so I'm just catching up :)

It is just so amazing how fast kids bounce back from things like that. So glad she is home and safe.