Confession: I dearly love white elephant parties. Get a bunch of friends together, trade junk and hideous gifts from distant relatives, and hope you're not the one who gets injured in the melee (and, yes, somebody always gets injured) - it's the recipe for a perfect party!

Here are selected photos from this year's small group party. You know you go to a good Bible Study when you can add color commentary to photos like these:

Kristen gets the evil eye from Sasha. Apparently that was the gift that Sasha was planning to take home? 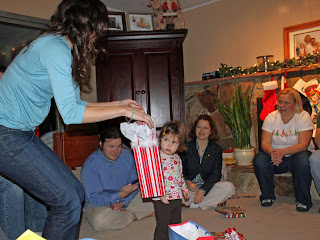 Why does Kristen look so excited about opening her gift? Hasn't she ever been to a party like this? Guaranteed - there is nothing in that bag to get excited about. Notice Jim's trepidation - looks like somebody isn't fooled by pretty wrapping! 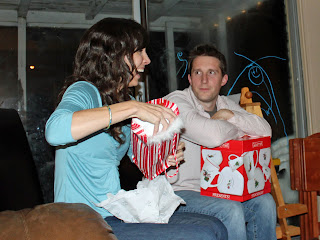 And the gift is... Doggie Diapers! Yet she still looks excited, though maybe a wee bit confused. And why does Steve have a slightly wistful look in his eyes? 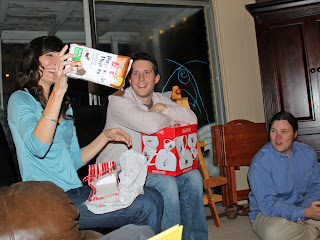 Judy carefully studies her travel urinal. Eric looks perhaps a little angry about the gift... which is ironic since you'd expect him to be the one in the pair who could actually benefit from a travel urinal (even though the package says that it can be used by either gender. Call me a scoffer, but I'm not believing that for a second). 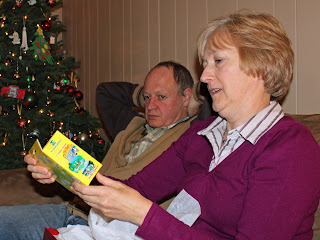 Is Eric actually interested in the hand-me-down DVDs? I'm thinking he's always wanted his very own copy of Cast Away. It is the two disk special edition, after all. 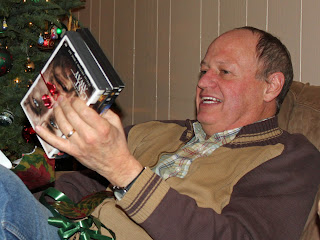 False alarm on the gratitude, Eric is actually now thumbing his nose at the DVDs. What, doesn't he need a copy of Six Days Seven Nights? 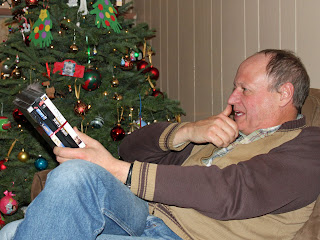 But the best present of the whole night? That's right, folks, canned horse from Kazakhstan! We warned you back in March that it was coming! I think Laura may be genuinely excited about her single serving of Mr. Ed! 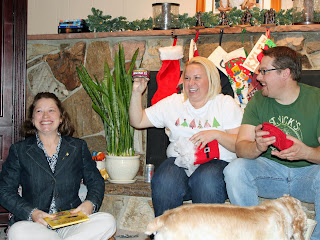 And check out Kristen's elation on ending up with the canned horse! And can't you just see Jim plotting how to use it in one of his culinary masterpieces? I'm telling you, it's all the joy of Christmas in one little can. Truly, it is better to give than to receive. 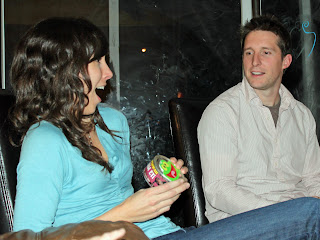 Merry Christmas to all, and to all a good night
Posted by Jstar

thanks for several giggles at the end of a long day! They were much appreciated.

Great commentary.....looks like a fun party. I wish we had brought some canned meat back....what a great idea! ;)