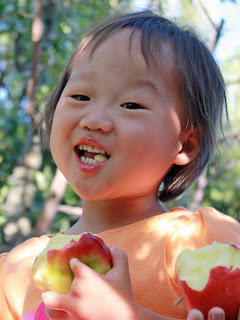 You know that things are humming along smoothly(ish) in Morningstarland when it's been four months since our last medical update!

WanYing had a checkup with her hand doctor at Shriner's earlier this month and her doc is very happy with her progress.  Dr. Wong is satisfied with the healing and mobility that WanYing has gained with her new hand and right now doesn't recommend any additional surgeries or even any physical therapy other than continuing to encourage her to use both hands as much as possible. Sasha had her normal yearly panel appointment up at the Primary Children's Hospital Craniofacial Clinic a couple of months ago and her plastic surgeon, pediatric dentist, and ear-nose-throat doctors are all still very happy with her palate closure and the way her jaw is growing in.

The orthodontist warns us to prepare for large orthodontic bills in our future :)

Also, Sasha's plastic surgeon thinks that Sasha is tongue-tied enough to warrant the little surgery to free her tongue.  Right now, Sash can't even lick her top lip, which can definitely interfere with her ability to make certain sounds.  So we're expecting to do that itty bitty surgery sometime within the next few months, but don't have any dates set yet. 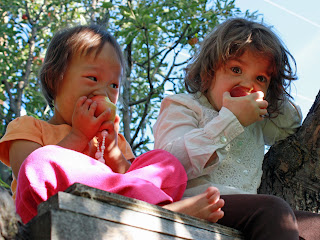 The cool thing on the Sasha speech front is that Sash recently qualified for a cleft palate speech therapy study through the University of Utah.  The study was tailor made for us - preschoolers with cleft palates who can fail a speech test and pass a cognitive test.  Ding ding ding!

So, now that she's done her testing and baselines, in a couple of months she'll start speech therapy - twice a week, in our home, for ten weeks for free.  Wahoo!  She'll be pronouncing all of the letters in, "Sam's Fast Fan" in no time!

And that's about it for now.  Our girls are mercifully healthy and generally happy and we're budgeting far fewer for copays in 2012 - here's hoping!
Posted by Jstar

I am very happy that everything is going so well!!!

They certainly look healthy, and happy to be together. Congratulations on the good news!