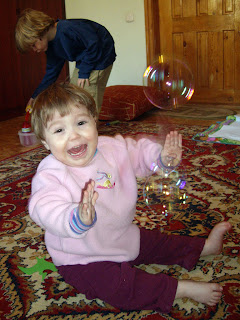 Wow, can you believe that I've been in Kazakhstan for fifty days?!? That makes it sound like a really long time. Ok, it is a really long time... but it doesn't feel like 50 days. Time does fly when you're having fun becoming a family :)

We had two big events today: we finally broke out the bubbles and we visited the zoo! This is our last week in Karaganda, so we're really living it up. 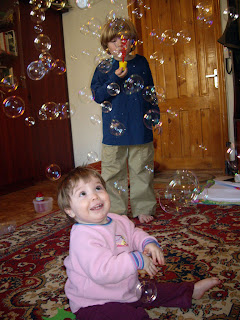 The bubbles were a fantastic hit. We had intended to bring them on our original flights, but they were postponed because of the weight limits and Steve brought them out last week. I think the anticipation just made it all the more fun. The boys had a wonderful time blowing bubbles for their sister and as you can see, Sasha was enamored with the whole experience. Plus, we managed not to spill bubble solution on anything, which I believe is a record for our family! 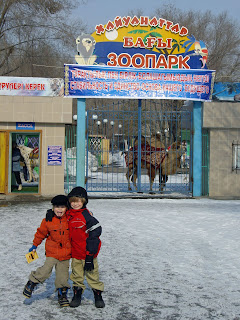 And then there was the zoo. Wow. Big, big fun. Honestly, we came with low expectations. After all, this is a zoo in a city in Kazakhstan that is smaller than Salt Lake. Plus, Oxana said that it was "really sad," especially in winter because most of the animals were indoors.

I'll admit that there were a few sad looking enclosures, but all in all the zoo was far larger and much nicer than I had expected. And it was a bargain - the boys were free and Steve and I were only 200 Tengue each! Of course, we did have to pay 800 Tengue for the privilege of taking photos. Oh well, it was still $8 (total, including admission... well, $9.50 if you include the animal rides) very well spent!

Here's a run-down of everybody's favorite part of the zoo:

Mommy's favorite part, hands down, was Ben's camel ride. I mean, come on - how cool is this?!? I definitely look forward to saying, "remember your camel ride in Kazakhstan?" to him when he's 30 and watching him roll his eyes. 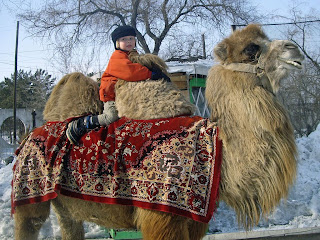 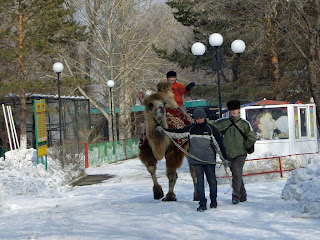 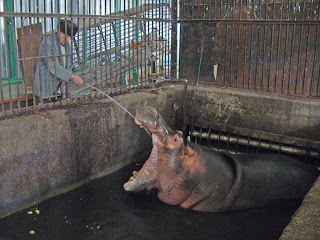 Daddy's favorite part was the hippo. I'm not really sure why, because this was one of the enclosures that I would put in the "sad" list (although it wasn't as bad as this picture makes it look - they were cleaning his normal enclosure so he was in this pen temporarily). I think Steve just loved seeing how ginormous the hippo's mouth was when the zookeeper squirted water into it. I'll admit, that part was really cool. 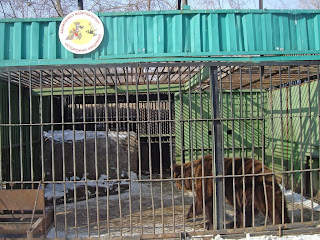 Ben liked the bears the best. He really liked it that the bears kept running around in their enclosures, which was the exact same part that made Mommy nervous (probably impacted a little by the sign above their pen - see the close-up). He actually said that next time he would like to ride a bear instead of a camel. Great. 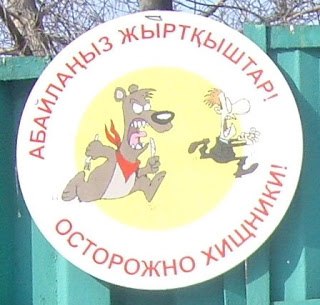 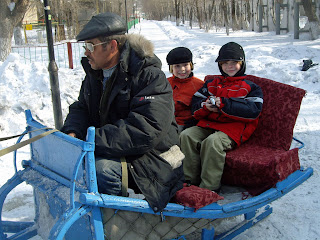 Sam also said that he liked the bears the best (cop out!), so here's a picture of Sam and Ben on their horse-drawn sleigh ride. After they left, I couldn't help but think, "My sons are now out of my sight on a horse-drawn sled in Kazakhstan" but I did successfully choke down the panic. 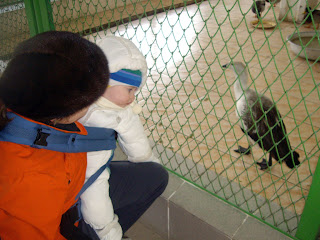 Sasha's favorite part was the ducks. The kid loves ducks and makes a heck of a quacking noise whenever she sees something vaguely duck-like (her duck window cling, pigeons outside, and now peacocks and ducks and chickens at the zoo). 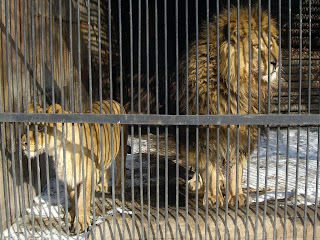 Jennifer was on our field trip as well and her favorite part was leaning over to me at the lion cage and telling me, "that lioness is totally planning to eat your boys," which was definitely true - just check out the look in her eyes!

But we all emerged from the Karaganda Zoo unscathed, one more adventure under our belts!
Posted by Jstar

I am totally laughing over the close up sign! Someone sure does have a warped sense of humor, but the point certainly was made no matter what language one speaks!

I think the camel ride was awesome too! How cool is that?

I am also laughing over the sign! It turns out, the sign reads "Beware of Predators!" Wow, that does sound scary! I really liked the pictures! Sashka is so cute!

What a great memory! Can ya come home now so we can meet your newest member? You can always blow bubbles here and we do have a zoo :) Just teasin'... we miss ya and looking forward to your safe arrival next week.

oh my gosh, I am so glad to find your blog. we adopted our Sophia from the same baby house...it used to be called Nezabudka. We have been fundraising and have been waiting for a family to travel to that baby house to send money to so that shoes and underwear can be purchased for the kids. Please tell me you have a paypal account and you would be willing to purchase the items and make sure the kids get them. The whole story can be found on www.karagandakids.blogspot.com We stayed at the Cosmonaut for 2 months and really loved Karaganda. Have you gone to Asorti for lunch? Rainbow is really great for dinner and the owners are so nice. our travel blog is www.2kaz4sophie.blogspot.com

please please tell Marzhankul (the head of the baby house) the Elrod family says hello. She came and hung out with us when she visited the states. Do you have an e-mail? I would love to send a picture for you to give her. Please e-mail me so I can hopefully Paypal the money to you. Thanks
murielcollison@hotmail.com

Also, I am the founder of Kazapalooza...I saw it was on your sidebar...are you guys coming?