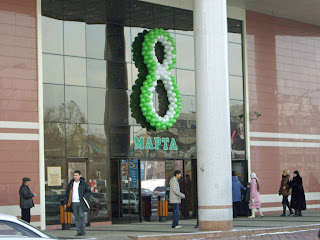 It's really tough being a man in Kazakhstan. Not only do you have to buy your sweetie something nice for Valentine's Day, on March 8th there is another of the Hallmark empire's manufactured holidays known as Women's Day. It's as bad as it sounds. Not only do you have to buy your significant other a gift as good as your valentine's one, now you've got to get Mom one too. Geez, it's enough to make a guy go broke. So we saw lots of women walking around clutching flowers and candy boxes. And the men with them always had this serious or slightly mad expression on their faces (Oh wait, that's just like every day). And it appears to be a bank holiday similar to independence day. All the government buildings are closed and people were setting off fireworks last night. 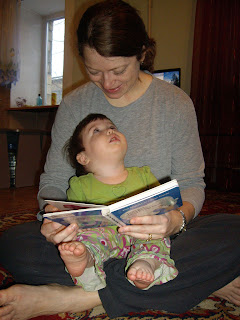 I suppose it's nice to have a day to celebrate all women, but maybe they could spread out the joy a little. It seems a little silly to have all the good gift giving happen at the same time.

So Sam, Ben and I celebrated Women's Day by giving Sasha and Mama some time alone together. I treated the boys to a morning at Babylon, the local video arcade. What an orgy of excitement and flashing lights this place is! It was decorated with all these hanging baskets and fake vines coming from the ceiling. Maybe the Babylon they are thinking of is different than the one I was thinking of... the name "Babylon" doesn't really inspire "children's arcade" images in my head. But no matter Like most modern arcades you have to buy a card that contains credits on it in order to use the games and rides. There were a few rides that you'd swipe your card at a turnstile and then it would turn around to allow you in. There were bumper cars and laser tag and a 3D movie and a play ground with a ball pit and a small carnival ride that went in circles. It's exhausting just describing it all. 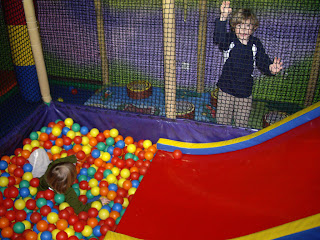 As we were heading in, a woman at the door handed us chocolates. I suppose that's to get the kids hyped up and running around more. Luckily the kids handed me the candies because they thought that they tasted nasty. Mwu-ha-ha-ha cordials for Daddy! I win again! They spent a good deal of time in the playground area going down the slide that ended in a ball pit. The play ground was typical of the type that you could find at any good McDonalds circa 1996. Nowadays it's hard to find a good ball pit and tubes with slides combination like this one. After they ran themselves out at the playground, they went on to the carnival ride. It reminded me a bit of the Dumbo ride but dumber. It went in circles and up and down, but after the fourth revolution Sam remarked, "Dad, this is booooring." I don't know what he expected. It's not like the thing was going to go upside down. He was riding in a frickin' Panda bear after all. 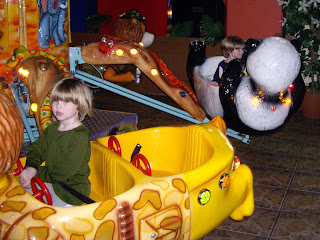 I challenged them to some bumper cars and proved that all my years behind the wheel of a real car have paid off. Ha-ha-ha! Papa gave'em whiplash! I was doing great till they both pinned me against the wall. Then we got stuck. Where the heck is reverse on those stupid cars anyway?

We played some skeeball and won a few tickets. We went to redeem them and Ben was visibly upset that the prize selection was lacking. I think he's too used to the Nickelcade at home where he is a ticket collecting machine. Soon it was time to walk home. Ben tried to get me to carry him, but I bribed him to walk home with a mini Milky Way bar I got with my tickets. Mwu-ha-ha-ha! I can't lose today! All in all, a pretty good day.
Posted by Steve Amstar

Apparently Women's Day is celebrated pretty much everywhere except for the US - at least that's what my MIL in Argentina told me yesterday when she wished me a happy 'Dia de la Mujer.' Oh, that and that it's based on an event that happened in the US. Go figure.

oh Jamie.. that picture of you and your precious baby is absolutly the best!! I love it!!
Great post.. sounds like a fun day in Kaz. land!!!

I keep sharing your news with people at Move! I just can't help it. I'm so happy for you, Jamie and Steve.

I am having a great time seeing pictures of the five of you together. :)

Sasha is a beauty! Jamie, I'll hope you'll bring her by Move when you get back. It would be so fun to meet her.