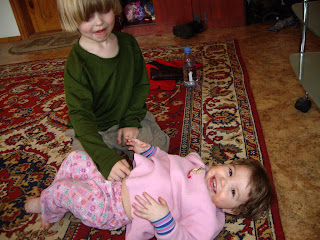 So this is what it feels like to have a family honeymoon. I keep having "pinch me" moments when things feel like they can't get any better. I mean here I was lying on the couch this morning with my beautiful Sasha in my arms when Ben, the family's entertainment center, crawled up to Sash and initiated his new game. It starts with him saying "Where is Sasha's smile?" and then he zurberts her tummy and then squeals "There it is!" as she erupts in peals of laughter and squirms. Seriously, life can't be cuter or more fun then right now. Sam keeps commenting on how great it is to not be at school right now, so I know he feels the same way. 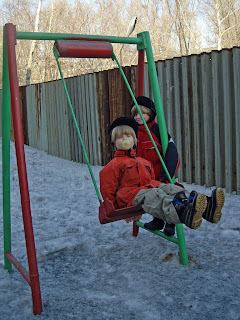 And of course there are also the moments that just aren't easy. Having two super active boys in a small one bedroom apartment for most of the day can wear thin on your nerves. Their favorite game is to jump from the windowsill to the couch and then "slide" down the couch cushions as fast as possible. Or throw their bouncy balls on the coffee table so it bounces just over the person sitting on the couch (usually me) hitting the thin wall behind their (my) head, making them (me) think that their (mine) head will explode from the loud bang behind them (still me) and causing them (moi) to overuse parentheses in his writing. Or go crazy. All work and no play makes Steve a dull boy. Luckily there is a swing outside to wear out some energy on.

The boys and I are finally overcoming our jetlag. I think Sam is starting to miss his though. We went walking outside the day after we arrived and he asked if the road was moving up or down or if it was just him. I explained that his wooziness was likely his body's response to not seeing the sun at the time it expected to. Yesterday when we went outside for a walk he said "I wish the road still moved on its own. That was so cool!" 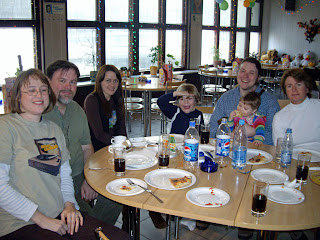 And last night I got to meet three other Americans that Jamie got to hang out with while I was away. They are here to adopt through our same agency and are about a month behind us in the process. We all went out for pizza at Mario's, the local pizza place (which Sam incredibly cutely calls "Mario's Pizza Palace"). First there is this nice couple named Chanda and Ben from Kansas. They are super nice and Chanda was even gracious enough to laugh at all of the boys' jokes that we've heard hundreds of times before. And then there is Jennifer, a boat captain from South Carolina who runs charters to fish and see dolphins. She made a comment about this being the furthest from saltwater she's ever been and that she might be getting land sick. Maybe some local sushi could fix that for her. No really, the sushi at the local restaurants was seriously good considering that we are roughly a thousand miles from the closest fish. We have been so blessed during our stay in Kaz with fantastic folks to hang out with! 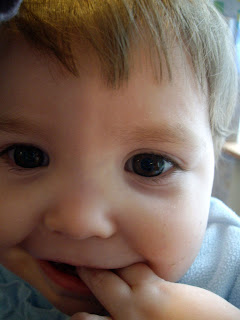 And of course Oxana came along because we couldn't have a get together without her. She was getting such a kick out of feeding Sash pizza. Every time she put the slice down, Sashka would sign "more" and Oxana said "I can't say no to something that cute!" Our daughter has world class skills at being so cute you just can't help but bend to her will. All boys in the Utah county area need to be warned of the impending danger coming their way in the next 15 years. Yikes, maybe I should say 10 years at her speed.
Posted by Steve Amstar

Wahoo! Kaz. looks like the perfect place to cuddle. We are so excited for you guys!

I gotta say that your children are bonding already - the looks on their faces say everything. You are creating a BEAUTIFUL family. Congrats!