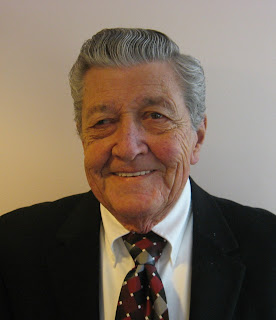 The five of us were blessed to spend the weekend in Virginia Beach for Poppoppop's memorial service. There were lots of fun times at the beach and reuniting with family - the weekend was bittersweet as these things always are, and probably should be. We all miss Poppoppop, and the celebration of his life can't be separated from the mourning of his death. As we saw in the tremendous turnout for his memorial service, he loved and was loved by so many people; we are grateful that his life is part of our heritage.

Here is a Poppoppop's obituary, it does a wonderful job summarizing my grandfather's eighty years:
Donald R. Reinhart VIRGINIA BEACH 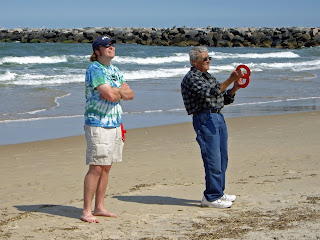 June 17, 2009 marks the day that this truly remarkable man lost his battle with cancer and transitioned to heaven. Don lived 80.5 fulfilling and happy years. He grew up in Pennsylvania and graduated from Penn State in 1951, majoring in chemical engineering. After marrying Jean E. Koch, he moved to Maryland and spent 43 years developing and selling industrial paint finishes. Don and Jean were happily married for 53 years before she passed away in 2005. Atlantic Shores in Virginia Beach became his home in 2006. Don was dedicated to the community and served on the board as a resident director. Last year he humbly received the honor of "Resident of the Year." Don took great pleasure in helping others. 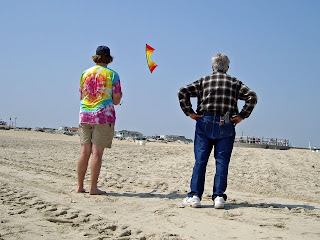 He celebrated life daily, maximized every moment, and enjoyed the beach and traveling. His passion was collecting and repairing antique clocks. Kite flying was an avid year-round pursuit. His nicknames included "Kite Man" and "Father Time." Don's fascination with the world along with his wit and wisdom will long be remembered. Many will cherish Don's memory including Donna Reinhart-Bourgelas (daughter) and her husband Tom; and Scott Reinhart (son) and his wife Marcia; grandchildren are Jamie Morningstar (and her husband Steve), and Ryan and Jake Cahill; great-grandchildren are Samuel, Benjamin and Alexandra Morningstar and Anthony Sands. Of special mention is Don's dear Friend, Louise Wilson.
Posted by Jstar

What a blessing. I'm so glad you were able to be there also.

That is a lovely obituary. He sounds like an absolutely wonderful man.

Jamie, I will never forget the first time I went to your grandfather's house and saw all of his clocks! He was a sweet man! I loved going to his house and going to the pool for the summer night movies, then falling asleep in the van on the way home! I am saddened by your loss, but thankful that you have so many cherished memories that will help you pass on his legacy to your children. Love ya, Laurie