There is simply no way to describe all of the wonders of our Saturday in a single blog post, so I will have to treat you to an entire week's worth of Summerfest blog entries. Yes, it was that magical. 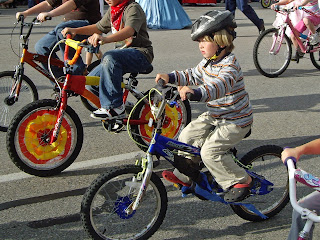 Ben did all of his own decorating, wrapping streamers all around his bike. They're a little hard to see in this picture because the blue and black streamers blended with his bike's coloring, but it was really a lovely effect in person. It said, "I am an independent five-year-old," as does his expression of intense concentration in this picture. It's hard work riding down Center Street in such a tight formation! 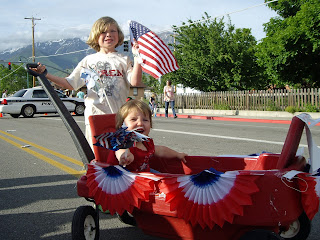 Sam was kind enough to pull his sister this year and we went with a patriotic theme for the trusty wagon. Coupled with Sam's new "Orem - America's nicest city" shirt, I found the combination of local and national pride inspirational. 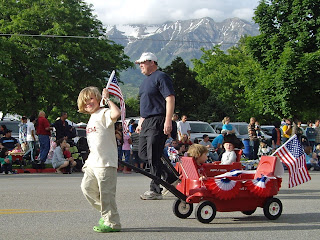 You're probably wondering, "where does one get an 'Orem - America's nicest city' t-shirt?" I don't blame you for asking, I'm a little jealous of it myself. The shirt was acquired Friday night when tiny t-shirt peddlers (always get the kids to do your selling!) offered Sam the civic-minded masterpiece for only $5. And how much did Sam have left over from his Summerfest savings? Exactly $5. It was kismet.
Posted by Jstar

I love the last photo. Such pride in Sam's face. It's wonderful to see. (Also love the grandiose mountains off in the distance.)