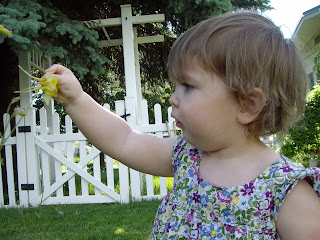 Sasha had her two-week update with the Cleft Palate Team up at Primary Children's today and we are proud to say that she's doing great on every metric! Her mouth is healing really well and she only has three sutures left to dissolve, so the plastic surgeon was really happy about that. Her audiology scans went well every indication is that her hearing is just fine now that she has ear tubes. She even made a "duh" sound for the speech therapist - the first time we've ever heard her make that sound!

This is all a great encouragement to us because, although we were pretty sure that everything was healing well, it's always good to hear it from the experts. I had this lingering back-of-the-mind fear that something would go wrong with the palate healing and that she would have to go in for surgery again. I knew, of course, that this was highly unlikely, but again it's good to get confirmation and affirmation.

The only slightly worrying news is that the orthodontist is concerned aboutSasha's lower jaw and there's potential she could need jaw surgery when she's 5 or 6 years old. We actually knew this was a possibility because Sasha's plastic surgeon advised us early on that she might have PRS - Pierre Robin Sequence. That's a sequence of birth defects that leads to a small lower jaw, a wide cleft, and a tongue that can ball up in the back of the mouth and cause airway problems. Fortunately, Sasha doesn't have any airway problems and if she does have PRS then it's a very mild case, so there's a good chance that her lower jaw will just eventually catch up and she'll be fine without surgery. Otherwise, we'll just cross that bridge when we come to it. 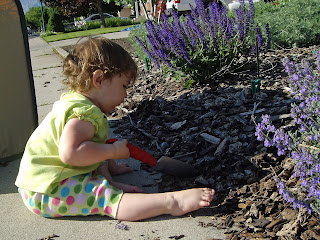 I have to say that I'm glad to have good old happy silly Sasha back... those first couple of weeks were really rough. I definitely wouldn't recommend having your palate reconstructed... unless you need it in which case I guess I would have to recommend the surgery :)

She was just mad about everything - eating, sleeping, not being allowed to pinch her brothers. And it wasn't normal two-year-old mad, it was pretty awful. But she's been totally off of painkillers for several days now and is doing great. She's eating and giggling and smiling again and pinching a little less frequently (ok, that part may be the natural two-year-old). It took about two weeks for her to sleep through the night again, but now she's sleeping like a champ. And as you can see she's even up for helping Mommy in the garden! Good thing, too, that mulch really needed to be rearranged with a trowel.

She's been making lots of new sounds, which is such a thrill, and over the past few days she's been babbling and mimicking up a storm! Every time she walks out to the car she chants, "uh un" (shotgun!) so she's already figuring out the major rules of life as a Morningstar. Her sounds get a little clearer every day and she has even started singing! There's a "yah yah yah" song that they used to sing at the baby house (it's the only one we can remember the words to :) and she now sings it exactly on pitch! It's one of those things that I never realized she wasn't doing, but now it's such a joy to hear.

Listening to your daughter sing for the first time is a pretty amazing experience.
Posted by Jstar

what wonderful news-and what a sweet sweet singing girl you have. :)

I'm so glad everything is getting back to normal and you have your sasssy happy girl back. :)

so glad it is all going well--it is such a roller coaster this parenting thing!! and medical stuff/adoption stuff just adds one more giant hill to the ride, but doesn't that extra hill just always make things a little more exciting??!!

Praise God our healer that all is well. What fun surprises with the singing and sounds. So glad to hear the good report! Karen

this is wonderful news :)

Hugs to you all!
Shannon & Sasha's cribmate, Katya Olivia

I am so glad that she is back to herself. I know you never had a doubt that she would heal up just fine. God is so good. He takes care of our kidos.