Summerfest - Only in Utah

We love our adopted home state, but even after living here for 8 years we occasionally have a, "wow, this place is really different" moment. 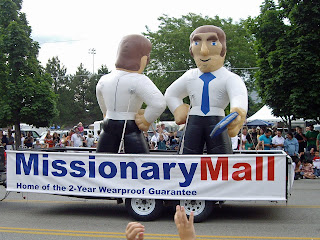 Steve and I enjoyed one such moment in the middle of the Summerfest parade after the Missionary Mall float passed by. The float was honestly pretty lame (Giant blow-up LDS missionaries on a trailer? Come on, you can do better than that!) and wasn't enough to turn our heads until Sam proudly displayed the freebies being tossed from the float. 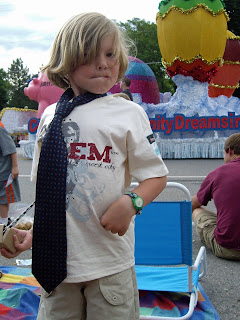 Yep, they were throwing ties! Wow.

You've got to admit, there aren't many places on earth where your eight-year-old can catch a necktie being tossed out as an advertisement in a community parade for a business specializing in attire for two-year missionary trips.
Posted by Jstar

Hysterical. What a place :)

You are so right - only in Utah. But I can't believe they had the sense of humor to go for it like that. I mean throwing ties to the crowd!?!?!