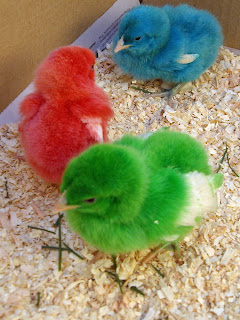 We are chicken owners once again! This evening we went to the farm supply place and picked up a new round of candy-colored chicks. Yes, the colors are absolutely horrific and there was no way we were going to be able to talk our children into naturally colored chickens, not when they were available in rainbow colors!

Long time followers of Morningstar Happenings will probably remember The Geralds from 2006. We have high hopes that this new round of chicks will make it to adulthood without mysteriously disappearing and that we'll actually be able to give them to our friend who has a farm in Spanish Fork. But, for the record, I still believe that the Geralds are living a full, free-range life somewhere in our neighborhood. Be free, Geralds, be free. 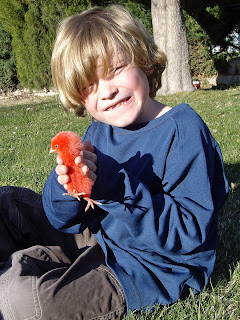 Sam was a total natural with his chick, which he promptly named "Lucky" because Calvin's red croquet ball was the lucky one and red is Sam's favorite color (no, I do not know what a croquet ball has to do with a baby chicken). Within minutes of getting Lucky home Sam was showing his chick the whole yard. I guess it makes sense that Sam took to Lucky so quickly since he was the main chicken wrangler when we had the Geralds, but I'm still surprised by their fast friendship since Sam tends to eschew anything mildly gross and, let's face it, chicks do poop. 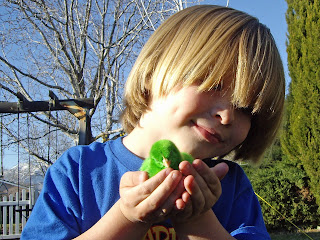 Ben took a little longer to get the hang of "safely" picking up his chick but eventually he figured out how to hold his chick without complaining about its feet scratching him and by the end of the evening they were happily going down the slide together. Ben's chick's full name is Slime Tree Morningstar. Classic. Slime Tree Morningstar - how can you read that and not smile?!? 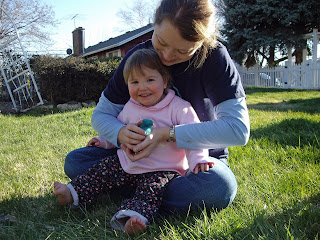 And Sasha is in heaven with her chick, Siniy (синий) which is Russian for "blue". Remember that she's obsessed with ducks, so having her very own fluffy squeaky thing to pet is basically the fulfillment of all of her hopes and dreams. We managed to make it through our first three hours of chick ownership with all chicks in-tact and accounted for, so I consider it a successful start. 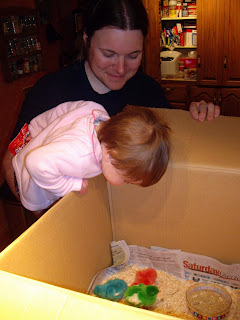 Sasha wasn't quite ready for the chicks to go to sleep - I think she would sleep in the box with them if we let her! She'll be quacking in bliss in her dreams tonight.
Posted by Jstar

Adorable!!! Those color choices were very wise...I'm sure it makes them easy to spot and makes for pretty pictures too! I can see how much your guys have grown by their creative name choices (okay, not that Gerald wasn't creative, just repetitive!) :)

Cute!!! I love the names and smiled throughout the post.

Love the names—both your chicks and your kiddos are absolutely adorable.

What a great idea for the kids.

Cute, cute, cute. Now I'm picturing Ellen with a baby chick and dying of the cuteness. How does one go about acquiring a friend with a farm?

I don't want to be morbid, but are you 100% sure that the relationship between a croquet ball and a baby chick in Sam's mind has nothing to do with the disappearance of the Geralds?

Wow, I have never seen colored chicks before. Cute