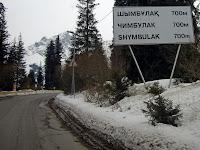 Okay, to correct an earlier blog post, there are three things that I went to Kazakhstan for: to adopt our beautiful new daughter Sasha, to drink a bowl of Kumis, and to ski at Chimbulak. The last one being important to me since teaching skiing has become my winter gig and saying that I’ve skied in a former Soviet republic just makes me giggly for some reason.

Chimbulak is located in the Zaiysky Alatau mountain range about 25km south of Almaty. It also goes by the name Shymbulak or Чимбулак in Russian and Шымбұлақ in Kazak. The facility was much more modern than I was expecting. There weren’t any detachable high speed chairs, but they did have those obnoxious “hump-me” turnstiles. 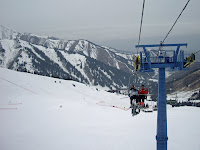 This ended up being a great thing because I only had to pay 600 tenge ($4) for each chair ride. The resort has about a 2000 foot vertical drop top to bottom, but I couldn’t make it to the top of the pass since that lift was closed. If you look at the map you’ll see that there was one main valley to ski in that has three chairlifts to take you all the way to the top. The trails are marked as beginner, confident, and professional. 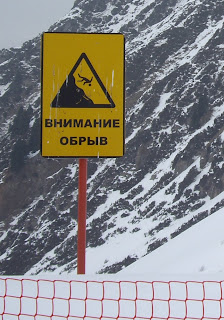 And I have to admit that I felt very confident on the blues and that I felt very professional on the blacks and that there wasn’t a heck of a lot that scared me while skiing despite the best efforts of the signage. I mean that sign makes it look like skiing past it will result in death. But I did find the powder slightly more challenging then I am used to. Hold on, wait, let me explain that part. I only fell because I borrowed my… just let me… ugh give me a second. 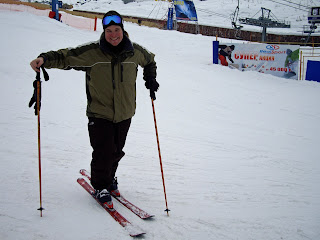 I was lucky in the fact that my driver, Dim (d-ee-m), was a skier and had brought his equipment along. I tried to talk him into skiing with me but he insisted that he would stay at the bottom and that I was to use his skis. His foot size was only a half size smaller than mine and his skis were 168s, just like mine at home. With my feet shoved into his boots, I was on my way. The snow was a consistency that I wasn’t used to. It wasn’t fluffy like Utah or Colorado, or hard packed and fast like East coast snow, but was fast and grippy. It was super easy to get both edges to track but almost impossible to skid on them unless you really tried to. The snow was three days old yet there were no icy patches but the coverage was thinner in some parts than you’d expect in mid season. 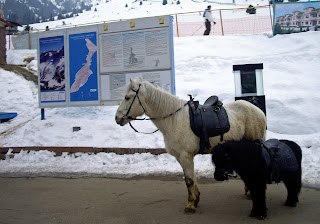 The skiers here were much better than I was expecting. They were pretty comparable to skiers in Utah: good form, fast turners, and not a whole lot of snowplowers coming down fast. It didn’t look like most of them were into powder skiing since most of the professional trails were full of untracked pow. And being a good Utah native I had to taste the local cuisine of freshies. The snow was mildly light and floaty. Lighter than Sierra cement, but no where close to as fluffy as the fly away Utah variety. I took about 10 to 15 turns and released out of both skis tumbling head over heels. Ack, ack! Snow down my back! Yeah, yeah, I should have stayed centered more in my skis to keep the tips from submarining on me but I DID have a cold going on at the time and horrible cough and stuffy head and I was totally exhausted and my feet are a little too wide for these borrowed Nordica boots. I just knew you’d understand if I explained better. 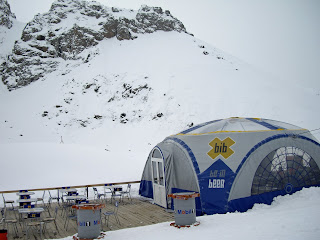 And I felt a whole lot better after visiting the yurt on the top of lift two. It was made out of some kind of clear tarp and technically isn’t a yurt, but it’s close. A shot of my favorite Russian vodka got me to forget about my small mishap in my technique and I enjoyed my final descent down to meet Dim and have a Latte. A little warmness did my throat a whole lot of good. 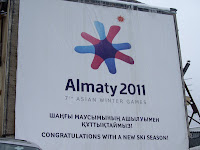 The whole reason this resort is so modern, Dim explained to me, was that Nursultan Nazarbaev, the President of Kazakhstan, is a big time skier. Since Kaz’s independence in 1991 Nazarbaev has been doing what he can to keep the roads in good shape and support the surrounding infrastructure around the resort. Almaty even made an unsuccessful bid for the 2014 Winter Olympic Games and is mounting another one for the 2018 games. They’ve secured the 2011 Asia Games and part of the prep for that is the installation of a gondola that will take people from below and cut out 25 minutes of switchback driving. 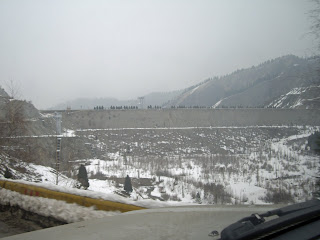 In the drive down the mountain I got a great view of the dam and the ice rink. The dam was made in the 60’s to prevent mudflows and landslides from destroying the city. Making large explosions in the mountains on either side created it. Many years ago there were mudslides that destroyed the entire city and so this stopped that from happening again. Not too long after it was completed, there was another slide and the dam (thing) showed that it was there for a good reason. For some reason there was a wedding couple standing on the top of it with their family all in tow with them. I’ll bet lots of people go here to get hitched because of the beautiful allegory of a dam being so much like love. Wait, that makes no sense. Fine, I guess they’re there for the view. 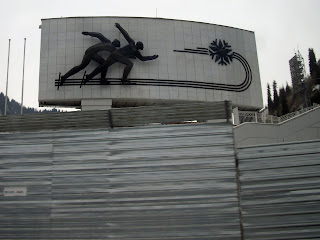 There is also an outdoor speed skating rink where many of the former Soviet Union athletes used to train. It looks like they are renovating at the moment since this is also where the gondola will start. The only thing I saw of the rink was the cool relief of two speed skater guys. 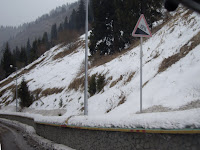 In the descent down the 12% graded road to Almaty it started snowing. I smelled a strange odor coming from the car and started sniffing to figure out what it was. “Wadka” my driver intoned at me while pointing ahead. “Oh vada” I replied pointing at the wet windshield. “No, vodka,” he enunciated back. Turns out that my driver and many people use a mix of cheap vodka and water as washer fluid. Guess that means there aren’t any open container laws here.

Back to the apartment for an exhausted nap and then on to the plane headed for home at 4:00am…
Posted by Steve Amstar

Glad you enjoyed yourself there! Learned something new - vodka & water for windshields... How funny!

BUT, I'm sure there are others wondering this too, did you ever find your wife a ski t-shirt? I think she could wear any shirt with Russian language on it and she could tell everyone back in the states whatever she wants.... no one will ever know the difference! :)

So I'm wondering...what were the ponies doing?

Sorry, no t-shirt for Jamie. They just weren't all that cool.

And I have no idea about the ponies. I posted the pic cause I thought it was funny that they were standing there by themselves.

Totally amazing place! I was going to ask you when you go to Almaty if you would be interested iin going to the 'mountains' and seeing teh ski area and the Asian Games site for '11. isn't it an amazing location?!?!?