Today during our lunch break we took a tour of the major churches of Karaganda, and it was really cool.

Our first stop was the Russian Orthodox church. It was amazing! The building was so majestic, and it was fun seeing those onion domes that I've only seen in photos. 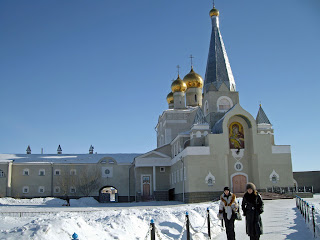 They just finished repainting or cleaning (we weren't sure which) the frescos in December and the whole place was just ablaze with color. 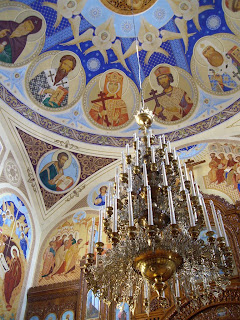 Next we visited the largest of Karaganda's mosques 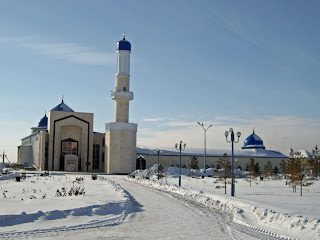 And we also saw the Greek Orthodox Church 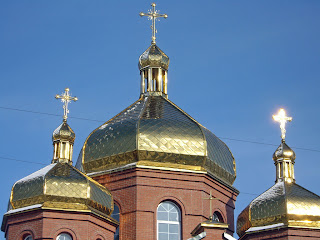 As we drove outside of Karaganda city center (most people live in apartments in the middle of the city), we tried to snap some photos of some of the more typical houses in the area. 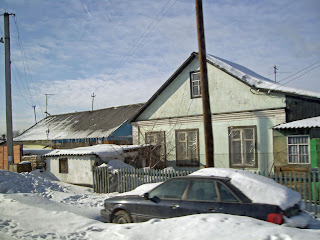 We're on dial-up, so that's all of the photos you're going to see for now :) We'll publish an album when we get home of all of our pictures! 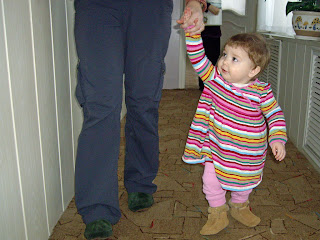 Since kiddos in the baby house only every wear socks (at least when they're indoors, and our daughter has only ever been indoors), we figured that shoes might be an interesting challenge that we should introduce sooner rather than later! We spent a good bit of time today putting the shoes on, taking them off, putting them on again, and taking test runs (walks, toddles, and falls) down the hallway. She did really well, far better than I expected for her first experience walking in shoes, especially since she's only been walking for two months!

Prayer request: We are so excited for Sam and Ben to come and join us in Kazakhstan! There are still lots of plans to make for their arrival (visas, plane tickets, and travel details about where and when they will be allowed to come) - please pray with us that they are able to come for the perfect amount of time. We would love for them to spend some time in Karaganda, but we know that it may not be possible/allowed. Please pray that their spirit of adventure is ready for the trip we've talked about for so many months and that the logistics of their trip and Steve's return are easy and smooth.
Posted by Jstar

Jamie and Steve!
I love following your adventure to get your daughter. I am praying for you all!

I have been following your blog for about a month. I have loved reading about your adventure. These pictures are SO gorgeous. (My son, 20 months, kept pointing and saying “castle.”) We are still putting our Dossier together for Kazakhstan. I am so excited for you all! Do you have a departure date yet?

Congratulations on your court date!! That's wonderful! I'm so excited for you all.

That is such an adorable photo! I love it!