It occurs to us that although you now know lots about the process of getting Sasha and the cuisine of Kazakhstan, we haven't told you very much about our little girl and her personality!

Sasha is a beautiful little girl (well, you know that from her photos!) and has all of the feistiness and spirit that you expect from a Morningstar. At first, with new people or situations she's a little shy. She likes to step back and just observe when something's unfamiliar and doesn't dive in and try to be the center of attention right away. Once she feels comfortable, she's very curious and likes to explore her new surroundings. She also gets talkative once she warms up, with a lot of babbling and even few words we can decipher. 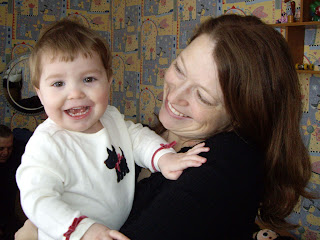 She loves cuddles and likes being held a lot. And she loves tickles! She knows what she wants - that girl is stubborn when things don't go the way she thinks they're supposed to! And those are the traits that have made her resilient, enduring more change and difficulty in less than two years than most of us have seen in two decades.

Sasha had some trouble eating early in her life and as a result was really tiny up until the recent past - we couldn't believe it when the doctor gave us her medical records and she only weighed 14 pounds in October (14 months old)! It's hard to know why she was so tiny - some of it may have been because of less-than-perfect nutrition at the baby house, maybe the pneumonia before arriving at the baby house that had her hospitalized as a baby, but it also probably had something to do with the more liquid baby food served in the younger groups because now that she is in a group with adult food, she's growing like a weed!

Sasha has a cleft palate. That means that the top of her mouth didn't fully form in the womb. Sasha's cleft is through the soft and hard parts of the palate - if you feel the roof of your mouth, you can feel that in the front it's hard and in the back it's soft. Her cleft is through both of those parts, but doesn't extend into her gums, which is awesome because it should mean fewer surgeries to correct the cleft and doesn't seem to affect her teeth. It also doesn't affect her lip, so we shouldn't have to worry about plastic surgery either. Basically, if you look at the top of her mouth (like when she's laughing and throws her had back), you see her teeth and gums and then up into her sinuses. Ok, that makes it sound gross... it just looks like the top of her mouth is missing. But if you look at her from the outside, she's a totally healthy, beautiful little girl!

Cleft palate is a pretty common birth defect, affecting around one in 600 births. There is a genetic component that makes a cleft more likely, and it can also be caused by prenatal exposure to drugs or alcohol or by maternal illness and the wrong time of the pregnancy. We'll never know what caused Sasha's cleft, but the good news is that clefts are very easily correctable through surgery. We've already been in contact with our pediatrician in Utah, and we'll go in for an appointment the first week we're back and then she'll start talking with the cranial-facial doctors up at Primary Children's Hospital in Salt Lake. 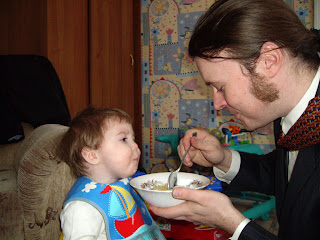 Short-term, we're really just looking at feeding and speech difficulties. The cleft means that Sasha has some trouble moving food around her mouth, so sometimes she needs to tilt or shake her head to get the food in the right place and sometimes the food comes out of her nose (which is still a ton less gross than baby spit up). She also needs a little extra time to eat, which is a hard thing to do in the baby house but easy when you have a family of your own! It also means that there are some sounds her mouth simply can't make, so we've focused on the sign language even more than we had anticipated so that her mouth isn't a barrier to her communication.

As we prepared for adoption, Steve and I grew more and more open to a special needs adoption. We knew that there are a lot of kids out there with conditions that, if they had been born in the States, would be no big deal, but because of those kids' circumstances may never get corrected. Over time (maybe that's why we had to wait so long for Sasha!) our hearts grew more and more ready for a kid who might have a few more hurdles to cross than your average bear.

This journey is full of surprises! A year ago we imagined that since we were open to any ethnicity and a girl up to 48 months, we would come home with a little Kazakh preschooler. And now here we are, halfway across the world, with a toddler who looks like she could have been born to us! Adoption has been an extraordinary adventure, and it's hard to believe that it's really all just beginning, that our life as a family of five is just at its start. A year from now, paperwork and court dates will be a distant memory and we'll be consumed with the day to day business (joys and trials!) of being a family. Wow. Sasha, we are so blessed to call you our daughter.

Prayer request: Please join us in prayer for our little girl. Pray that she will grow up with an intrinsic knowledge of the beauty and strength of her identity as a daughter of God and will come to accept his incredible gift of grace at an early age and every day after.
Posted by Jstar

Oh man guys, you really know how to turn on the water works over here. (We're also seriously praying about SN for our China adoption, so all this hits home, and is very real.)

Sasha is so beautiful. I know I've said it before, but she just sparkles. It's so hard to believe she was just 14 pounds in October. She appears in the pictures to be petite in stature, but her cheeks and hands have her fair share of adorable baby pudge. I would never have guessed she was once so tiny.

Thank you for sharing All about Sasha. You guys are such a blessing to all who read your blog- I know you are to me!

Great post! You are an incredible writer and we will continue to pray!

Sasha is one lucky little girl—you are the perfect parents for her. She's a beautiful little girl and you'll provide her with the medical care she needs to grow into a beautiful young lady. God bless you both.

Sascha was one of my favs at the baby house:)

Somehow it feels very reasurring and "normal" that you aren't too worried about her cleft palate. Good to know you have access to premiere health care back home.

I am so so happy for your family. What an amazing journey for you all, and what a blessing for that little girl to be welcomed into your hearts. She is absolutely beautiful. Many congratulations to you all
Much love
Amy

You have a beautiful little girl, and she is a lucky one at that. I am very happy for you.

I am just catching up after a brief hiatus and I am overjoyed to see your beautiful Sasha. And isn't it amazing. She is through and through a Morningstar. WOW.

LOVED the skiing stories too.