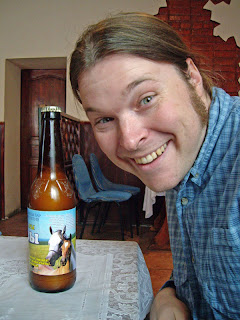 Here's another entry to add to the culinary experience file. There are two things that I came to Kazakhstan for. To adopt our daughter, and to try kumis. Kumis is a local drink that is made by fermenting mare's milk. Neigh. It's mildly alcoholic (only 3% alcohol content) but not enough to get you too giddy. Well, I suppose if you drank enough of it.

We saw bottles of it in the grocery store, but Oxana said it isn't as good as what we could find else where. She claimed that the restaurant across the street would have the best we could easily find. The only way to get real good kumis this time of year would be to drive out to a place in the steppe (boondocks) and it would take too long. We decided it'd be better to try out the restaurant. Then she mentioned it's a place that they don't usually take tourists. Ok, now we're interested.

The restaurant we were going to was pretty hometown. Locals eat there often and there really isn't much on the menu that we would be familiar with. Think Callies Café (for you Utahns) or Harry's Lunch (Westminster-ites) or Mel's Diner (kiss my grits!) This meant that we HAD to go now. We aren't the type who'd pass up a great cultural experience like this. 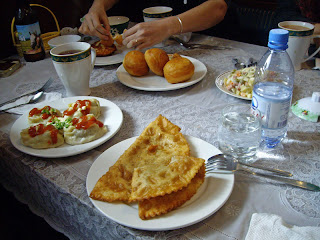 The inside was nice but very cold. No one must want the heat on I guess. No English menus (surprise) but Natasha (our coordinator) and Oxana both joined us. So Jamie ordered some perogie like thingys and I got two of these large pastries filled with a meat, cabbage, and onion mixture, kind of like a greasy calzone. We ordered our kumis and waited patiently for our meal.

Our server returned and plunked a bottle on the table. It was just like the one at the grocery store! Well, we were in this far and there was no turning back now. We poured our bowls and readied ourselves to taste. Smell the bouquet, swirl to examine color, and take a tasting sip...

The smell reminded me of flowers on the roadside (when I was a kid I believe we referred to them as "skunk plants") and the color was a pleasant mother of pearl oyster white (great, now I'm thinking of seafood, that's a great sign). The first sip descended quite easily without trying to come back out, so I decided it was safe to take another. It rolled along the tongue in a pleasant and leisurely manner that allowed its full flavor to unveil itself. Quaffable... maybe a little young. 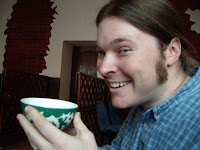 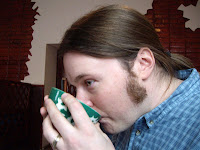 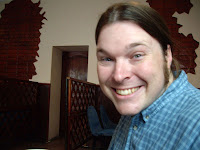 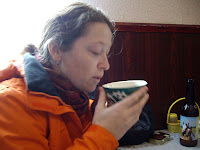 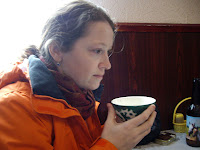 And really, it wasn't as bad as I thought it might be. It was like a runny sour yogurt soup with a just a smackering of buzzy fizzy to it. It wasn't nasty salty like the other stuff I tried (eww) and kind of had a pleasant finish to it. Texture wise it wasn't chunky like I expected it be, but rather smooth and mellow. It went well with my meat turnover (beef, maybe? Maybe not) but, I doubt I'll be bringing home any bottles to share with anyone. Jamie said she liked it too, but I think she preferred her cup of tea. 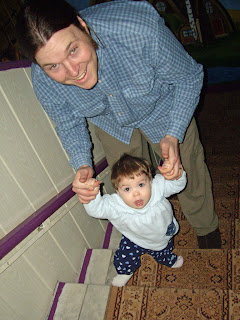 Jamie: Today we combined two new experiences for Sasha- stair climbing and shoes. Yeah, we like to live large. She's doing really well in her little boots and has gotten over her initially wobbliness. She climbed all 11 stairs three times today while holding our hands for stability - I bet that girl's going to sleep well tonight.

Prayer request: It's time to practice those court speeches! Our speeches have been written for about a week, but now it's time to get serious about memorizing them and being ready to present about ourselves in court. I know it sounds silly given all of the other big stuff going on, but please pray with us that we will be able to memorize our speeches and present about ourselves and our family in a compelling way.
Posted by Steve Amstar

Well I will have to say that I feel like I have already tasted many of the things I was curious about. Your descriptions are so vivid! I feel like I am there! We are praying for court!