Today was Sunday again, so we only had one visit with our little girl, our morning visit. 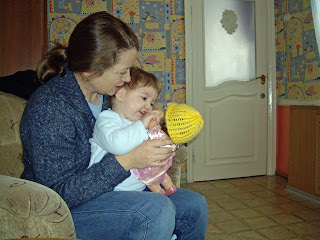 Now that we've gotten to know Sasha, we thought we'd let you know what we've decided about her name. You'll remember that long before we knew our daughter, we decided that if it was possible we would like to keep her birth name, especially if it was the name that her birth mother gave her. We really want to honor her birth culture and keep it as alive for her as much as we can, and her name is a really great way to connect her to both of her families - the one she was born into and the one she was adopted into!

It turns out that her first name is beautiful, pronounceable by American tongues, and was given to her by her birth mother, so Alexandra it is!

And for her middle name, we have decided on Grace. We can think of no name that better encapsulates this adoption journey than grace - a free gift, a gift that we could never, ever deserve. The lavish love of the Father of the Heavenly Lights (James 1:17). Grace. 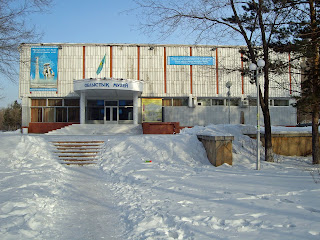 Since we had more free time than usual today, so we decided to head to the local history museum. It had all of the flair of your normal small city museum (dioramas, photos of visiting dignitaries, examples of local products, local costumes) and was a really nice way to pass an hour. They had a lot of labels in English, so we were even able to follow along with many of the exhibits!

After that we walked along the main road and snapped photos of the most important sculptures. This one is, of course, Lenin: 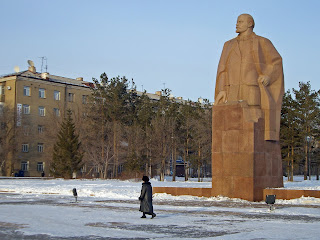 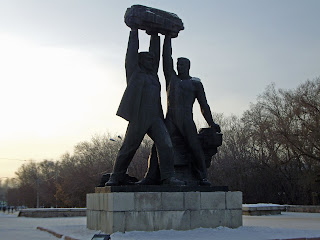 And these guys are two coal miners lifting a really big hunk of coal. Karaganda comes from the Kazakh for "black" and the city exists thanks to the coal deposits in the area, so coal is a very important part of life here. 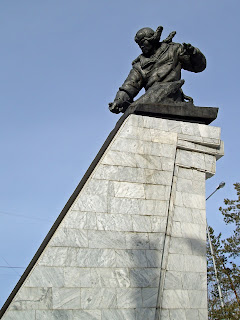 This is a statue of a local hero. Nurken Abdirov was a World War II pilot whose plane was damaged by enemy fire above Stalangrad in 1943. Instead of trying to land safely, he and his gunner decided to fly their airplane into the German line, posthumously earning the title of Hero of the Soviet Union.

Here's a pretty view on the way to the history museum: 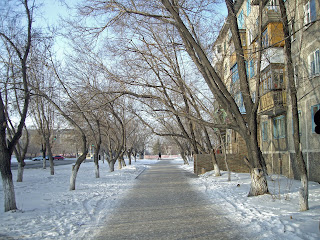 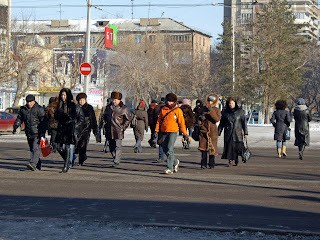 And here's a classic photo of the American "blending in" to the local surroundings! We keep joking with our interpreter that now that we have fur hats we look just like the locals. She has trouble stifling her hysterics as she "agrees" with us.

Prayer request: Please pray with us today that our little girl comes to understand the full meaning of her middle name - that she is simply amazed by the free gift of grace that God has lavished on her. Pray that she accepts and treasures this gift that could never be earned or attained, grateful that she has been made worthy and precious and unbelievably lovely by the love of her Creator.
Posted by Jstar

Great pictures! LOL on the last one. Too funny.

From the mom of a Kazak cutie from Almaty....Madina Grace...I must say that I love your choice of a middle name and look forward to the unveiling of her first name!
Quaintance