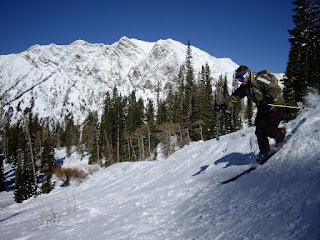 It's been less than five months since our 2007-2008 ski season ended, and the 2008-2009 season began today for Steve and me! And it was glorious. Sure, there were still "early season conditions" (rocks and ice) and Steve can barely crawl up the steps this evening (this is why some people actually do preseason training... which we always think is a great idea but just seems like too much gosh darn work), but it was a day with the man I love in the amazing Wasatch mountains under bluebird skies enjoying 2-for-1 tickets and laughing hysterically as the other one rolled down the hill (I was doing most of the laughing, incidentally). 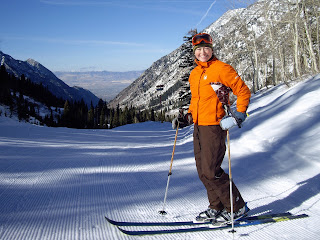 It felt great to use our ski legs again, and we also got the photo for another page in Sestra's ABC book - M is for Mommy in the Mountains!
Posted by Jstar

The Mommy in the Mountains picture is magnificent!

Oh, I'm so envious! Can't wait to get our annual ski trip planned. Enjoy the snow!