Another Olympics Rolls Around 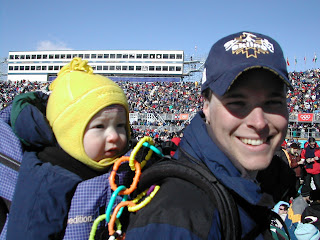 Can you believe that it's already time to start thinking about the 2010 Olympics?!? In case you didn't know, we're total Winter Olympics fans - we moved out to Utah the summer before the 2002 Olympics and after experiencing the Salt Lake Games we were hooked! (the photo is of our sweet little one-year-old Sam at his first games!) 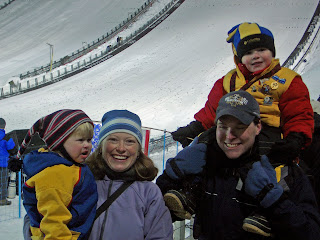 After having such a great time in Salt Lake we had to go out to Italy for the 2006 Torino games and again we had a wonderful trip, this time accompanied by all four grandparents!

And now ticket purchasing time for the 2010 games is upon us. Since the Olympics are relatively close to us (Vancouver, BC) Steve decided that we should go big. So far we've entered the lottery for Snowboard Halfpipe (after seeing Shaun White win gold Sam declared that we had to see snowboard halfpipe again), Short Track Speed Skating, and (dum da da dum) the Opening Ceremonies! Of course, there's no guarantee that we'll get tickets to these events and I'm sure we'll have much more purchasing to do once tickets officially go on sale (this is just the pre-sale lottery for the most popular events). But it's awfully fun to start planning another Olympic adventure - this time for 5!
Posted by Jstar

That is FUN! What a great family vaca!!

That will put you up near me. We'll have to plan either a train trip down or train trip up from Seattle to BC and visit while you're in the area.