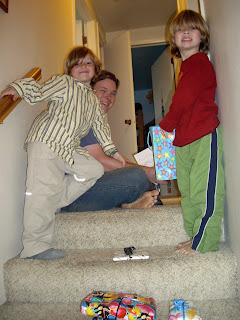 Yesterday was Steve's 31st birthday. Happy Birthday Darling! We started his birthday in the traditional way - presents of course! Ben and Sam each picked out chocolate treats for Daddy and I got him an Astana Cycling Team t-shirt (that's the Kaz cycling team that Lance Armstrong just joined) and an ear band for skiing that has a hole in the back for his ponytail (it's not quite as effeminate as it sounds). Steve's long hair has opened up worlds of complexity that for the first decade of our marriage only I had to endure - split ends, the need for conditioner, finding the perfect ponytail holder, and now ear bands that ride up because of your ponytail. His recent hair trials have brought us closer together, though - when the going gets tough and all that. 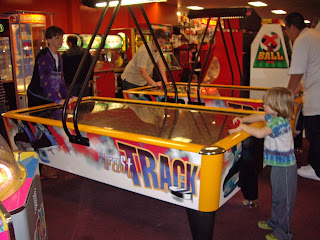 After Gramma and Poppop got home from a day of skiing at Solitude and I picked Grammy up from the airport, we hit Marley's for birthday dinner (that's the restaurant local Harley Davidson dealership - they make our favorite burgers and fries) and then spent a very enjoyable evening at the Nickelcade. No umbrella hats this time, though, Sam and Ben invested their hard earned tickets on foam gliders, giant banana Laffy Taffy, bouncy balls, and Tootsie Rolls. 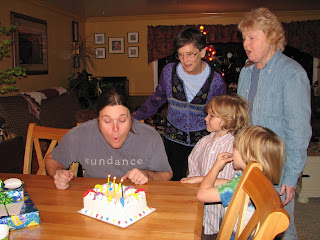