Halloween with the Transformers 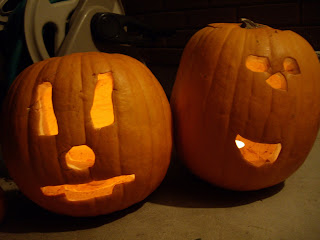 We had quite the Halloween this year - it seems like Halloween becomes more of a production in our home every year! I blame Steve - as the kids get older and he can make cooler (cooler means more mechanized, BTW) costumes and you know Steve's penchant for gears and wires! 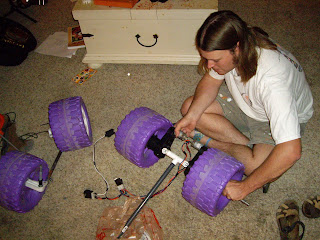 The boys wanted to be Transformers this year, and that didn't mean buying an Optimus Prime costume at Target, no way, that would be ridiculously easy and clearly not the Morningstar way. No, that meant taking the ingredients: Rock Band World Tour boxes and packing material, the hand-me-down Power Wheels car that's been sitting in our shed, the old ceiling fan from the boys' room, PVC, and lots of gaffer's tape and spray paint and making transforming robot-to-vehicle costumes. 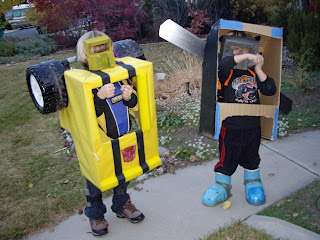 And I have to say that Steve really outdid himself! He was a little disappointed that the costumes were, and I quote, "not complicated enough," but other than that I declare that Halloween was a complete success. I shudder to think of what "more complicated" would look like, besides the helicopter tail that we wanted to put on but that Ben would have none of. Steve has a different standard than most of the rest of the world for the desired level of complication for any given project.

We had a great Halloween - the boys collected more candy than any small children should ever eat, Ben managed not to concuss any of our friends' children with his fan blades, the evening was warm and pleasant, Steve got the fog machine going for the trick-or-treaters, and we were pleasantly surprised to find that our festive bottle of Vampire pinot noir was really quite tasty.

And tonight we get an extra hour of sleep. Glorious, beautiful, extra bonus sleep. 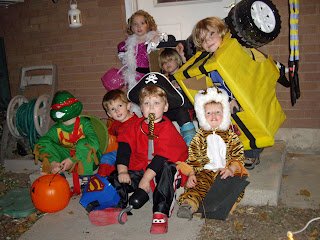 And to think all I did was go to WalMart about 4 hours before we went trick-or-treating in hopes that there would be SOMETHING on the shelf.

WOW! I especially liked when the transformers stopped fighting because their costumes were too heavy!!!

I bet the boys were the talk of the neighborhood. I love that Steve thinks they were not "complicated" enough, that cracks me up! Apparently he wanted to truly physically figure a way to have the boys morph into stuff! :) And by the way, Ben where's the umbrella hat??? Come on, every transformers has one of those :)

That is SO cool... I should up load what my husband did!!! Not so much work went in to it, but funny!! I am so amazed at those transformers... WOW!!!!

I just showed the videos to my class - they decided that Sam is smarter than they are!! The "place my feet on solid ground" comment was a real hit. The scary thing is that I used to narrate things just like that when I was his age!

It's a good thing I will do not have to compete with the Morningstars in doing Halloweenie costumes for my son/daughther. Those are great! Just want to let you know that since our dossiers are about two weeks apart, mine was released from MFA to the Ministry of Education this week. I assume yours will follow. the MOE said we should expect a region referral shortly with travel in Feb/Mar. Finally movement!!! Good Luck!

WOW! Great Costumes! Can I buy bumblebee from you for next year? LOL Steven would fit into it very nicely I am sure! Even though he and Sam are the same age!

~Terena
PS I am only kind of kidding about buying the costume! :)