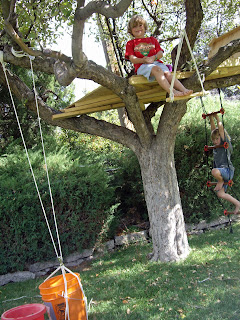 I know that I shouldn't be quite so amused while writing this, but I think we have made the stupidest/coolest treehouse addition ever - the counterweighted down elevator! Yep, it's what you get when you combine some rope, a bag of rocks, pulleys, and a quiet Sunday afternoon in the Morningstar home.

Here's a photo of elevator mach 1 - this was when we had the pulleys reversed, requiring roughly 60 lbs of rocks in a bucket for the boys to descend. Man was that exciting when you let go of the wooden bar and the bucket came plummeting to earth! 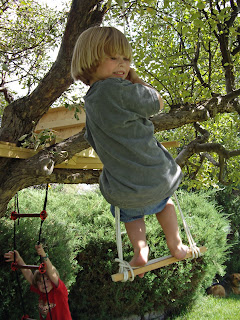 Eventually we figured out the problem and now we only need 15 lbs of rocks to counterweight the boys. At first we tried it with a plastic planter holding the rocks, but the first time Ben released it the plummeting resulted in a seriously shattered planter, so we decided on a softer rock container. Don't get me wrong, that baby will still really hurt when somebody gets wonked with the bag o' rocks (and let's be honest, it's not if, it's when). We have considered roping off the square foot of lawn in the drop zone - eventually we'll probably figure out some sort of spinner to slow the fall, but for now it's really just a "stand there at your own risk" area.

Ben loves the elevator, but Sam's not so sure about it. He hated the rope ladder at first, too, and now he's a champ, so I'm hoping he warms up to it. I was trying to figure out where we went wrong with Sam and then Steve pointed out that having one child with a will to survive probably doesn't represent a failure on our part as parents. I had to admit that he has a point.

Here's a quick video of the elevator in action - enjoy!

Not only do I not have sons, I don't have a big enough tree. Oh well. I'm afraid of heights. The elevator is sure smokin'.

I love the elevator!!!

Just wait until your girl is home & trying to keep up with the boys. Of course, as soon as she can talk she will be telling them how to do whatever task is at hand. It is going to be interesting!!!!!!

Hey, there's nothing wrong with Sam - he just takes after his godmother! Someone has to worry about safety when I'm not there! :)

Too cool! This doesn't look at all dangerous.....

Now, you need to rig it so they can take the elevator up to the top :-)