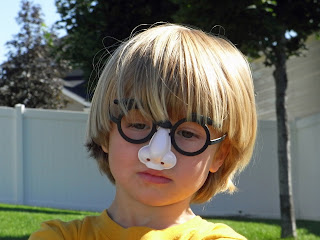 I couldn't help but post a few crazy photos of our kiddos. Here's Ben at Cody's birthday party - wearing the same glasses as the Lego guys in Lego Star Wars wear when you turn on their disguises (having a pair of real glasses like the Lego disguise glasses is sheer joy to Ben, as you can well imagine). I think he looks quite dapper.

My latest Hilarious Ben moment came last Friday when I asked Ben what happened at school that day. Usually on Fridays they do a lot with music, so I asked him if the fiddler came again. He no, the fiddler didn't come, just a girl who played violin. Then he proceeded to tell me that he got to play a new instrument - "you know, like monkeys play in movies!" It took me a second to realize that he was talking about playing cymbals. You know, like monkeys play in movies :) 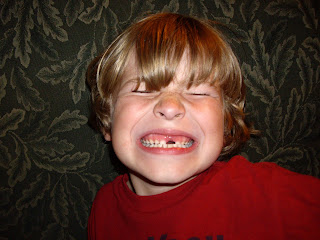 Sam's big event this week is the loss of not one, but two teeth! This is quite the blessing because they've been loose for roughly forever and very annoying to Sam, thus making them very annoying to everybody else as well. Three baby teeth gone, a zillion to go.
Posted by Jstar

I love Ben's new instrument story. I'm sure it was *beautiful* music.....