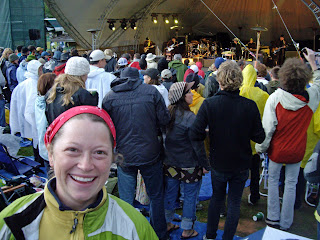 They were serious when they printed "rain or shine" on our Bob Dylan tickets! But we love our Bobby more than we love our health or comfort and we came prepared Sunday for the long haul. We arrived at Deer Valley at 3:30 and were well-rewarded for our wait in line - Steve got the best seats! Here's a great shot of how close we were to the man, the legend (he's the one who looks like General Custer in the white hat and black suit with gold military stripes down the leg. When you're that famous, I guess you can get away with any outfit). Ok, so my hair leaves a little to be desired in this photo, but at this point in the evening we were well beyond worrying about appearances. 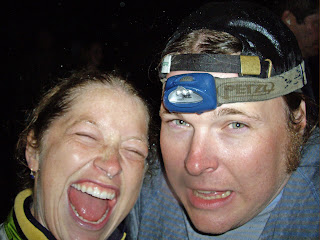 The rain didn't start in earnest until after we entered the gates at 6:30. And man did it rain... and thunder... and hail... but we were committed to the cause. I have to smile at the appropriateness of the "Thunder on the Mountain" shirt that I purchased at the concert. We actually had a nice break in the storm for most of Dylan's performance, but as you see from this photo we were pretty soaked by the end. Fortunately, there was plenty of fantastic music to dance to - I think we danced more to stave off the frostbite than anything else but, hey, whatever works! 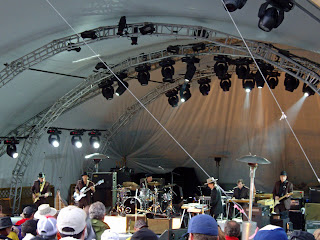 It was a nice mix of classic and newer songs, most of which stayed pretty driving (a good thing - it was easier to dance our way to warmth with a rock beat). Interestingly, Bob exclusively played keys, which was a little sad since the keyboard is so much less cool than the guitar (that was for you, Rich), but let's face it, Bob plays all instruments with a style all his own. Plus it was fun watching him play harmonica and organ at the same time.

We've been to enough Dylan concerts to know that there are good Dylan concerts and there are bad Dylan concerts (this was number six in our repertoire - not bad!). We are pleased to report that Bob's concert at Deer Valley rates in the first group. And we haven't contracted pneumonia... yet. There was a chance of it at the end of the concert, but he encored with Like a Rolling Stone and the sheer joy of it all kept us going. Here's a link to the Salt Lake Tribune's coverage of the concert with the full set list. It's a pretty good write up except - hey! - they stole my opening line from this blog posting for their story!
Posted by Jstar

E-mail me for an invite to ours

We are in our 17th week trying to get our dossier through the DC Embassy. Can't believe how long this process is taking!

Yep I am still jealous. Glad you had a good time. We were in Midway and it was quite rainy there as well. I think we had the wettest BBQ ever, but at least we could enjoy it from inside the cabin.

Glad you had a blast.

While the guitar may have been cooler before, I'd say that Bob, with his choice of instrument for the concert, has caused the keys to now surpass the guitar. I am vindicated. ~R

I made fun of Dylan in a letter to the editor (USA Today) once...