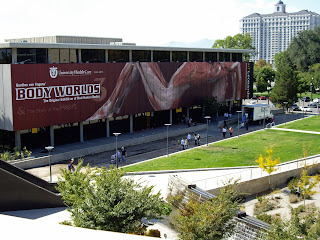 This weekend we went up to Salt Lake to see the Body Worlds exhibit. I've been wanting to go for years, and I'm so glad that the tour finally came to Utah. I have to say that it was everything I had expected and hoped that it would be - slightly creepy and totally enthralling.

It took us a full 90 minutes to see the whole exhibit and the boys were riveted for most of it (and, to be honest, I was getting hungry and tired towards the end of it, so I could hardly blame them for being done as well). We purchased audio tours for them and they really enjoyed listening to the details of each piece. And they seemed to adjust pretty quickly to the cadaver concept - we only had to answer the, "These were real people?!?" question a couple of times each before they started to take it for granted. We did find it important, however, to stress that the people were dead before their bodies were prepared for the exhibit and that clarification seemed to set the boys' minds at ease.

Sam was especially interested in the cross-sections of lungs with emphysema, since my grandfather was just diagnosed and so he now has a personal connection to the disease. It was quite the learning excursion for all of us and I think we each left with a new respect for the miracle of the human body. 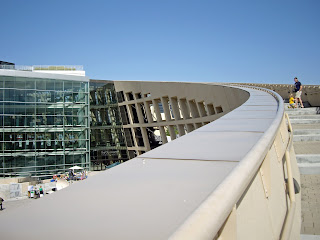 After Body Worlds and lunch, we took the chance to hang out in the Salt Lake library again. That is such an amazing facility! We had a little incident where Mommy got lost and spent the better part of an hour searching for the rest of her family while said family enjoyed perusing books in the super cool children's reading nooks... but we were reunited in the end and I learned the important lesson to look in the coolest section of the library first. Either that, or just make sure that Steve isn't carrying both cell phones. I know, it all seems so obvious in retrospect. I'll learn someday!
Posted by Jstar

I am Lisa. My husband and I got to MOFA Aug. 11. To an extent, we are about even. If you are interested, perhaps we can keep tabs on each others' process. At best at least we can commiserate the slow whhels of Kaz. We live in OH.--Good luck!

I thought about going to that exhibit.. for like a second... I just could not imagine seeing real bodies with no skin... ewwww...

Glad you got to see the exhibit! Bond trivia...did you notice that Body Worlds is in the background in one of the scenes in Casino Royale? Cool, eh?