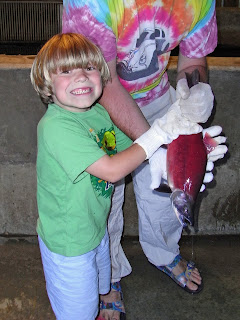 On Saturday, we had the unique chance to go up to the fish traps at a local reservoir and help a friend sort salmon! Ok, I'm guessing that we probably provided more entertainment than actual help, but we all had a really wonderful day at the fish traps.

The process is really very interesting. The salmon start life in the reservoir tributary that the fish traps are located on. They hatch and swim downstream and live in the lake for 5 years(ish) and then when it's time for them to spawn and die, they swim back upstream to the traps (just fish holding pens that the fish aren't smart enough to find their way out of) where they are sorted by gender and measured and checked out for diseases and then the eggs/sperm are harvested and sold to local hatcheries. A portion of the fertilized eggs stay at the reservoir and the cycle starts again. Right now they're trapping around 400 salmon per day and they'll get around 7 thousand this season! That's a lot of fish. And get this - each female produces around 10,000 eggs, and in a hatchery they get about a 75% survival rate. Woah. That's enough salmon to keep us basting and grilling for a long time. 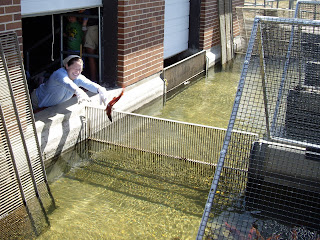 Sorting the fish was really cool - I was so surprised by how strong those angry, flopping fish were when we held them up. Obviously, we are not well acquainted with sportfish or however salmon-type fish are generally described (admittedly, our general ignorance abounds on the subject of any fish not in Finding Nemo or in our fishtanks) so the day was filled with learning and surprises.

Ben loved watching the salmon swim upstream into the trap, but his interest only extended as far as watching from a safe and dry distance as the others held the salmon. Oh well, I guess I can't blame him. As you can see, Sam did work up his nerve to get close enough to help Daddy hold a salmon. Given our love for fishing, it's probably as close as he's going to get to catching an edible fish for at least a decade. At least, I'm hoping that's the case. 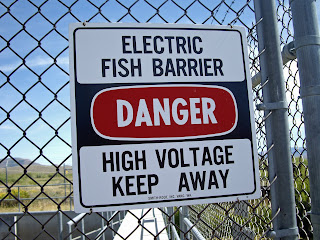 I'll leave you with my favorite photo of the whole day - now that's a sign you don't see every day!
Posted by Jstar