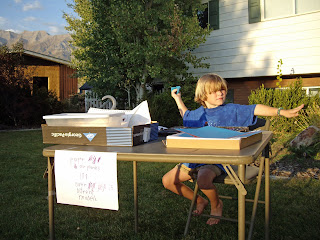 Thanks to an increased allowance, Sam has discovered that it's really fun to have your own money and spend it how you want - we have created a monster! He is now selling paper airplanes to anybody with a spare dime - it's hard to read the sign in this picture, but it says "paper airplanes 10¢ over 100 50 15 difrent models." Here he's showing off the "supersonic," one of his favorites.

I have to say, it's been great giving the boys enough money that they can actually save it up and buy stuff that is important to them. For example, they combined savings to buy Lego Batman for the Xbox 360 last week, and Ben used his own money to buy several books from his class's book order form. They pay for their own field trips and treats, like Slurpees or donuts. It's stuff that we probably would have purchased anyway, so we're not spending any more than we normally would have, and it's been great watching them learn that there are trade offs for every purchase.

And if anybody needs a paper airplane, you know who to call.
Posted by Jstar

So, how much did he make?

Sam: "Two bucks including Poppop" (apparently Poppop placed a pre-order for his visit in November)