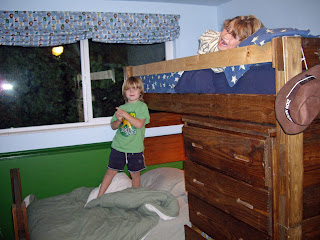 We've been talking about it for a long time and today we actually did it - the boys are sharing a room! I was a little concerned that there might be drama, since this is basically the fruition of all of Ben's hopes and dreams (he's the social one, in case you haven't noticed) and I expected Sam to be not nearly as enthusiastic, but everybody's handling the transition in stride. Sam took the top bunk, so that deal-sweetener definitely didn't hurt.

It was important to us for the boys to combine spaces well before we leave to meet Sestra. Mostly this is because we anticipate that there will be a "transition period" (and for brothers, I believe that this is always code for "violent period") as they learn to share space, and we wanted to have as many of the kinks worked out as possible before we add the additional complication of learning to be a party of five! Plus, now we can take our time getting Sestra's room ready without having to worry about disturbing Sam's sleeping quarters.

We still have a little clean up to do (rearrange the closet, add a reading light for Sam, modify the ceiling fan so that it won't decapitate him), but the beds are set up and clothes are moved, so the bulk of the work is done. This is definitely all because of Steve - I am only marginally more useful today than a pat of butter (don't ask me why, but that was the first image that came to mind). The boys were sick towards the end of the week and I think that I'm battling whatever they had because I woke up at 10, took another nap during Meet the Robinsons (I love that movie!), and spent most of the rest of the day standing around with the vague notion that I was supposed to be doing something but couldn't quite line up the synapses to remember what that thing was. 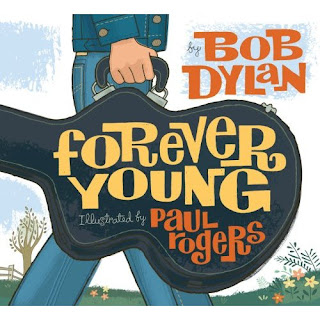 I did, however, find a new bedtime story today. I had $5 in Borders Bucks and a 20% off coupon burning a hole in my pocket, so I went over to our local Borders (spending most of the time standing around with the vague notion that I was supposed to be doing something - do you detect a theme?) and found this gem - an illustrated version of Forever Young. The lyrics to one of my favorite songs of all time, compiled in a children's book, illustrated with pictures depicting Bobby's life and legacy. Yeah, it's one that should grace every child's bookshelf.
Posted by Jstar

So sorry you are not feeling well... Hope you are over it real quick so you can start on the babys room!

I am praying for a great and steady transition for you witht the boys in the same room. We put the girls in the same room a while back, but right now Savannah, the older, is sleeping in the babys room. We will have to force her out pretty soon. (She is our one who also needs space)

We totally agree with your assessment of Meet The Robinsons. Highly underrated movie...we LOVE it!

Oh, and congrats to Sam & Ben on the Bunk Bed co-habitation extravaganza! Big fun for all!!