It's been a big video game week here in Morningstarland. Both Force Unleashed and Rock Band 2 were released and with a stay-at-home dad and two boys in the house, you know that's a recipe for a whole lotta excitement. 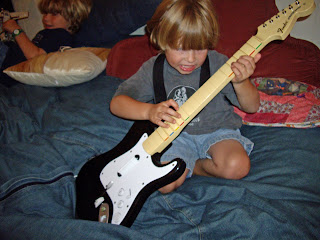 Most of Sunday (after the cross planting, of course) was spent with various friends stopping by to enjoy the just- procured Rock Band 2. I have to say that I'm a fan - the new "no fail" mode is so much fun because Sam and Ben can actually play along with us! So far Ben's record is 53% playing bass on Eye of the Tiger... it's his favorite song (really, who can resist that theme?!?). 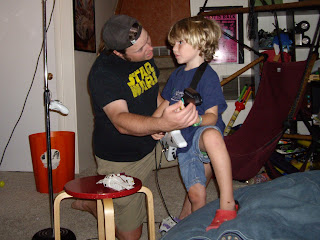 Sam takes his guitar even more seriously than Ben does. Here's a nice photo of Steve coaching his young boy to follow in his expert-level footsteps. Touching, I know. But vocals are really Sam's forte (no pun intended). We just had to end our jam session tonight with Blitzkrieg Bop from the old Rock Band so that Sam could shriek along with the Ramones. He's really delivers quite the impressive performance, I'm just glad he doesn't understand what "pulsating to the back beat" means... yet.

I am a little worried, however, that video game fever has gone a little too far. I'll leave you with a transcript of Ben's bedtime prayer from tonight - I think it says it all:

That is so funny! We are game nuts as well... Hey you all were having a little family fun bonding time! Nothing wrong witht that!