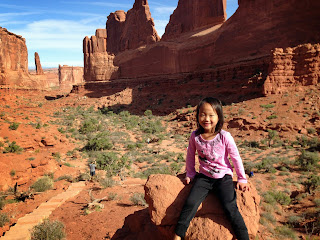 October was a big travel month for us! After camping in the world's largest organism and the boys' early-season ski training at Copper Mountain and before our family adventures in St. Louis, we enjoyed a fall break trip to one of our favorite camping spots - Moab Utah!

We hit our favorite locations and even discovered a new one - Moab never ceases to amaze. The weather was perfect, the company entertaining, and we only had one medical emergency*, so all in all it was a hugely successful fall break. 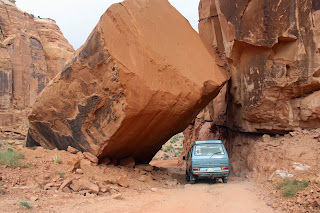 One of our camping buddies recommended an off-the-beaten-path drive between Dead Horse Point and the Potash Road and it was a blast! Rainy definitely couldn't have made it up the road (it got pretty intense in parts), but with gravity at our backs we enjoyed an adventurous "short cut" through the BLM land.

*Hey, you actually read through the post to learn about the medical emergency! Way to persevere. On our final night in Moab, WanYing was taking her sock off in her sleeping bag after I put her to bed and accidentally pulled off the bandages around her toes a week early. It was super traumatic for all involved - the stitches were still raw, WanYing was panicked, and I was all geared up for a late-night trip to the Moab ER (if there even is an ER in Moab!). But in a moment of brilliance I thought to call the SLC Shriner's Hospital and got straight through to the Charge Nurse. She agreed with my more rational side (the side that wasn't planning to head to the ER) that since everything looked ok with Ying's sutures we could just bandage it back up and hit the hay. Shew! Shriner's saves the day yet again! She ended up with a little infection in her toes, but nothing some Neosporin couldn't solve once we went to get her bandages officially removed the next week.
Posted by Jstar