I've tried, really I have, but the genetic and social pull of the nerdism is too hard to resist... Here are the boys' reviews of their 2 new favorite games.  I figure that as long as they get good paying jobs there's still hope that we can marry them off... eventually... 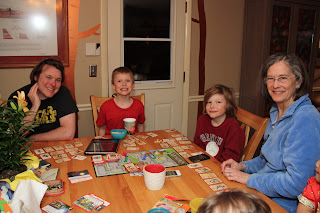 Ben: Munchkin is epicly awesome. It's amazing in every way possible. My favorite part is "stabbing my buddy" (the box says, "Kill the monster, steal the treasure, stab your buddy"). At school I played it and I liked it a lot and then I got it, but then when I got it Sam read the rules and I realized half of the rules my friends were making up! So I got mad. And then taught them the real way, although they still don't play exactly right. 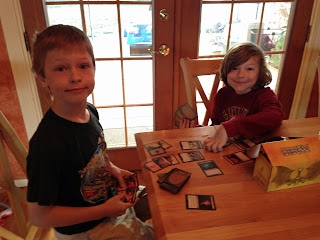 Sam: I first started playing Magic the Gathering at school. The first time I saw it my friend Carson was playing with Aaron. I asked Carson what it was and he said it was the ultimate nerd game, so I stayed away... for a while. But then they kept saying it was so awesome, I just had to go to Magic club just once, and just once is what it took. I don't know exactly what makes the game so awesome, I just like it. I'm not sure what genre you'd classify it in. It's sort of like Munchkin.

Ben: How I started playing Magic was actually a deal with Sam. He offered to teach me the game but I said only if I got to teach him Pokemon. So then I taught him Pokemon and he taught me Magic and he didn't like Pokemon. But I do like Magic.
Posted by Jstar