Two Down, Seven to Go 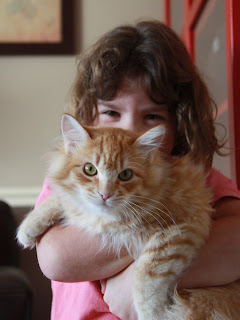 Just wanted y'all to know that, although Mandy has had a rather tough go of it, we have not killed him yet.  At least he hasn't gone through all 9 lives in the 7 months we've had him, and we'll consider that a victory for all of us.

Mandy is equally well loved and villainized here in the Morningstar home.  The girls adore his fluffy softness and lavish him with affection, which he often tolerates.  The boys, on the other hand, are convinced that the cat is a jerk.  It really bothers them that he a) attacks them frequently b) doesn't care if you yell at him and c) pretty much just does whatever he wants.  The boys are dog people for sure - they want their pets to care what they think.  And Mandy, most assuredly, does not. 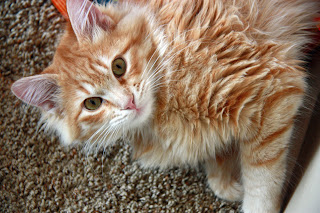 Mandy has also endured more emergency surgery than any other member of our home.  This doesn't endear him to Steve who usually has to handle the emergency vet trips.  Mandy has soundly lost two fights with neighborhood cats, respectively resulting in a shaved head and butt and 6 stitches in his hip.  Gross.  And hilarious.  We are hoping he either learns to stop fighting or to win soon, because this is getting expensive. 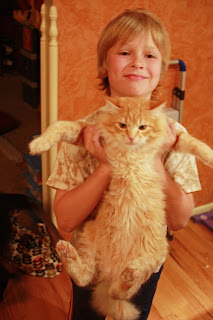 Two lives down, seven to go, and none lost to Morningstar children.  I'd consider that a fairly successful first 7 months of cat ownership.

(and judging by how frequently Ben carries the cat around like this, I think that the whole "I hate the cat" thing is just bravado)
Posted by Jstar