by Steve
Beijing is a pretty cool city. I know you've probably heard about the poor air quality here and how the city is almost always smoggy. That's totally true, but i think the gray air gives the city a kind of mystical quality at night the way the air glows from the lights everywhere. And it's way fun to blow your nose and look into the kleenex for your own little Rorschach blot. The soot in the air was evident as soon as we got off the plane. It's like you could taste the air.

The architecture is cool here too. There's the birds nest from the '08 Olympics and buildings with a wild "how is that thing staying up there" vibe. There's one that you can see out of Sam and Ben's hotel room that looks exactly like a pair of pants. Was really fun looking at that while watching a tv show about imploding buildings. And don't worry, there's been plenty of english TV shows for the kids to watch. Would hate for the poor dears to be bored in the hotel room. That makes them jump on things. Like beds, tables, chairs, people, parents nerves. 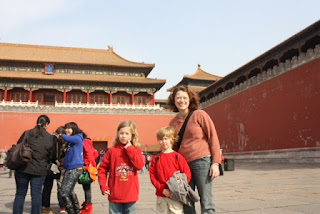 Today we woke up early and went down for breakfast. We've laid down the rule that the kids have to try something new at breakfast everyday. That way we can keep them eating and trying things that don't look normal to them. Luckily, fried doughy things were in abundance this morning so we may have them eating something other than Pocky.

After breakfast, we went out to tour through Beijing. First stop was Tianamen Square. We walked through the gigantic plaza area towards the Forbidden City and gaped at the largeness of it. 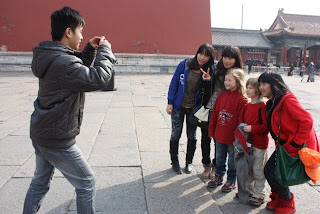 We kept walking toward the large Mao picture and into the Forbidden Palace. The Forbidden Palace is where the emperor of China used to live and it's now a large tourist attraction. Even tough we were allowed through the center part of it, there's still more than half of the palace that we weren't allowed to go into. Our guide, Forrest, was awesome about getting us through the palace and showing us all the cool parts without there being too much of a scene. We had to carefully choose the spot we took our pictures in because we'd often need to let the boys take pictures with all the people who'd ask for them.

See, little kids with blond hair must have been on some sort of photo scavenger hunt that all these people were on. They got so excited when the boys would pose with them. Like how some girls would get all flustered for Justin Beiber, these girls would go nuts for pictures with Sam and Ben. I'm actually surprised these doesn't happen at home for them as well. 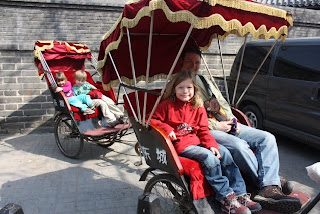 After the tour of the Forbidden City, we went on a pedicab tour of the old city with all the narrow alleys and cool looking doorways. The bike tour took us around houses and areas that were hundreds of years old. I'm pretty sure i saw two gentlemen playing mahjong that were hundreds of years old too. The sights and textures in the area gave a sense of the mystery about its age and the people who used to live in here. 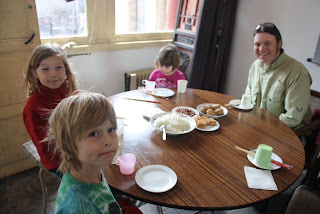 (Now Jamie is writing)
We had a very interesting lunch today. After the pedicab tour we ate a home-cooked meal in a private home. The family had been living in that compound for 250 years!

The kids struggled a little (unsurprisingly) but Sam was able to choke down some chicken meatballs and Ben ate his weight in white rice. They persevered with minimum wailing. Sasha, Steve, and I made up for the boys' lack of enthusiasm in spades.

Our pedicab tour guide (tour guides seem to have turf here, so Forrest is our overall guide, but when we get to a specific museum or area, then another guide takes over) was a young lady named Apple. Her story illustrates the journey of many young Chinese so starkly - her two-year-old daughter lives in another city with her mother and she lives 2 hours outside of Beijing and takes the bus in every day to give $5 tours to tourists. She gets to see her daughter every few months. Wow. Stories like Apple's sure drive home why so many parents feel unable to keep their little ones. What would Apple do if her mother couldn't parent her daughter while she's earning money for all three of them in the city?

We rounded out our very full day with a "tour" of the "porcelain factory" and "silk factory" (both thinly veiled ways to suck you into the gift shop, but interesting nonetheless), a nap, and a kung fu show. The show was *amazing* and we all left feeing placidly violent, which I believe was the point of the whole thing.

Ben, unsurprisingly, liked Monkey Style the best in the show. Sasha said she liked the doggies, which is a little odd since there was no dog in the show... but like the Buddhist monk/kung fu warrior who was the show's main character, I guess we must all make our own way.

Today's prayer request: Please join us in prayer for dispersed families like Apple's here in China. Pray for the parents who, unlike Apple, didn't feel like they had any alternative but to abandon their children to allow others to raise them. Pray for the healing of those who are without their children and those who are without their parents.
Posted by Jstar

I love, love, love your blog. Thanks for taking me on with you on your trip -- such a blessing for me. You and your fabulous family impress me so much. You will be in my thoughts and prayers.

What fun adventures you are having! How fun to be sharing these experiences with your kids! A trip they will never forget!