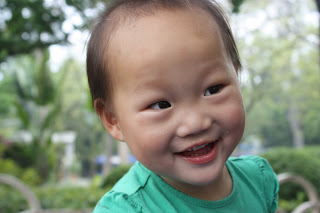 [Editor's note: Today marks our one-week anniversary with WanYing! It's hard to believe that we've only been together for 7 days... she already feels so much a part of the family.] 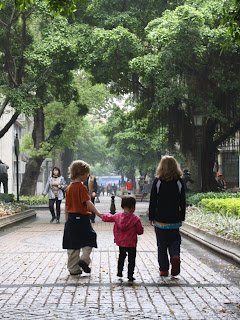 Today we had a quick appointment at the medical clinic to read WanYing's TB test. No reaction so we are clear medically to bring WanYing home. The other people who are traveling with us said their previous daughter who was adopted had failed the TB test and it was a pain to get that cleared and ready to go home. So glad we're not dealing with that. 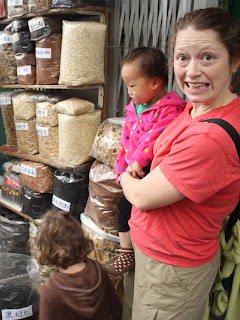 But if we were, I'm sure some of the medicinal aids we saw for sale today would help. Across the bridge from Shamian Island is a natural cure mecca for chinese people. You can find many different things that'll cure what ails you. There were mushrooms and herbs and roots and fish gills and sea horses and star fish and dried frogs and turtles and centipedes and scorpions. I really wanted to buy a scorpion and eat it, but our guide wouldn't let me. Said something about it being dangerous. Geez, what a kill joy.

I'll keep looking for them when little Miss "I'm worried about your safety" isn't around. I'm positive that would have helped me with my stomach ache. 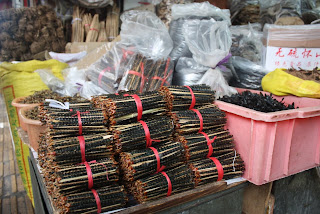 Yeah, I haven't been feeling good this afternoon. I think it's because of the stifling heat. It's hot. Even the people with us from Florida think so. I think it's like 90 degrees celsius or something. That's close to boiling! [Editor's note: I think it was more like 80 degrees Fahrenheit, but the million-percent humidity does add to the effect] 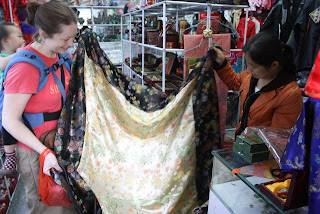 And the people from all the shops we visited said it was hot too. Jamie was on fire. Shopping wise I mean. If the shop keeper is crying when you leave the shop, you know you've bargained well. We've gotten gifts for each of WanYing's upcoming birthdays. Some stuff is really nice. Some stuff is more or less souvenirs. And all of it says "made in China." You know how hard stuff that says that is to find at home. 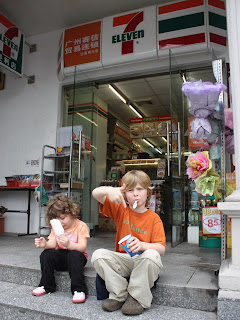 Jamie bought more squeaky shoes since we can't get enough of our little toddler smiling and squeaking at everyone she sees. I bought a new soft shell jacket that's from North Face. I can tell it's genuine since it says Winostopper on the sleeve (as opposed to the boring old "Windstopper" you can buy at home). Sam bought himself another remote control helicopter since his first one broke already. And Ben keeps spending his money on food. He's found 7-11 to be his best source for snacks like ice cream, Pocky Sticks and panda snacks. He even has his own "Sevvie" gang sign that he displays in jubilation whenever consuming a tasty convenience store treat. [Editor's note: Mommy even got our own treat at the Sevvie today - a demi bottle of "Great Wall" wine purchased for 23 RMB. It was everything you would expect for less than $3.] 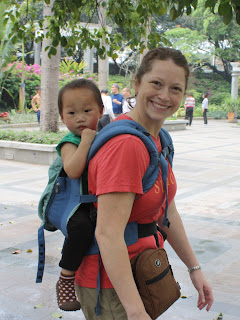 After all the shopping excitement, we hung out at the park behind Lucy's Cafe. The park had people of all ages enjoying the sunny day. There were people ball room dancing, playing Mahjong, practicing Tai Chi, and having organized sing alongs. Afterwards, we went to the White Swan hotel to take a picture of our little girls in matching dresses that Mommy purchased for them. It was hard to get a smile on either face, but after Mommy broke out the candies it became much easier. 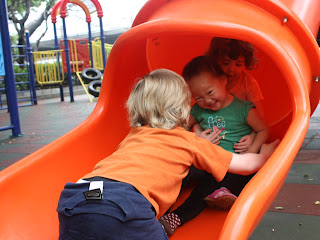 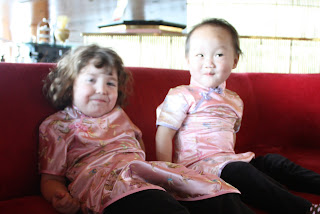 [Now Jamie is typing]
Today's prayer request:
Today was *so* much better in terms of WanYing's spirit and contentedness. Thanks for your continued prayers for our bonding journey!

Sasha, Ben, and Sam have done such a great job sharing Mom and Dad's attention with a demanding new sister. Please join us in prayer that they will continue to be assured in their hearts and through our words and actions that there will *always* be enough love in our family for all four kids, even when the balance of attention sways from time to time. And even more than any of that, pray that they will be assured that even when our attention or patience falls short they are *perfectly* and eternally loved by the God of the Universe!
Posted by Jstar

Love it! Love that you'll officially be able to stop all the winos that accost you in Utah Valley. Love the picture of the girls in their matching pink dresses! Love more pictures of Jamie (I've been missing her face!) Such fun!

Happy first week together!
I put two photos on my blog, I hope you do not mind.
WanYing every day seems happier.

One of the things I have loved about reading your posts with both Sasha and now WanYing is how completely accepting Sam and Ben are of their new siblings. Seeing Sasha with YanWing is once again evidence of the fabulous job you have done raising your children. It makes me a little teary.

Love catching up after a few days offline. I know the trip is rough & trying. And, those first few bonding days are so thrilling, yet so terrifying. I am confident that you guys are doing a fabulous job & can see that in the pictures and the writing. Hang in there and know that many prayers for serenity, patience, and mastering frustration are coming your way. Rubber legs are SOOO frustrating....but, they give way to strong sturdy legs soon.
Best,
Amelia

Brad and I loved reading this post! You guys are cracking us up! Glad you are having a great time and that WanYing is doing better today!