The Craziest Child Ever Created 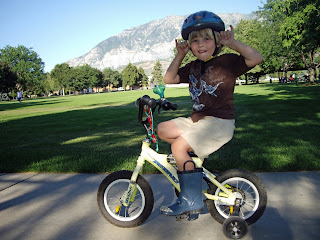 I have determined that Ben is the craziest child ever created. I know that many of you came to this conclusion some years ago, I'm just a little slow on the uptake.

Here is a photo of him riding his bike to the park - shark boots on and giving some sort of classic "I'm an insane child" pose. I think the photo pretty much sums up our child - quirky and hilarious and affectionate and prone to give his brother noogies and/or tackle him and then run away screaming when angry (ok, that probably doesn't come through in the photo, but it's true nonetheless). 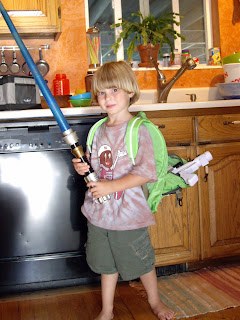 Here's a great Ben photo from last night. He's been wearing his new green bookbag around pretty much nonstop since it arrived from L.L. Bean at the beginning of the week, I guess he's just trying to break it in before school starts on Monday. Last night he loaded it up with a clone trooper blaster and light saber, explaining that he must be a padawan because padawans are the ones who carry packs. Who can argue with logic like that?
Posted by Jstar