I would have gotten into sports much earlier if I had known there was unlimited ice cream... 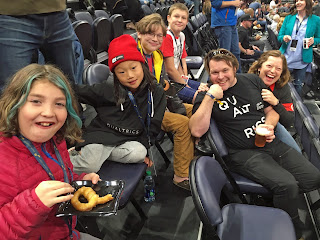 Saturday we had the distinct pleasure of attending a Utah Jazz game... from the fifth row... with a courtside box... and unlimited ice cream. I think we all would have gotten into sports a lot earlier if we had known it could be like this!

My company, Qualtrics, purchased the patch space on the Utah Jazz jersey this year to advertise 5 for the Fight, our cancer research charity. It's a super cool charity, and Qualtrics has pledged $50 million to cancer research. It's a lot to celebrate. 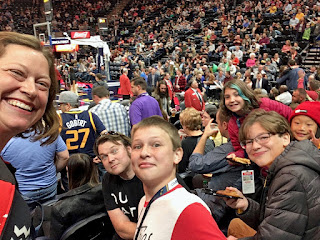 Anyway, as a part of our Jazz sponsorship, we also have a supercool courtside suite and this weekend the Morningstar Family got the chance to enjoy it!

Now, I know that you're thinking that you didn't realize we were such big sportsball fans. I'll admit that our knowledge of basketball up until Saturday morning was... cursory at best (i.e. the ball is orangeish and you get 2 or 3 points per basket). 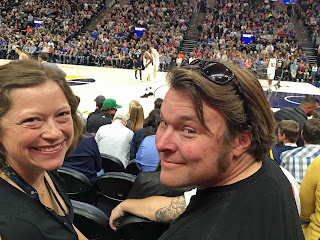 But we were committed to making the most of this basketball experience, so much so that we found a basketball rules primer on YouTube and watched it until we could recite it from memory. Also, we watched Space Jam Saturday afternoon in preparation. The movie was, candidly, less helpful than I had hoped but it had its entertaining moments. 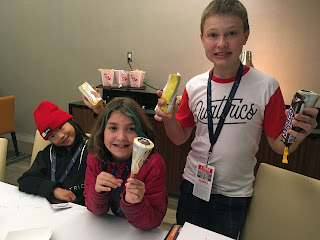 Anyway, the game was a huge success. We ate plate after plate of free food and drank as much soda and beer as we could, in good conscience, consume (it was all pre-paid, so we figured we had a moral obligation to make the most of the company's investment). We also discovered in the second quarter that there was unlimited ice cream so, yeah, we tried every kind. Multiple times. 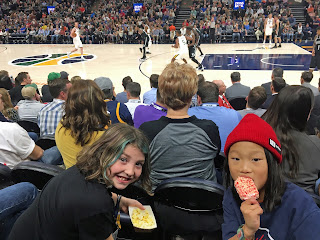 And the game was really fun! It definitely helped that it was a high-scoring game and we won. [Sam: Why do we always say we won? We had nothing to do with it! Me: There's no i in Team. Hush and eat more ice cream]

We also (mostly) clapped at the right times although Sam did get confused at the side-switching mid-game and started cheering for the opposing team's baskets.  In his defense, it kind of is confusing that they switch sides.

Also, note that we have food in our hands in every picture. and it's never the same snack twice. I'm really proud of us. 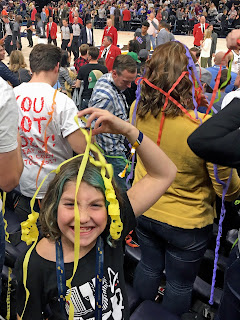 We had an excellent night at the Utah Jazz. I can confirm right now that if you ever have box seats at any sports event that you want to give us for free, we will gladly take them off your hands! We will even pledge to prep on the rules of said game so as to (mostly) not embarrass ourselves or you.

And what we lack in actual knowledge, we more than make up for in enthusiasm and appetite!
Posted by Jstar