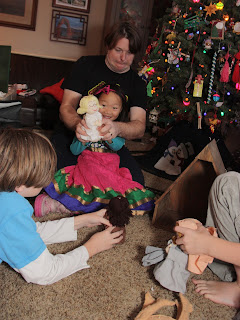 As always, our Christmas Eve was a blast and chock full of holiday fun, bookended by the nativity story (of course!). And, as always, both readings of the Christmas Story were... nontraditional.

We started with our annual tradition of reading the Christmas Story and acting it out with the nativity set that Steve's mom and Dad made Sam for his first Christmas.

This year we mixed things up a bit and Sash opted to read while the other kids acted out their parts. As a direct result, the story was a lot less chaotic and violent than usual, although Ben did his part to keep it exciting, as evidenced by the beans that beanbag Mary started leaking halfway through her ordeal. Poor Mary. And it must be said that Sasha made an excellent narrator. 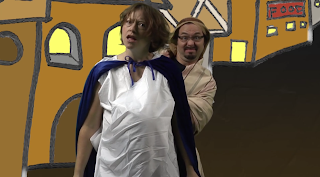 And we ended with Christmas Eve service at church where Steve and I and several other members of our congregation acted out another entertaining retelling of the Christmas Story. Think Drunk History with kids as narrators instead of tipsy celebrities and the grown-up cast making fools of ourselves and you'll get the gist of it.

It turned out brilliantly! You should totally check out the whole video at https://vimeo.com/149823606 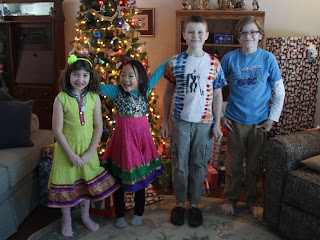 And between our two nativity stories, we had a heck of a day.

As usual, we opened presents on Christmas Eve. We started this tradition a few years ago to
So once we were dressed and nativitied we packed up and headed down the street to Grammy's house for french toast, mimosas, and loads of present opening.


We had a beautiful Christmas Eve, filled with the joys of giving, worship, laughter, and banjo. Just like it should be.
Posted by Jstar