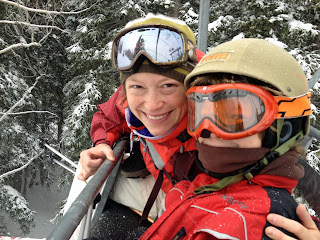 Wahoo!  Ski season has started for the Morningstar clan!

It's still definitely early season (we hit some rocks and endured some sleet) but we are not about to complain about a few nicked edges after a particularly crummy last year.  If today's season start is any indication, this is going to be a great ski year for our family! 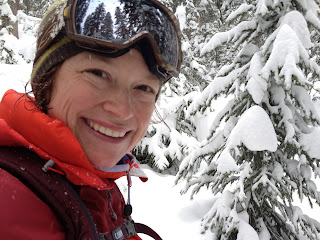 This morning we decided to "worship on the mountain" (the ultimate cop-out for not going to church, but a poetic one nonetheless) and headed up to Brighton to catch some turns.  I was particularly proud of my tele turns and endurance - I didn't turn in until 3, which is a pretty long day, especially for the first day of the season.  I normally can't make it through a 6 hour ski day so maybe the biking is doing some good! 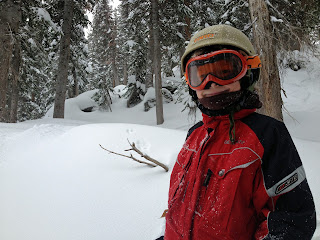 Sam had a good day as well.  My favorite part of skiing with Sam today was his enthusiastic participation in the tree skiing.  We hit some fairly tough glades (this is what happens when Mommy leads) and he did it all with style (or at least without death or injury, which is our definition of a successful run).  I was very proud. 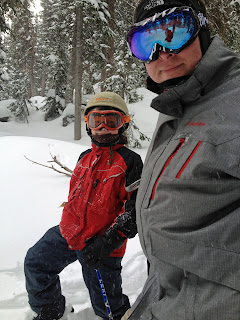 And Steve hit the slopes for the first time in a year today as well.  Although his leg was really hurting him from the break in January, he muscled through and did a whole morning of lovely tele turns.  We'll have to play around with tele and alpine and snowboarding gear and see what feels best on his shin.  But at least he got to get back on the horse (skis) and spend a happy family morning in the snow!

Now to figure out how I can take the next 4 months off of work... still get paid... still have a job to come back to... and ski every day...
Posted by Jstar