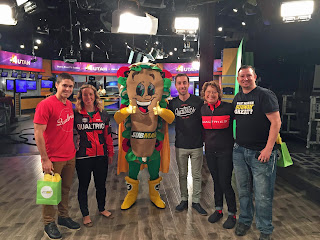 Last weekend brought the biggest ride of our cycling year - the Huntsman 140!

There are so many reasons to love the Huntsman 140:

Mostly it was a week of early mornings and good fun, starting with a spot on the morning news (you have to watch it on a computer to see the spot, phones won't play the video). 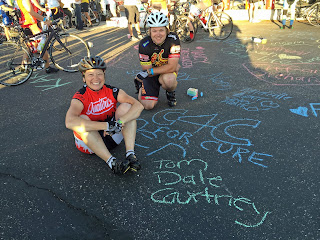 Coming off of that much excitement was a challenge, but before we knew it it was Saturday at 5 am and time to drive 2 hours to Delta, Utah (the middle of nowhere) to start pedaling!

This year Steve and I both rode the Huntsman. We were privileged to ride in memory of Steve's mom, Sharon, and our high school friend, Pat, both of whom we lost far too early. We also rode in honor of our friends Tom and Dale who are both fighting cancer right now. We love them all and held each in our hearts during the ride.

Our joint Huntsman ride stopped at mile 35 when Steve had a bit of a mishap involving his body and the road. Fortunately, there was an ambulance close by and a good friend ready to pick Steve up and take him to instacare. 5 stitches and yards of gauze later, Steve was battered but ok. It was definitely not how Steve planned to spend the day, but we're grateful that he could walk away from what could have been a pretty bad accident. 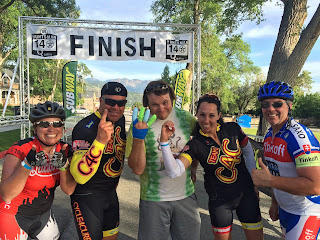 It was a tough day, and we remain proud and grateful to be able to suffer for those who are suffering, raise some money for cancer research, and encourage those who are on really tough journeys. Another Huntsman 140 down!
Posted by Jstar